RUTH BADER GINSBURG, 1933-2020: Trump pledges woman for court, pushes Senate to move on pick | How Ginsburg's death could reshape the election | How to honor RBG by supporting her favorite causes
Home » Sports » 'No love' between Flyers…

‘No love’ between Flyers and Canadiens heading into Game 6

A Montreal player got ejected for a hit from behind. A Philadelphia player got suspended for a cross check to…
Listen now to WTOP News WTOP.com | Alexa | Google Home | WTOP App | 103.5 FM

A Montreal player got ejected for a hit from behind. A Philadelphia player got suspended for a cross check to the face that caused a broken jaw.

This is the classic Canadiens-Flyers series that history showed was coming. Don’t expect players to engage in an all-out brawl in warmups like Chris Chelios, Ron Hextall and teammates did during the 1987 playoffs, but Game 6 of this first-round series Friday will have plenty of hatred to spread around.

In Game 5, Canadiens forward Jesperi Kotkaniemi’s hit on Travis Sanheim led to some stitches and a major penalty and ejection. Philadelphia defenseman Matt Niskanen’s stick also got up in Brendan Gallagher’s face and broke his jaw.

The Canadiens ruled out Gallagher for the rest of the series because he needs to leave the Toronto bubble for surgery. It’s a big loss for Montreal; associate coach Kirk Muller called Gallagher “the heartbeat of our team.”

Niskanen was suspended for Game 6 (7 p.m. EDT, NBC Sports Network) after the NHL’s department of player safety determined he was reckless with his stick but did not intend to hit Gallagher in the face. Vigneault called it “a hockey play.”

Even without Gallagher, there’s still plenty of fight left in the Canadiens, the 12th seed in the Eastern Conference who knocked out Pittsburgh in the qualifying round and keep fighting back after falling behind 3-1 to Philadelphia. Tensions being up in this series for big hits, questionable ones, some post-whistle kerfuffles and even 21-year-old budding star Nick Suzuki patting Flyers goalie Carter Hart on the head after giving up a bad goal.

Desperation only brings the best out of Montreal’s young group.

“It’s playoffs, so every game, the intensity is going to get higher,” forward Charles Hudon said. “One game, if we lose, we’re out, so I think all our energy’s going to go for the next game and pretty much every single shift. Who cares what they did, who cares what we did, but I’m pretty sure next game’s going to be a good one.”

That’s one thing the Canadiens and Flyers agree on.

The defending Stanley Cup champion St. Louis Blues blew a two-goal lead in Game 5 Wednesday night and now face the prospect of being eliminated in the first round by the much less experienced Vancouver Canucks.

“We’ve been there before: We know how to win these games and how to play them,” Berube said. “This is what our team is built for. I told them at the beginning of this series that it’s going to be a long series, and this is how we play. This is our game. We wear teams down over time in a series, and we’re going to get to a Game 7.”

Canucks coach Travis Green knows the competition his team is facing and said, “We’re going to see their best.” But no one knows what goaltender Vancouver will face because Berube hasn’t announced his choice between Binnington and Jake Allen, who has played the past three games.

Allen has been much better in this postseason, though Binnington was in net when the Blues won the Cup.

“You’ve got to look at what your goalie did in the past at certain times and what he’s done this year at certain times,” Berube said. “Jake Allen came in and did a real good job for us, and to me Binner at the start of the playoffs here in the round robin was excellent. They’re kind of like our team right now.”

That is to say, they’re not perfect. But St. Louis is the kind of team that can wear down an opponent over the course of a series and is right in it if it plays to the big, heavy, hard-working identity that got the job done last year.

“We get pucks deep and we go to work and we grind teams down and that’s what we’ve got to do,” Berube said. “We’ve got to move the puck quicker. When we’re moving the puck quick, advancing it through the neutral zone, getting it in the offensive zone and getting after it, that’s our game.” 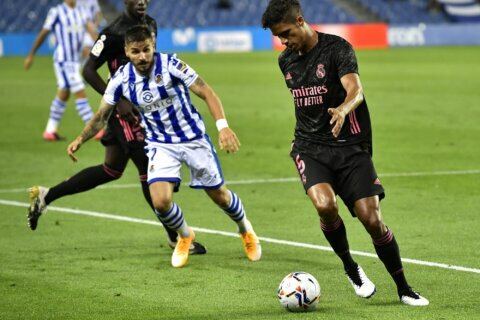