Signs ominous and hopeful as college sports hangs in balance

The announcements came within 40 minutes of each other Wednesday morning, one bleak, the other providing a glimmer of hope…
Listen now to WTOP News WTOP.com | Alexa | Google Home | WTOP App | 103.5 FM

The announcements came within 40 minutes of each other Wednesday morning, one bleak, the other providing a glimmer of hope for a college football season that is looking iffy at best right now.

First, Connecticut canceled what was supposed to be its first season as a major college football independent because it could not endure the strains of the coronavirus pandemic.

Then the Big Ten unveiled the conference-only schedule it devised to withstand COVID-19 disruptions, with football games slated to kick off in a month.

Those two decisions epitomized the current state of college sports and help explain why the NCAA Board of Governors on Wednesday directed each division of the association to decide independently by Aug. 21 whether it will be able to safely conduct championship events in fall sports such as soccer and lower-division football.

NCAA President Mark Emmert told The Associated Press that whether college sports, and more specifically major college football, can play through the pandemic is likely to be determined not by the association or even conferences.

“It’s actually going to have to be each institution,” Emmert said. “You have to look at the huge variability around the country. When you look at what are the facts on the ground in Syracuse, New York, versus Miami, Florida, they’re very, very different. And those schools are going to have to operate consistent with their local municipal policies, their state policies, federal policies, and then also whatever they decide collectively in the conference.

“So it really isn’t the time where you can say we’re going to have one rule to govern all of football or all of any sport in that sense.”

Instead of making a broad decision across three divisions, the Board of Governors set parameters for each to make its own call.

Within hours of the board’s announcement, presidents councils from both Division II and III canceled fall sports championships and determined they will not be made up in the spring.

According to the board’s decision, at least 50% of teams competing in a fall sport in any division must conduct a regular season this fall for a championship to be held.

The board emphasized that all fall sports activity, whether it be preseason practices, regular-season games or postseason national championship tournaments, must follow the NCAA’s return-to-sport guidelines.

“What we did today with the board is we said, look, you have to meet these kinds of standards and you have to provide these kinds of opportunities and this kind of information to students to even move forward on this,” Emmert said.

The NCAA has little, if any, control over the highest tier of Division I football, where the Big Ten competes with the other Power Five conferences, the Big 12, Atlantic Coast Conference, Southeastern Conference and Pac-12.

Those leagues along with the five other FBS conferences have methodically put plans in place to play a season that will be worth billions in revenue — most of it landing in the Power Five.

The commissioners of those conferences talked a lot about collaboration, but in the end each league did what was in its best interest.

The NCAA’s main role has been to provide guidelines for how to attempt to mitigate the risk of COVID-19 as athletes return to campus, practice and ultimately competition.

The NCAA cannot stop regular-season competition. When the board considered pulling the plug on fall championships last month, conference leaders throughout all of Division I pushed back. There was even discussion among the most powerful conferences that they could stage their own championship events without the NCAA.

The pandemic has exposed college sports’ lack of clearly defined, top-down leadership, though Emmert said the current problems wouldn’t be easier to solve with a different structure.

“We’re at a place where all of the answers to all of the questions are complicated because they are very complicated questions,” Emmert said. “And so I guess I understand people that say, ‘You know, somebody make a decision.’ And I would hope that those same people would recognize that I and my board are more than willing to make decisions. We did it in March (canceling the NCAA basketball tournament).

“This isn’t about any one person or any one group not wanting to take leadership. It’s about trying to find the right answer for our student-athletes and it’s complicated. And anybody that doesn’t recognize that is not paying attention.”

Around the same time the NCAA made its announcement Wednesday regarding fall championships and other issues related to COVID-19’s impact on college sports, a second players’ rights movement announced its formation.

#BigTenUnited joined the “ WeAreUnited” group of Pac-12 players in making an organized call for more transparency, oversight and monitoring of COVID-19 testing and standards.

The Big Ten players focused solely on COVID-19 protocols and targeted the NCAA more than their conference.

The NCAA’s directive addressed some of the issues raised by both groups, including retention of scholarships and eligibility if an athlete opts out of the coming season because of COVID-19 concerns.

The NCAA is also setting up an email address and phone hot line to allow athletes, parents and others associated with college athletic departments to report “alleged failures” of COVID-19 protocols and guidelines.

“When we as players are united, our voices will be heard. These are important victories but players still don’t have any uniform, enforceable COVID standards to keep players safe,” Washington State defensive lineman Dallas Hobbs said in a statement released by #WeAreUnited.

Emmert said the burgeoning player movements were not discussed by the board and neither group has communicated with the NCAA.

“But that’s not to say that this wasn’t the result of a lot of conversations with students,” Emmert said.

Later in the day, the College Football Playoff put another piece to this jigsaw puzzle of season in place by announcing that the selection of the four teams to compete for the national title would be delayed two weeks to Dec. 20.

It was another sign of hope — coming not long after Louisville announced it had suspended team activities in men’s and women’s soccer, field hockey and volleyball after 29 athletes tested positive for COVID-19.

“There is no guarantee,” Big Ten Commissioner Kevin Warren said on Big Ten Network, “that we’ll have fall sports or a football season.” 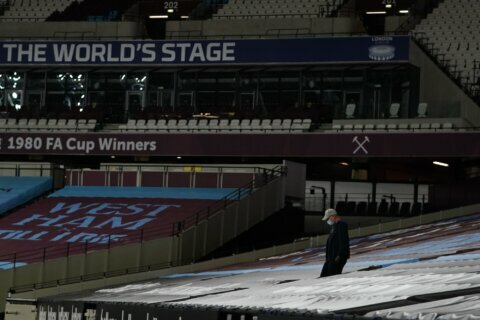