A look at what’s happening around European soccer on Friday with the resumption of the Champions League round of 16…
Listen now to WTOP News WTOP.com | Alexa | Google Home | WTOP App | 103.5 FM

A look at what’s happening around European soccer on Friday with the resumption of the Champions League round of 16 that was put on hold in March:

During the suspension of the Champions League, Manchester City overturned its two-season ban from European competitions to ensure it will be back next season. Now Pep Guardiola’s side can focus on trying to protect a 2-1 lead over Real Madrid to reach the quarterfinals. City completed the Premier League strongly, scoring 25 goals and not conceding in its last seven matches, although Guardiola’s side finished runner-up and was beaten by Arsenal in the FA Cup semifinals. Madrid travels to Manchester as Spanish champions after taking 30 points from 10 matches following the restart after the pandemic-enforced break in the season.

Despite securing a ninth successive Serie A title, Juve’s form after the restart has been patchy. There have been four losses and two draws in 12 matches and an Italian Cup final defeat on penalties to Napoli. Lyon lost two cup finals to Paris Saint-Germain after the restart. Winning the Champions League is the French side’s only chance of qualifying for Europe next season following a seventh-placed Ligue 1 finish. Lyon has been boosted by Memphis Depay’s return from a long-term knee injury as it seeks to hold on to their 1-0 advantage over Juve.

The quarterfinal lineup is completed Saturday. Bayern Munich holds a 3-0 lead over Chelsea, while Barcelona hosts Napoli with the away-goal advantage secured from a 1-1 draw. 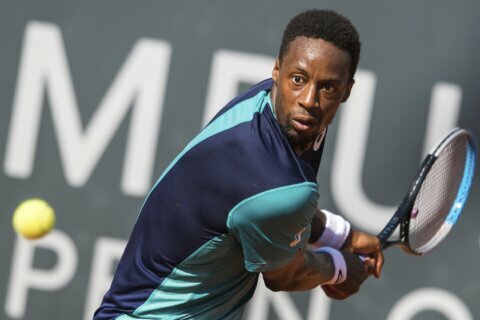 Medvedev beaten in Hamburg after run to U.S. Open semifinals