RUTH BADER GINSBURG, 1933-2020: Trump pledges woman for court, pushes Senate to move on pick | How Ginsburg's death could reshape the election | How to honor RBG by supporting her favorite causes
Home » Sports » MATCHDAY: Barca-Napoli, Bayern-Chelsea in…

A look at what’s happening around European soccer on Saturday with the remaining Champions League last-16 games:

Having sealed a Europa League spot by winning the Italian Cup, Napoli faded to a seventh-place finish after the resumption of Serie A in June following the pandemic shutdown, with just two clean sheets in 12 league matches. Key forward Lorenzo Insigne is an injury concern for Napoli. Barcelona will try to build on the away-goal advantage with midfielders Sergio Busquets and Arturo Vidal suspended, Samuel Umtiti injured. Fellow center backs Clement Lenglet and Ronald Araujo, and forward Antoine Griezmann have recovered in time for the second leg that was originally due to be played five months ago.

Bayern will be without Kingsley Coman due to a muscle injury, and coach Hansi Flick will choose between Ivan Perisic and Philippe Coutinho to replace the winger. The German champion’s last competitive match was on July 4, the 4-2 cup final victory over Leverkusen, leaving Flick conscious of Chelsea arriving in Munich with much greater match sharpness after playing in the FA Cup final a week ago, losing to Arsenal. Chelsea secured Champions League qualification only on the final day of the English Premier League by finishing fourth. Now the London club has an extensive injury list which includes Cesar Azpilicueta, Christian Pulisic, Pedro, Willian, N’Golo Kante, Billy Gilmour and Ruben Loftus-Cheek.

Cristiano Ronaldo’s two goals could not prevent Juventus from being ousted by Lyon. Despite a 2-1 loss in Turin, Lyon advanced on away goals after a 2-2 draw on aggregate. Lyon will play Manchester City in the Aug. 15 single-match quarterfinal. Raheem Sterling and Gabriel Jesus seized on defensive mistakes to lead City to a 2-1 second-leg victory over Real Madrid after winning by the same score in the Spanish capital in February. 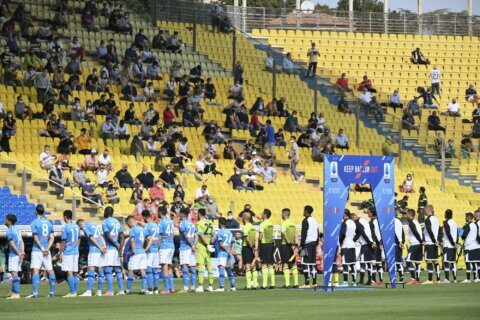