Koepka’s hip, not the knee, causing a problem at the PGA

SAN FRANCISCO (AP) — Brooks Koepka came into the PGA Championship concerned about a left knee that may or may not require more surgery when he gets a chance to catch his breath.

But that’s not what had him sprawled on on the ground at Harding Park while a trainer work on him.

The two-time defending champion said his hip felt tight when he woke Friday. He worked out and it didn’t get much better. And even after he loosened it up, the tightness returned when he was warming up on the range.

His trainer came out on the 12th hole, and then twice more on the back nine, all while Koepka was hanging around the lead by not losing any ground. Any concern going into the weekend?

“Nothing to be worried about,” Koepka said. “We’ll loosen it up again and it will be a lot better.”

Koepka said his tensor fascia latae — a hip muscle — occasionally gets tight on the side.

“It just kind of moved to the front and tightened up the front and kind of the inside and groin,” he said. “Where I really felt it was off 12 tee. It just like locked up, cramped, and I couldn’t really do anything with it.”

Marc Wahl, his trainer, came out and stretched his hip and then returned twice more. Koepka isn’t sure exactly what he did toward the end, only that it worked.

“The one going into 16, where he yanked on my foot, I don’t know what Mark does, but it popped and it felt like it just kind of re-positioned itself, and that’s when it felt a lot better,” Koepka said.

Hey, he’s not scientist. And he said he’s not worried about it. Koepka goes into the weekend two shots out of the lead in his quest to win the PGA Championship for the third straight year.

Even with no spectators, someone managed to accidentally step on Rory McIlroy’s golf ball right of the green on the par-3 third hole. Under the rules, he could replace it in a position as close to what it was before it was stepped on.

And then he chose to place it a little deeper in the grass. McIlroy felt the new lie was too good.

“I just wouldn’t have felt comfortable,” he said. “I placed it, and the rule is try to replicate the lie. No one really knew what the lie was, but if everyone is going around looking for it, it obviously wasn’t too good. So I placed it, I was like, ‘That just doesn’t look right to me.’ So I just placed it down a little bit.”

He chipped to 20 feet and made bogey, and had no regrets.

“At the end of the day, golf is a game of integrity and I never try to get away with anything out there,” McIlroy said. “I’d rather be on the wrong end of the rules rather than on the right end because as golfers, that’s just what we believe.”

Normally, the fans would’ve gone wild. Normally, it would’ve been an albatross instead of an eagle.

Nothing is normal this year at Harding Park, but Mark Hubbard isn’t complaining.

He holed out from 236 yards in a bunker on the ninth hole — the toughest on the course — to eagle a hole that normally plays as a par 5 for the paying public.

“I’ve never had an albatross before, so I’m just going to go ahead and count it,” said Hubbard, playing in his first major.

He shot 71 to make the cut on the number.

He said he heard some applause from the volunteers and scorekeepers on the course, which is not allowing fans because of the COVID pandemic.

No matter. It was a sweet memory for his first major.

“I needed it for my round, but it was also one of those things that no matter what happens after this, I’m going to remember that shot for the rest of my life,” he said.

Mike Lorenzo-Vera of France had a chance to join Li Haotong in the lead, a tall order considering he needed a birdie on the tough ninth hole to end his round. With shots into the thick rough, he wound up making a 15-foot putt for bogey. That gave him a 68, leaving him two shots behind.

American fans might not know enough about the Frenchman, who is No. 82 in the world despite not having won on the European Tour. His only pro win was on the Challenge Tour in 2007, and then his game went sideways.

Lorenzo-Vera was brutally honest in a brilliant blog for the European Tour’s website in February. That included this gem of a tale of how he started to turn his game around.

“By the end of 2013 I was kind of lost,” he wrote. “I’ll never forget the moment when I realized how lost I was. I was sitting on the couch at home and the golf was on TV. I was watching David Horsey in a European Tour event and he was going well. Now this is nothing to do with Dave, but I remember saying out loud ‘How can this guy be doing so well? I was beating him and so many others before.’

“Then my girlfriend looked at me and said, ‘Because he’s better than you.’ I said no he’s not and she’s like ,‘Where are you now, you’re on the sofa, nowhere on the Challenge Tour and he’s playing well on the European Tour so he’s better than you, that’s it.’ This was from a girl that doesn’t know anything about golf, and I was like, ‘She’s right.’ So where do we go from there? That was it. I was on the ground, the bottom of the sea, and that was the moment that I decided to push myself to the surface.” 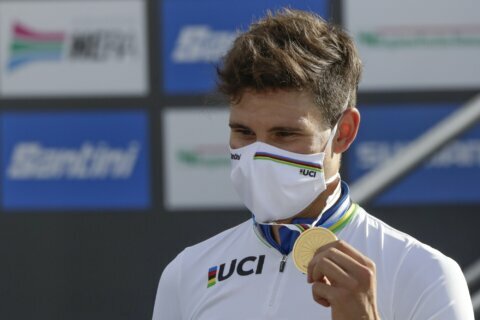