Vegas won its second-round opener against Vancouver by scoring five goals. The Canucks returned the five-goal favor in Game 2.

The tone is set for a high-scoring series, and good luck figuring out who’s got the edge heading into Game 3 on Thursday (9:45 p.m. EDT, NBC Sports Network).

Vegas went into Game 1 with a goalie controversy of sorts when Marc-Andre Fleury’s agent posted an illustration of the goalie with a sword in his back on social media. Robin Lehner shook off the distraction and stopped 26 shots in the Golden Knights’ 5-0 victory.

The Canucks flipped the ice in Game 2, revving up their offense for a 5-2 win. Jacob Markstrom bounced back to stop 38 shots after being pulled in Game 1, Bo Horvat scored twice and the Canucks skated freely through the Golden Knights most of the night.

“We definitely gave them a lot of room,” Vegas center Jonathan Marchessault said. “They’re skilled players and they were coming into the zone like it was nothing. It’s too easy. We make life easy out there for them, so it’s on us to go back to how structured we were in the first game.”

Game 3 in the Edmonton bubble will hinge on which team can make the biggest adjustment and slow the other down.

Of course, after two five-goal games, it could end up 1-0.

The Islanders won the opener 4-0 behind Semyon Varlamov, who stopped 29 shots. Philadelphia chased Varlamov before the first period in Game 2, but had to hold for a 4-3 overtime win Wednesday after after blowing a three-goal lead.

Philippe Myers scored the winner in overtime, tying the series at 1-1 and giving the Flyers a huge sigh of relief with a short turnaround before Game 3 in the Toronto bubble.

“Every game is important, but tonight was probably the most important game of the season,” Flyers center Kevin Hayes said. “We responded. I thought our team played well. It’s huge. It’s a back-to-back game, you have an overtime win. we’re feeling good about ourselves, but they’re obviously going to come hard tomorrow.”

Varlamov had been sharp, becoming the first Islanders goalie to post consecutive playoff shutouts while stretching his scoreless streak to 136 minutes, 20 seconds. In Game 2, he allowed three goals on 10 shots and was replaced late in the first period by Thomas Greiss, who stopped 18 shots.

Now New York must decide whether to start Varlamov again or bring back Greiss for Game 3.

“I was looking for a spark,” Islanders coach Barry Trotz said. “I thought we didn’t help enough. They had three goals and I was looking for something a little bit different. Not his fault. We didn’t give him enough support, so we can share the blame as a group and refocus for tomorrow.” 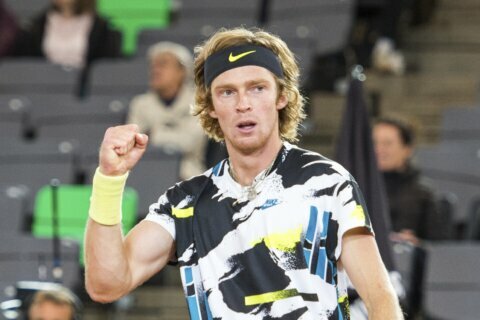