NASHVILLE, Tenn. (AP) — The NHL’s winningest general manager is not happy with the Nashville Predators’ diminishing returns, and David Poile made it clear Thursday that change is coming.

“Bottom line, this is unacceptable,” Poile said in a video conference call. “And this is how we have to view this result is that we have to be better, and it’s not acceptable.”

Since winning the Western Conference and losing in the Stanley Cup Final in 2017, the Predators have had shorter postseasons each year with the latest a disappointing loss in the best-of-five qualifying series in four games to Arizona.

Poile already made one change this year, firing Peter Laviolette and hiring John Hynes in early January. Poile said Thursday that coaching change was made to improve the team’s culture.

That move followed the franchise’s first Winter Classic, a game in which Nashville jumped out to a 2-0 lead only to lose both the game and defenseman Ryan Ellis to injury. Poile said that game typified much of Nashville’s season with strong play and a nice lead only to crumble into a loss.

The Predators at least moved up from No. 17 to No. 11 in the first round of the NHL draft scheduled for Oct. 9-10, and Nashville has two selections in the second round and two in the third to help stock up the talent pipeline.

Poile has to decide what to do about pending free agents Mikael Granlund, who played on the second line, and Craig Smith, whose goals and points totals has gone each of the past two seasons and will be 31 in September. Kyle Turris, due $6 million a year through 2023-24, could be an option to buy out his contract.

Nashville’s front office used the NHL pause meeting almost weekly to break down each of the Predators and get a plan together for what will be a unique offseason with a flat salary cap for next season.

“We’ve previously identified what changes that we thought we’d have to make or want to make for the ‘20-’21 season, and then it obviously it’s solidified or readjusted based on what we did or didn’t do against Arizona,” Poile said. “So I think we’re organized.”

Nashville currently is projected to have $21.8 million of space under the $81.5 million salary cap. The Predators’ cheapest way forward will be tapping the talent that has been growing in Milwaukee with their American Hockey League affiliate.

Poile and coach John Hynes both mentioned forwards Eeli Tolvanen, 19-year-old Philip Tomasino, Rem Pitlick and Yakov Trenin and defensemen Alexandre Carrier and Jeremy Davies as players who will have a chance to earn roster spots in training camp.

“All I can say and will say at this time that all options are on the table to make our team better for the ‘20-’21 season,” Poile said. 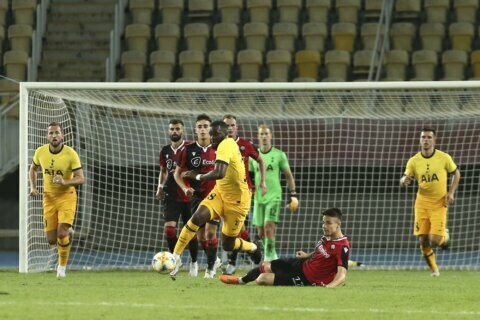