Barcelona’s Ansu Fati has been called up to Spain’s national team for the first time on Thursday as coach Luis Enrique revamps the squad ahead of its return to competition.

Youngsters Eric García, Ferran Torres and Óscar Rodríguez also were called up for the Nations League matches against Germany and Ukraine in September, as was Wolverhampton player Adama Traoré.

“If the European Championship was to be played tomorrow, this would be my team,” Luis Enrique said. “All players have to take a step forward, whether they are 17 years old or 19 years old or 33 years old.”

Fati, a 17-year-old forward born in Guinea-Bissau, chose to play for Spain and had already been summoned for the nation’s under-21 squad.

“Ansu Fati is at a level in which he can be here with us,” Luis Enrique said. “His numbers are excellent even though he hasn’t played much. He has what it takes to become an important player. I want to see him training with us.”

Luis Enrique said he has been following Traoré for a while.

“He has improved a lot,” the coach said. “He’s a diamond with a beastly potential.”

Luis Enrique made the announcement in a video that also featured him placing face masks in each player’s locker. The video was released by the Spanish soccer federation.

Spain will visit Germany on Sept. 3 and then will host Ukraine three days later. Players will report to the team’s training center in Madrid on Aug. 31.

It was the first team Luis Enrique has named since he returned to the national team following an absence of more than a year prompted by the death of his young daughter.

The team’s last squad announcement had been in November 2019. 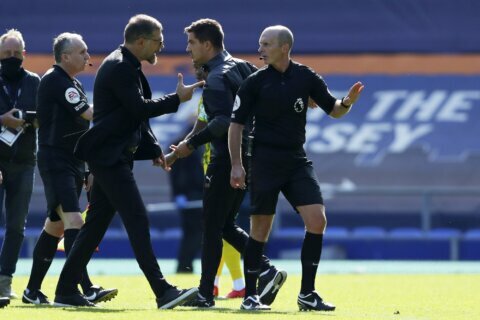