The Court of Arbitration for Sport upheld the ban imposed by FIFA and said Keramuddin Karim committed “appalling acts” against players who accused him of sexual and physical abuse over a five-year period from 2013.

Special security measures were taken to protect the players while they testified in support of the ban,

“The players testified from a secured place, by telephone, using a voice scrambler to protect their identity,” the court said.

FIFA said in a statement it “commends the bravery of those victims who, under dreadful personal circumstances in their home country, have come forward and allowed for justice to be served.”

CAS dismissed Karim’s appeal against the ban and fine of 1 million Swiss francs ($1.06 million). That is the maximum fine allowed by FIFA rules.

“The offenses committed by Keramuddin Karim violated basic human rights and damaged the mental and physical dignity and integrity of young female players,” CAS said in a statement. “With his appalling acts, he had destroyed not only their careers, but severely damaged their lives.”

The FIFA ethics committee banned Karim in June 2019 during the Women’s World Cup in France after an investigation into allegations by women and girls in national team squads.

The allegations were first published in media reports the previous year.

FIFA said it would not tolerate “physical, mental and sexual abuses at all levels of football.”

“FIFA has also recently published a minimum ‘package of care’ to support victims who wish to come forward and has adopted survivor-centered case management when investigating reports of abuse,” it said.

Under previous FIFA leadership in 2014, Karim traveled to Switzerland to collect the FIFA Fair Play Award on behalf of the Afghan federation at the soccer body’s annual awards ceremony.

The ban stripped Aghazada of his seat on the Asian Football Confederation’s executive committee. He was elected by Asian soccer officials in April 2019 despite a call by former FIFA vice president Prince Ali bin al Hussein of Jordan to bar candidates from Afghanistan during investigations of the scandal. 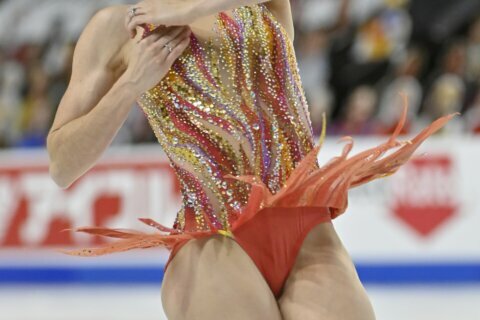