The Arizona Coyotes caught a break when the NHL opted to expand the postseason and return from the pandemic-related shutdown…
Listen now to WTOP News WTOP.com | Alexa | Google Home | WTOP App | 103.5 FM

The Arizona Coyotes caught a break when the NHL opted to expand the postseason and return from the pandemic-related shutdown in a pair of Canadian bubbles.

Arizona was a long shot to make the playoffs when the season was halted in March and the rejiggered format puts them in the postseason for the first time since 2012.

The Coyotes also suffered a setback even before they got to the Edmonton bubble.

John Chayka, considered one of the NHL’s top general mangers, resigned from his position and was called a quitter by the franchise in a sternly worded news release Sunday.

The news broke the day the Coyotes left for Edmonton. So along with trying to prepare for their Stanley Cup qualifier series against Nashville, which opens Sunday, the Coyotes have to add avoiding outside distractions to their list.

“Yeah, that’s been said. A bunch of times. Trust me,” Coyotes coach Rick Tocchet said from Edmonton. “Guys have been great, we’re focused. It’s a focused group and they know how to deal with stuff like that, and we’re ready to go.”

The Coyotes have certainly had their share of off-ice distractions in recent years.

The NHL ran the franchise for four years after former owner Jerry Moyes took the team into bankruptcy in 2009. The Coyotes reached the 2012 Western Conference Finals but the financial constraints of being run by the league took a toll, in part leading to an eight-year playoff drought.

A new ownership group brought new hope in 2013, but turmoil surfaced again in 2015, when the city of Glendale voted to terminate a 15-year, $225 million lease agreement with the Coyotes for Gila River Arena.

Plans for a new shared arena with Arizona State University fell through in 2017 and the franchise’s future in the Phoenix area continued to remain in doubt.

Andrew Barroway gave the Coyotes a bit more financial flexibility when he bought a majority stake in the team in 2017. Current owner Alex Meruelo kept the franchise on an upward climb when he bought the team last year, clearing the way for Arizona to trade for high-scoring forwards Phil Kessel and Taylor Hall.

The Coyotes played well early in the season, but injuries to goalies Darcy Kuemper and Antti Raanta sent them tumbling down the standings to 11th in the Western Conference when the season was halted due to the pandemic.

The new-look postseason put Arizona in the Edmonton bubble and appearing to be in good shape with both goalies, along with Kessel, able to heal.

Chayka, who became the youngest general manager in Northern American sports history at 31 four years ago, reportedly asked Meruelo permission to pursue another professional opportunity. The relationship apparently strained, Chayka was not invited to a dinner with Meruelo and new CEO Xavier Gutierrez to talk with Hall about a contract extension.

Chayka, who signed a contract extension through 2024 earlier this season, tendered his resignation Friday and the team did not hold back in its news release announcing the decision two days later.

“Chayka has chosen to quit on a strong and competitive team, a dedicated staff, and the Arizona Coyotes fans, the greatest fans in the NHL,” the team said.

The inopportune timing puts the Coyotes in the position of having to prepare for what should be a tough postseason series against the Predators while trying to shake off yet another off-ice distraction.

Being in a bubble should help them keep focus. So should their history of playing while uncertainty hangs over the franchise, especially in a playoff format that will be new to everyone.

“You work pretty hard to put yourself in position to play in the playoffs and with everything that went on, we’re in,” Coyotes forward Conor Garland said. “We’ve just got to take advantage of it. Obviously, our first game, everyone’s going to be excited and it’s going to be a different situation than anyone’s ever had, but it’s new to everyone so it’s an even playing field.”

It will be — if the Coyotes can overcome the outside distractions. 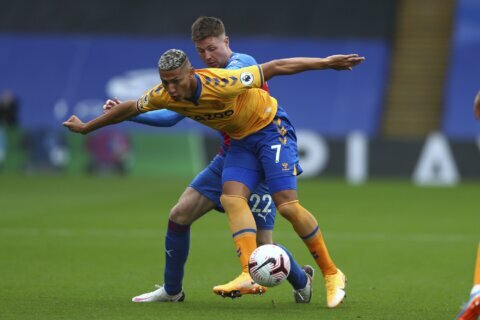