English Premier League players will be able to show solidarity with the George Floyd justice campaign during games without the prospect of facing sanctions.

The Football Association on Tuesday endorsed FIFA’s new stance that “common sense” would be applied when assessing the context of on-field messages on players’ equipment. The laws of the game prohibit “any political, religious or personal slogans, statements or images.”

German soccer authorities said they may sanction players who used goal celebrations to highlight last week’s death in Minneapolis of Floyd, a handcuffed black man who died after a white police officer pressed his knee into his neck for several minutes even after he stopped moving and pleaded for air.

But the English FA, which oversees disciplinary action for Premier League games, has given the green light for players using games to protest against social and racial inequality.

“Where any behaviors or gestures on the pitch that may constitute a breach of the laws of the game have to be assessed, they would be reviewed on a case by case basis with a common sense approach and understanding of their context,” the FA said in a statement when asked about players’ tributes to Floyd. “The power of football can break down barriers across communities and we remain deeply committed to removing all forms of discrimination from across the game we all love.”

The Premier League is due to resume on June 17.

Players from Chelsea, Liverpool and Newcastle have been pictured this week in training taking a knee as part of anti-racism gestures sparked by the death of Floyd.

The England team tweeted a close-up photo of Jordan Henderson and Raheem Sterling high-fiving alongside the message “whatever our nationality. Whatever our race. We’re all on the same team.”

An England men’s game had to be stopped twice last year in Bulgaria after players were subjected to racial abuse.

The FA said it “strongly condemns discrimination of any kind and has endeavored to ensure that football in England is both diverse and inclusive in recent years.”

England winger Jadon Sancho was booked while playing for Borussia Dortmund on Sunday for removing his jersey — a yellow-card offense — only so he could reveal a T-shirt with a “Justice for George Floyd” message.

That led to FIFA telling The Associated Press on Monday that national federations should apply “common sense and have in consideration the context surrounding the events.” 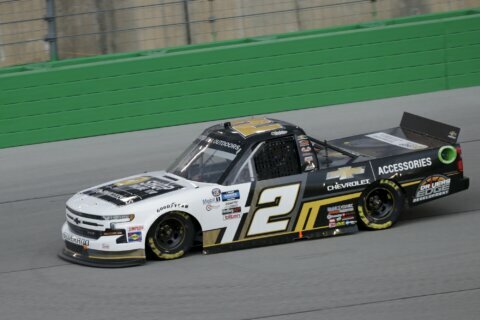 NASCAR Gander Outdoors Truck Buckle Up In Your Truck 225 Results