MADRID (AP) — Players and coaches at Spanish soccer club Eibar are deeply worried about playing again amid the coronavirus pandemic.

A day after the Spanish league said teams can start practising again this week, the Eibar players and coaches — not the actual club — released a statement on Tuesday saying they fear for everyone’s health if the season restarts soon.

“We are afraid of starting an activity in which we won’t be able to comply with the first recommendation of all health experts, physical distancing,” the statement said. “We are concerned that by doing what we love the most we could get infected and infect our family members and friends.”

They added they were concerned about another wave of the coronavirus in Spain in part because of soccer’s return.

“Everyone’s health has to be prioritized,” they said. “It’s time to make that count with actions, not only words. Only with that clear premise it would make sense to return to competition. We ask for guarantees. We demand responsibility.”

Eibar said it would not comment on the statement by its players and coaches. It said the team’s practice schedule for this week remained in place.

Spanish league clubs have been sidelined by the outbreak for nearly two months.

“Of course we understand that people have various emotions, including fear,” the league said in a statement.

“This is an unprecedented time. However, we are taking many precautions for a safe and controlled return of football. Playing football will be safer than, for example, going to the supermarket or pharmacy.”

The league aims to restart in June without spectators. It’s new compulsory protocols say all players, coaches and club employees must be tested for COVID-19 before training resumes, then regularly after that. All clubs’ training facilities must be properly prepared and disinfected before players can start practising individually. Smaller group sessions and full squad sessions will be allowed in the following weeks.

Spain was one of the hardest hit countries by the pandemic but has started loosening some of its restrictions on movement as the number of people infected has waned. The country first went into a state of emergency on March 14.

Eibar was in 16th place, just above the relegation zone, when the league was suspended in March.

Manchester City to get Monday verdict in UEFA ban case 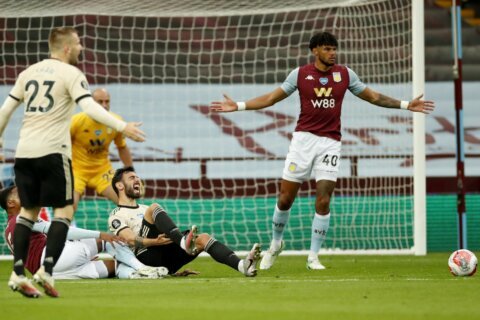 Jimenez, 56, rolls back the years to lead Austrian Open