Blues fall to Vegas in 1st game since Bouwmeester’s collapse

The Blues’ game Tuesday night against Anaheim was postponed after the 36-year-old Bouwmeester collapsed on the team’s bench in the first period. A defibrillator was used on the veteran defenseman before he was taken to a hospital, where he continues to undergo tests.

St. Louis, mired in a 2-6-2 slide, hit the ice for the first time since the incident and got off to a fast start with their teammate on their minds, but couldn’t hold off Vegas.

The Golden Knights tied a franchise record with four power-play goals, including two by Marchessault and one each by Max Pacioretty and Nate Schmidt. Pacioretty also had an even-strength goal, as did Alex Tuch.

Jordan Binnington made 46 saves. Malcolm Subban made 19 saves for Vegas.

Tampa Bay also won its 10th in a row at home.

Vasilevskiy improved to 18-0-2 in his past 20 starts. Pat Maroon and Cedric Paquette also scored for the Lightning, who won despite playing without top two scorers Steven Stamkos and Nikita Kucherov.

Caleb Jones scored for Edmonton, which played its second consecutive game without Connor McDavid, who is out 2-to-3 weeks with a thigh injury. Mike Smith finished with 34 saves for the Oilers, who lost for the fourth time in regulation in the past 16 games.

DENVER (AP) — T.J. Oshie deflected in the winning goal with 2:04 remaining and Washington rallied for a win over Colorado as Alex Ovechkin remained stuck on 698 career goals.

Defenseman Nick Jensen sent a shot into traffic that Oshie got a piece of with his stick, sending it past Philipp Grubauer to help the Capitals break a two-game skid.

Trailing 2-0 after the first, the Capitals climbed back into the game via the power play. Nicklas Backstrom scored on the man advantage in the second and Tom Wilson tied it by redirecting a shot on the power play with 7:12 remaining.

Grubauer stopped 35 shots, including seven from Ovechkin as the 34-year-old tries to become the eighth NHL player to reach the 700-goal mark.

Andre Burakovsky and Mikko Rantanen had goals for Colorado, while Nathan MacKinnon added two assists as the team’s five-game win streak was halted.

Toronto dropped to 2-3-1 over its last six. Auston Matthews scored his 41st goal for the Maple Leafs, and Zach Hyman got his 17th.

Justin Braun had three assists and Matt Niskanen had two as the Flyers improved to 9-3-1 in their past 12 games.

Aleksander Barkov and Jonathan Huberdeau scored for Florida. Sergei Bobrovsky allowed three goals on nine shots and was relieved by Sam Montembeault at the start of the second period. Montembeault made 16 saves. The Panthers dropped to 2-5-1 in their last eight games.

Andy Greene and Jesper Bratt also scored in the four-minute barrage as the Devils posted only their third win (3-20-0) when trailing after two periods.

Goaltender Mackenzie Blackwood, who had shutouts in his last two starts, made 25 saves in winning for the fourth time in five games (4-0-1).

Andreas Athanasiou ended Blackwood’s shutout streak at 171 minutes, 37 seconds with a shot from the right circle at 16:34 of the second period.

Jack Eichel had a goal and and two assists for Buffalo on a night when the Sabres honored members of their 2000 decade teams as part of the franchise’s season-long 50th anniversary celebrations. Evan Rodrigues also scored, and Carter Hutton stopped 28 shots to improve to 4-1 in his past five starts.

The Blue Jackets dropped to 0-1-2 in their past three games in their worst skid since losing four straight from Nov. 30 to Dec. 7.

Columbus squandered a 2-0 lead, but salvaged a point on Markus Nutivaara’s tap-in goal with 1:13 remaining in regulation. Nathan Gerbe and Boone Jenner also scored for the Blue Jackets.

OTTAWA, Ontario (AP) — Marcus Hogberg made 32 saves and Ottawa snapped a six-game winless streak with a victory over Arizona.

Vladislav Namestnikov, Brady Tkachuk and Nick Paul scored for the Senators, who opened a season-high six-game homestand by ending a four-game skid (0-2-2) at home.

Arizona wrapped up its four-game road trip Thursday with a 1-2-1 record.

Rocco Grimaldi had a goal and an assist and Mattias Ekholm also scored for Nashville, which snapped a two-game losing streak.

New York had won two in a row. Thomas Greiss allowed three goals on eight shots before he was replaced by Semyon Varlamov, who made 16 saves.

Making his fourth start in Nashville’s last five games, Saros recorded his second shutout of the season and ninth of his career.

ST. PAUL, Minn. (AP) — Mika Zibanejad scored with 1:06 to play in regulation to forece overtime and scored in the shootout, helping the Rangers erase a two-goal deficit in the third period and beat Minnesota.

Trailing 3-2, New York pulled goalie Alexandar Georgiev with 1:41 remaining for an extra skater and the move paid off when Zibanejad’s 24th goal of the season tied it

After a scoreless overtime, Zibanejad beat Alex Stalock with a backhander in the shootout. Artemi Panarin also scored to clinch New York’s first shootout win of the season.

Panarin added a goal in regulation, as did Pavel Buchnevich. Georgiev stopped 23 shots as the Rangers won their third straight.

Ryan Donato, Jonas Brodin and Jordan Greenway scored for Minnesota, which led 3-1 until midway through the third period.

The Ducks gave up four goals in the first period of their first game since since their game against St. Louis was called off Tuesday night when Blues defenseman Jay Bouwmeester collapsed on the bench during the first period.

Talbot was superb in his first shutout of the season and his first victory since Jan. 11, making 18 saves in the second period alone.

John Gibson stopped 12 shots in Anaheim’s awful first period before Ryan Miller replaced him to start the second. The Ducks’ season-best streak of five straight games with a point ended with just their second regulation loss in eight games. 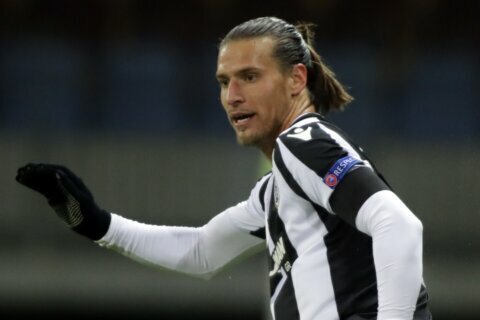 Player sentenced to 3 months at home for flouting curfew