GLENDALE, Ariz. (AP) — Darcy Kuemper stopped 37 shots and slammed an opponent to the ice during a brawl in the second period, and the Arizona Coyotes beat the Calgary Flames 3-0 Saturday.

After Calgary’s Johnny Gaudreau cross-checked Arizona’s Jason Demers late in the second period while Demers was down on the ice, Kuemper put the Flames’ Matthew Tkachuk in a headlock and flipped him off his feet. Tkachuk came up swinging and landed a few blows on Kuemper in a dustup that also included Calgary goaltender David Rittich barreling in from the other side of the rink.

Benn converted a backhand to close out Dallas’ 3-0-1 trip to Canada. It was Benn’s first goal since Oct. 10 and his second on the season.

Jason Dickinson, Miro Heiskanen, Blake Comeau and Tyler Seguin also scored for the Stars (11-8-2), who have won 10 of 12 overall.

The 29-year-old Stamkos is the ninth active player and 98th overall to reach the milestone.

Mathieu Perreault, Nikolaj Ehlers, Jack Roslovic and Kyle Connor scored for Winnipeg, which is on a 6-1-1 roll. The Jets are 9-1-1 in one-goal games.

Andrei Vasilevskiy finished with 23 saves. Victor Hedman got his fourth of the season for Tampa Bay. Anthony Cirelli also scored.

Drew Doughty had a goal and an assist for the Kings, who are on their longest win streak of the season. Nikolai Prokhorkin scored his first career goal, and Jonathan Quick made 28 saves.

Max Pacioretty and Jonathan Marchessault each had a goal and an assist for the Golden Knights, who have lost five straight. William Karlsson also scored, and Malcolm Subban made 21 saves.

Carter tipped Matt Roy’s shot from the blue line to put the Kings ahead 4-3 at 12:42 of the third period. It was the 371st career goal and 713th point for Carter, who also played his 500th game with the Kings.

Kahun matched a career-high with three points. Bryan Rust also had a three-point game, with a short-handed goal and two assists.

Jake Guentzel and Evgeni Malkin each had a goal and an assist, and Jared McCann also scored for the Penguins, who bounced back from Friday’s 2-1 loss at New Jersey. The Penguins have won three of their last seven games, but have points in seven of their last nine games.

Tristan Jarry made 32 saves for Pittsburgh. Jarry has allowed two or fewer goals in four of five outings.

Jason Spezza scored his second for Toronto. The Maple Leafs lost their fifth straight, their longest skid of the season.

Kasimir Kaskisuo stopped 31 shots for Toronto in his NHL debut.

Beauvillier and Mathew Barzal combined to erase a 3-0 deficit in the final 13 minutes of regulation, and Jordan Eberle and Barzal scored in the shootout.

The Islanders are on a 13-0-1 roll that has vaulted them into second place in the Metropolitan Division behind Washington. It’s New York’s longest stretch without a regulation loss since a 15-game run in 1982.

Sean Couturier and Ivan Provorov and Oskar Lindblom scored for the Flyers.

BOSTON (AP) — T.J. Oshie tied it with 59 seconds left in regulation and Jakub Vrana scored the decisive goal in the shootout as Washington beat Boston in a matchup of the Eastern Conference’s top teams.

Charlie Coyle scored to open the shootout for Boston, but Braden Holtby stopped the next four tries. Nicklas Backstrom tied it on Washington’s third try and then, after Jaroslav Halak’s glove save on Alex Ovechkin went to a replay review, Vrana scored the winner.

Holtby stopped 21 shots for Washington, which outshot the Bruins 44-23 in regulation. Travis Boyd scored in regulation for the NHL-best Capitals.

David Pastrnak scored to break a second-period tie, and Coyle also had a goal in regulation for Boston. Halak made 42 saves for Boston, which has beaten the Capitals just once in 15 tries (0-11-4).

Huberdeau increased his career total to 252 assists, taking over the franchise record after coming in tied with Stephen Weiss.

It was the first four-goal performance of Eichel’s five-year NHL career, and the first by a Sabres player since Thomas Vanek in April 2010. It was Eichel’s second hat trick, with the first coming on Dec. 15, 2017, against Carolina.

The Sabres snapped a six-game losing streak and improved to 10-6-3.

Linus Ullmark made 21 saves for Buffalo.

MONTREAL (AP) — Kyle Palmieri scored a power-play goal 1:30 into overtime to complete New Jersey’s comeback from two goals down in a win over Montreal.

Brendan Gallagher, Cale Fleury and Nick Suzuki scored for the Canadiens, who had a three-game win streak snapped. Keith Kinkaid made 39 saves against his former team.

John Gibson made 37 saves as the Ducks snapped a five-game losing streak.

Vince Dunn scored and Jordan Binnington made 21 saves for the Blues, who had their nine-game points streak snapped with their first regulation loss since October 26.

NASHVILLE, Tenn. (AP) — Patrick Kane had a goal and an assist, and Chicago routed Nashville for its third straight victory.

The Blackhawks improved to 5-1-1 in their last seven games. It was a markedly different performance than their first meeting with Nashville this season, a dominant 3-0 win for the Predators on Oct. 29.

Nashville got two goals from defenseman Roman Josi in its fourth consecutive loss. Pekka Rinne allowed four goals in 14 shots before he was replaced by Juuse Saros.

MacKinnon used his speed to go around a Canucks defender and scored on goalie Thatcher Demko’s blocker side.

Andre Burakovsky had a goal and an assist, and Nazem Kadri and Pierre-Edouard Bellemare also scored to help the Avalanche improve to 4-1-0 in their last five games. Rookie defenseman Cale Makar added four assists.

Colorado goalie Antoine Bibeau, who was making his first NHL start since the 2016-17 season when he started two games for Toronto, stopped 28 shots.

Adam Gaudette had two power-play goals, and Alex Edler and Brock Boeser also scored for Vancouver, which fell to 1-4-2 in its last seven games. Josh Leivo had two assists and Demko had 18 saves.

Andreas Athanasiou scored twice and Taro Hirose added one for Detroit, which has dropped 12 of 16.

Martin Jones had 25 saves and stopped all three Red Wings attempts in the shootout.

Jimmy Howard had 16 saves and stopped 2 of 3 shootout attempts. 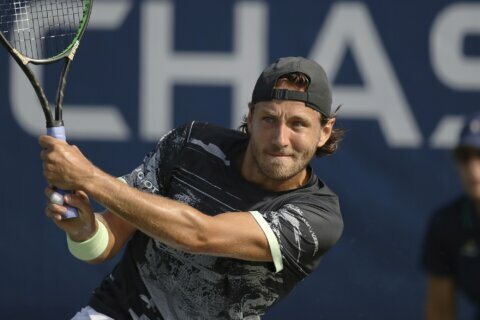 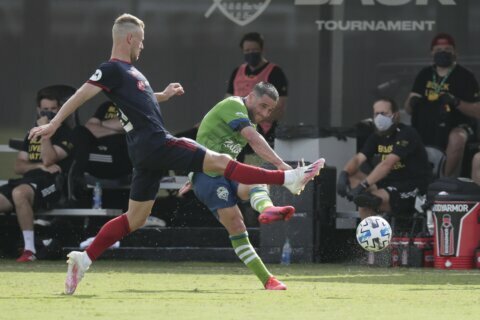