CALGARY, Alberta (AP) — Calgary Flames defenseman TJ Brodie is home from the hospital after falling to the ice and convulsing at practice.

Practice was halted Thursday when Brodie collapsed and was taken to a hospital.

“After a few minutes, TJ was alert, he was responsive,” Treliving said. “A battery of tests took place and then TJ was released. He was at home last night resting with his family.”

The 29-year-old Brodie won’t travel with the Flames for their road game Saturday against the Arizona Coyotes. There was no timetable for his return.

“There’s good news that he’s come through everything so far,” Treliving said. “He’s doing good, is on the mend. He’ll stay under the supervision of our team.”

Brodie is in his ninth season with the Flames. He has eight assists in 21 games this season. 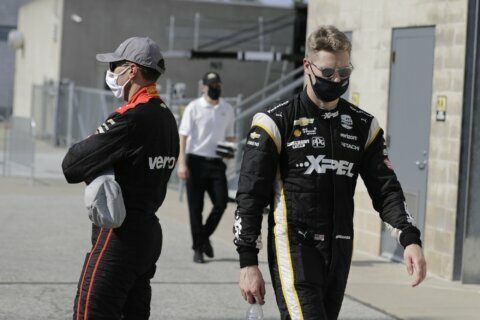 Power’s play puts Penske back in front for Indianapolis GP