Löw stays with Neuer over ter Stegen as Germany’s No. 1

BERLIN (AP) — Germany coach Joachim Löw is staying with Manuel Neuer as first-choice goalkeeper and called up Bayer Leverkusen midfielder Nadiem Amiri for the first time on Friday for games against Argentina and Estonia.

Löw said Barcelona goalkeeper Marc-André ter Stegen will play in the friendly against Argentina in Dortmund on Wednesday, while Neuer will return for the European qualifier in Tallinn, Estonia, four days later.

Ter Stegen has said he was unhappy with his back-up role. He then put in an outstanding performance for Barcelona in a 0-0 draw at Borussia Dortmund in the Champions League.

However, Bayern president Uli Hoeness threatened to withhold Bayern’s players from the national team if Neuer was demoted in favor of ter Stegen.

“We can all be happy that we have two world-class goalkeepers in Manuel Neuer and Marc-André ter Stegen,” Löw said. “I have absolutely no worries over this position, and we also know what (reserve goalkeepers) Kevin Trapp and Bernd Leno can do.

“I have said several times already that Manuel Neuer is our captain and No. 1 with a view to the European Championship, as long as nothing extraordinary happens.”

Amiri has impressed in recent games for Leverkusen. The 22-year-old midfielder scored six goals in 24 appearances for Germany’s under-21 team.

Freiburg forward Luca Waldschmidt and Hertha Berlin defender Niklas Stark were also called up again. Both are still waiting for their Germany debuts.

Germany leads Group C on goal difference ahead of Northern Ireland with 12 points from five games. The Netherlands has nine points from four games, while Estonia is last with zero.

“We’re on course in qualification for the European Championship. Of course we want a clear victory and three more points in Estonia,” Löw said. “The team and players are in a phase of development in which it’s our job to give them room, time, patience and trust. The players have to get experience themselves. That’s why games against strong opponents like Argentina are helpful, where the focus isn’t only on the result.” 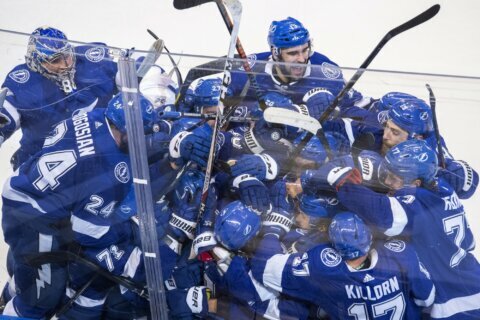