DEL MAR, Calif. (AP) — With his top two horses elsewhere, John Sadler took a chance with a couple others in his barn.

The 4-year-old colt took command turning into the stretch and won the $1 million Pacific Classic by 5 1/4 lengths at Del Mar on Saturday, making Sadler the first trainer to win the Grade 1 race in consecutive years with different horses.

“The second time is just as sweet,” Sadler said.

In 2018, Accelerate ended Sadler’s 0-for-11 skid with a record 12 1/2-length victory in the West’s biggest race of the summer. Owner-brothers Kosta and Pete Hronis joined Sadler with consecutive victories.

“Winning it back to back is a tribute to John Sadler,” Kosta Hronis said.

“When we entered the backside he really grabbed the bit and I was travelling really well,” Prat said. “Once the leader fell apart he really jumped into the bridle and did everything on his own, so I thought that was the right move.”

“He didn’t try at all,” jockey John Velazquez said. “No effort. I don’t get it.”

Not seeing a dominant horse in the race, Sadler entered Higher Power. The colt responded with the first stakes win of his career.

Sadler didn’t get Higher Power in his barn until spring. The colt was with another trainer for the first six starts of his career and then transferred to a different trainer.

— Acclimate won the $250,000 Del Mar Handicap by a length under Florent Geroux. The 5-year-old brown gelding earned an automatic berth in the BC Turf.

— Fighting Mad cruised to an eight-length victory in the $100,000 Torrey Pines Stakes.

Ridden by Joe Talamo, the 3-year-old filly ran one mile in 1:38.61. Fighting Mad paid $6.60 as the 2-1 favorite trained by Bob Baffert. She’s owned by Gary and Mary West, owners of Maximum Security, disqualified after finishing first in the Kentucky Derby. 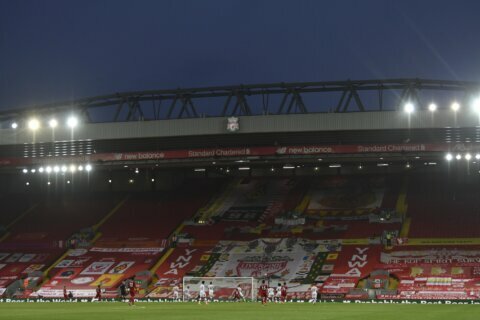 Liverpool to be presented with EPL trophy on the Kop