The teams will meet Saturday at Lamade Stadium, with the victor earning a place in the championship game against either Hawaii or Louisiana.

SOUTH WILLIAMSPORT, Pa. (AP) — Japan is just one win away from its eighth Little League World Series championship game appearance this decade. The Chofu City Little League team is continuing what has been a dominant run in South Williamsport for a country with a population of nearly 127 million.

But this is no David vs. Goliath matchup.

The teams will meet Saturday at Lamade Stadium, with the victor earning a place in the championship game against either Hawaii or Louisiana.

STORY SO FAR: While Japan has outscored its opponents by 30 runs in its 3-0 start to the tournament, Curacao has a run differential of plus-23 in its five games in South Williamsport.

Outside of two solo home runs allowed against South Korea on Wednesday, the Japanese pitching staff has had an unblemished performance. Japan blew out Italy 20-0 in its opening game then followed that with convincing wins over Mexico (5-0) and South Korea (7-2) to reach this point.

Curacao has had to fight back through the losers’ bracket this week to make it to Saturday’s game. The Caribbean regional champions lost to South Korea 4-0 on Sunday, but got redemption on Thursday with a 5-3 win that included a first inning grand slam by Clay Winklaar.

WHO TO WATCH: Japan will have every member of its talented pitching staff available to throw in Saturday’s game, but it might be the only player not to start a game who has stood out the most. Yuto Misaki has made a relief appearance in all three of Japan’s games and hasn’t allowed a run in 5 ? innings, while striking out nine batters.

Curacao’s Curley Martha has been a force at the plate all tournament. He’s 8-for-13 with a pair of home runs and six RBIs. His solo home run helped provide an insurance run in the win over South Korea on Thursday and he’s driven in a run in all but one of Curacao’s games so far.

DID YOU KNOW: Jurdrick Profar, the youngest brother of Oakland Athletics infielder Jurickson Profar, is the third Profar brother to play in the Little League World Series and has been a key contributor to the Curacao team. When Jurdrick takes the field Saturday, all three of the Profar brothers will have made it as far as the international championship.

Jurickson helped lead Curacao to its only Little League title in 2004, while Juremi was a part of the team that lost to Japan in the international championship in 2007.

Tyler King is a journalism student at Penn State University. 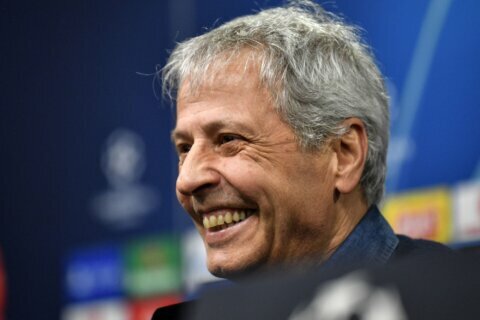 Neymar to return for PSG against Dortmund, says coach