Joseph White, known for finding unique ways to write about sports and other topics during an award-winning career at The Associated Press, has died at age 56.

STAUNTON, Va. (AP) — Joseph White, known for finding unique ways to write about sports and other topics during an award-winning career at The Associated Press, has died at age 56.

White died Saturday, according to Jonathan Hines of the Coffman Funeral Home in Staunton, Virginia, where White was enjoying a second career as the owner of a grocery store and restaurant. Hines said the cause of death is unclear.

White’s brother, Allan Moye, said his brother was found unresponsive on the floor of his home by roommates.

White had recently cut short a hike of the Appalachian Trail after breaking his wrist.

He won Sports Writer of the Year honors in 2005 at the AP while based in Washington, where he covered the NFL’s Redskins and broke news such as the hiring of Jim Zorn as the team’s head coach. His beats also included the NBA’s Wizards, other professional and college teams. White also was a member of AP’s Olympics coverage.

Before going to Washington, White worked for the AP in London.

He took a sabbatical from the company in 2015 and moved to Staunton, in the Shenandoah Valley. White bought Cranberry’s Grocery & Eatery, a natural foods store and cafe, and used events such as scavenger hunts and trivia nights to ingrain himself and the business in the community. He did not return to journalism.

“People in this town really embraced his quirkiness,” Moye said. “He loved to include people in activities and he would create those activities. … Joe never considered himself as alone. He was a big Charlie Brown and Peanuts fan. In fact, he was kind of like a Charlie Brown character.”

White’s first love was radio, and his transition to writing was unexpected, Moye said.

“I was hired first … to work for AP Radio in London,” White said when sharing the news of his sabbatical with his AP colleagues. “Such warm memories return as I make yet another transition.” He added that during his sabbatical, “I’ll be leading hikes and crafting the perfect smoothie.”

White loved journalism. He recently stopped by the Redskins training camp to visit with former colleagues.

“He was serious until you talked about hiking and nature and things like that,” said Redskins President Bruce Allen, who added that the two once dined together after White had written something Allen didn’t agree with. “He wanted to get it right. … He wanted it right. It’s not just his journalism. I think it was in Joseph.”

White was known among fellow reporters, along with people he covered, for his genial demeanor and interest in a wide range of subjects. White brought home-baked cookies to media rooms. He toted a telescope in his car and would encourage others to take a gander. He loved musical theater and boasted a hearty baritone.

And he was a storyteller, on a professional and personal level. One of his favorite assignments was covering the national Spelling Bee.

“Joseph White was a terrific sports writer, but he was never single-minded about sports,” said Michael Giarrusso, AP’s global sports editor. “When I think about him as a colleague, I remember most his deep curiosity about the world and his ability to see stories that went well beyond sports. It’s what made him such a terrific reporter and observer, and it was one of the reasons he was able to transition so easily into a second career.

Former AP Sports Editor Terry Taylor said she hated to see White leave the AP, “but something else was calling Joseph and he found it at Cranberry’s.”

She also recalled his “quirky side that not only endeared him to his colleagues but made the lifestyle switch seem very much in character. Example: Joseph would report for duty at the Olympics dressed for a trail hike — thick-soled boots, shorts, wide-brimmed hat and a giant bag of granola, which he happily shared with his colleagues.”

Steve Wilson brought White into the AP sports fold in London, where he was already working as a freelancer for AP radio. He recalled a time when White had every reason to beg off for the day.

Invited to take part in a swimming relay race involving media and Russian organizers in the 1994 Goodwill Games in St. Petersburg, Russia, White struggled in the pool and received medical treatment on site. Wilson encouraged him to take the day to get some rest, but White would have none of it.

“He said, ‘No, I’ll cover the figure skating as planned,'” Wilson said. “Sure enough he was back covering the skating as if nothing had happened. A real trooper.”

White is survived by three siblings and his son, Harry. 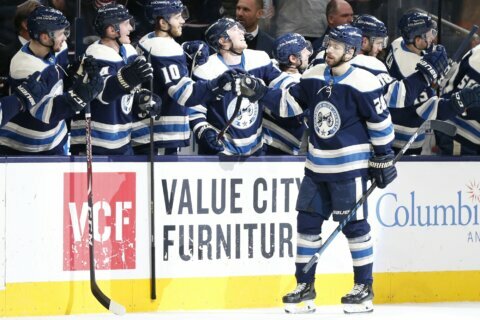