League of her own: woman in Puerto Rico baseball tournament 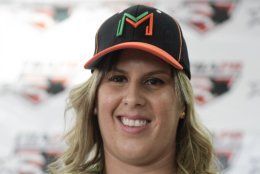 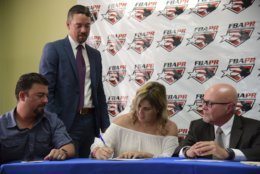 SAN JUAN, Puerto Rico (AP) — A woman in Puerto Rico is set for the first time to play in an otherwise all-male baseball tournament organized by a popular semi-pro league.

Diamilette Quiles is to take over at first base in the fifth inning for the Mountaineers of Utuado.

The 33-year-old woman joined the team Thursday just days before the last games of the season in the Superior Double A League, which has 42 teams around the island.

The Mountaineers play a key game Sunday, and Quiles is expected to make her debut with jersey No. 53, manager Rafael Juarbe said.

The team has won four national championships and is in second place in a five-team division in Puerto Rico’s northern region. The Mountaineers are trying hold home-field advantage in the opening round of the playoffs.

Quiles has come a long way from when she first took to the game. As a young teenager, she would grab a broomstick and hit malt-beverage bottle caps that her brother and father would lob at her.

She quickly advanced through the ranks of softball, playing girls ages 17 and 18 when she was just 13 and a starting player. She joined the island’s female national baseball team, and two World Cups later, someone told Juarbe about her talent.

“We’re betting on Diamilette,” he said of his decision to put her in Sunday’s crucial game.

Quiles has 11 hits in 18 at-bats for a .611 average on Puerto Rico’s national team this season.

She is only one of a handful of women signed by all-male baseball leagues around the world, said Kat Williams, a history professor at Marshall University and president of the International Women’s Baseball Center.

“This is huge,” Williams said. “Until we’re no longer having this conversation about how big of a deal this is … those women are going to be carrying the weight of being the first women to do it.”

Williams said Quiles joins some four to five women in that accomplishment, including two female baseball players who joined the Sonoma Stompers in 2016 and Japanese pitcher Eri Yoshida, who has played in Japan and the U.S.

Another Puerto Rican female athlete made similar history in the 1990s in basketball. Alexandra Osorio joined the now-defunct Puerto Rican Basketball League, but only after a court ruled the then all-male league’s opposition to her playing constituted sexual discrimination.

Williams and Pedro Vargas, executive director of Puerto Rico’s Superior Double A league, warn of a tough road for Quiles.

“For the first time in 80 years, a woman will be participating,” Vargas said, noting many men didn’t make the cut to play in the upcoming tournament. “She’s going to be fighting a lot of male chauvinists out there. We think she can handle it.”