DeRozan, Spurs prepared for pressure of Game 7 in Denver

DENVER (AP) — No stranger to the weight that accompanies Game 7s , DeMar DeRozan offered one overly basic reminder to his team.

“Us versus them,” the San Antonio guard said.

DeRozan’s point : It’s not his team playing a hostile crowd when the Spurs face the Denver Nuggets at Pepsi Center in the first-round series finale Saturday.

Still, the second-seeded Nuggets went a league-best 34-7 at home in the regular season behind all that noise.

“Go out there and play free, play smart,” said DeRozan, whose team forced a winner-moves-on scenario with a 120-103 victory Thursday in San Antonio. “We can’t get caught up in the crowd.”

The Spurs are packing enough outfits for a week’s worth of travel — just in case. Should they win, it’s off to Portland to start the Western Conference semifinals. Should they lose, the offseason begins.

That’s the sort of swagger the Spurs bring to the court. DeRozan believes that experience will play a role against a youthful Nuggets team that is in the postseason for the first time since 2013. With an average age of 24.9, the Nuggets have the youngest squad in the West bracket. The Spurs check in at 27.2.

And while Denver has proven a difficult place to play, the Spurs won in the Mile High City during Game 1 and had a 19-point lead in Game 2 before Jamal Murray rescued the Nuggets.

“It’s literally win or go home. Simple as that,” said DeRozan, who played in two series that went to seven games in 2016 when he was with Toronto. “Once you understand the meaning of that going into the game, you understand that every single second on the court matters.

“The guys that have been in a Game 7 understand what it’s like.”

Like Denver forward Paul Millsap , who last played in a Game 7 during the 2014 playoffs while with Atlanta. The Hawks lost the first-round series to Indiana.

Nuggets big man Nikola Jokic is coming off a monster game in which he had 43 points, 12 rebounds and nine assists. He is averaging nearly a triple-double for the series.

As for what he expects Saturday, he is not really sure.

“It’s my first Game 7,” Jokic said. “It’s probably going to be even tougher than this one.”

San Antonio coach Gregg Popovich facing Denver’s Michael Malone is another intriguing element in this game. Malone referred to his coaching counterpart as Bobby Fischer — the late chess prodigy — as they tried to outmaneuver each other. This is Malone’s first playoff series as a head coach. In contrast, Popovich has been to the postseason 22 straight seasons, with five titles.

For his part, Millsap will try to keep his young teammates from feeling too many nerves.

“All the pressure is on them,” Millsap said. “This is why we fought so hard for home-court advantage. No pressure on us.”

Here’s a look at Saturday’s games:

NEED TO KNOW: The 76ers and Raptors met in the second round of the 2001 playoffs, with Philadelphia winning in seven games. … Toronto is 2-14 overall in Game 1 of a playoff series. …Toronto is 21-3 against Philly since the start of the 2013-14 season.

INJURY WATCH: Philly forward Mike Scott’s status for Game 1 is still to be determined because of a bruised heel.

PRESSURE IS ON: The Raptors. Kawhi Leonard’s teams are 13-0 when he plays against Philadelphia. He was 3-0 against the 76ers this season and averaged 30.3 points.

INJURY WATCH: Murray took a knee from Jakob Poeltl to the left thigh on a screen in Game 6.

KEEP AN EYE ON: Gay. The veteran forward had his best performance of the series in Game 6 with 19 points. “I’ve been a scorer my whole career, man. I’m going to continue to shoot,” Gay said. “It’s been a gift and a curse for me.”

PRESSURE IS ON: The Nuggets. At home, Game 7. “With the season on the line, we’ve got to do whatever it takes to get a win and advance,” Will Barton said. 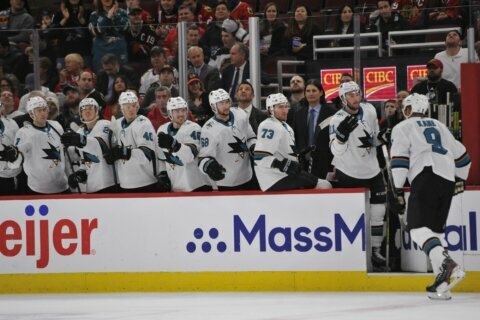 Sharks have plenty of time to stew over down season 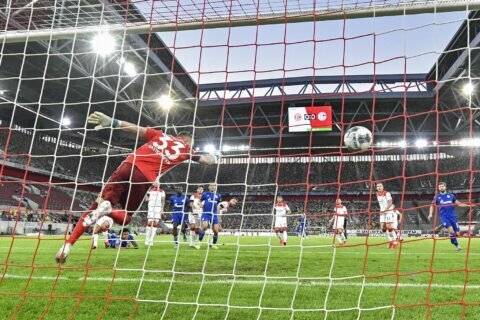