The name of a newly identified variant of the coronavirus has had some social media users scratching their heads about…
Listen now to WTOP News WTOP.com | Alexa | Google Home | WTOP App | 103.5 FM

The name of a newly identified variant of the coronavirus has had some social media users scratching their heads about the World Health Organization’s system for labeling certain versions of the virus.

The WHO chose on Friday to dub the variant, first reported to the agency by scientists in South Africa, “omicron” — continuing its use of the Greek alphabet for naming notable variants of the virus.

Social media users correctly noted, however, that the organization skipped two letters in doing so, leading to questions about the move.

Here’s what we know about how omicron ended up with its name.

CLAIM: The World Health Organization has labeled the new strain the “omicron” variant, skipping over “nu” and “xi” without explanation.

THE FACTS: The WHO on Friday gave the name “omicron” to a new variant of the coronavirus that causes COVID-19. The agency also deemed it a “ variant of concern.”

Omicron was first reported to the U.N. health agency by scientists in South Africa and has been identified in several other countries as well, The Associated Press has reported.

The WHO has followed the Greek alphabet when labeling certain variants of the virus, SARS-CoV-2, since May. It said the system allows for variants to be referred to in a simpler way than by their scientific names, and that it helps prevent people from referring to variants by the location where they were detected and creating stigma.

Many people had expected the agency to label the latest variant nu, which comes after mu, a variant designated on Aug. 30.

Instead, the WHO skipped over nu as well as xi, the next Greek letter in line — a move that many users on social media pointed out, while some questioned whether it was to avoid offending Chinese leader Xi Jinping.

In a statement provided to the AP, the WHO said it skipped nu for clarity and xi to avoid causing offense generally.

“‘Nu’ is too easily confounded with ‘new,’ and ‘Xi’ was not used because it is a common last name,” the WHO said, adding that the agency’s “best practices for naming disease suggest avoiding ‘causing offence to any cultural, social, national, regional, professional or ethnic groups.’”

Those best practices were outlined in a May 2015 document issued by the agency. The organization said at the time that it wanted to “minimize unnecessary negative effects on nations, economies and people” when naming infectious diseases.

This is the first time the organization has skipped letters since it began using the Greek alphabet for coronavirus variants; it has previously used the alphabet to label 12 others. Alpha, beta, gamma and delta are all currently “variants of concern” like omicron. Lambda and mu are given the less serious “variant of interest” designation. Six other letters were assigned to former variants of interest.

The omicron variant appears to have a high number of mutations in the coronavirus’ spike protein, which could affect how easily it spreads to people. The WHO said Friday that preliminary evidence “suggests an increased risk of reinfection” compared to other variants of concern.

But scientists are still in the process of researching exactly what the genetic changes mean, to know if the variant is more transmissible or dangerous. So far, there is no indication the variant causes more severe disease. 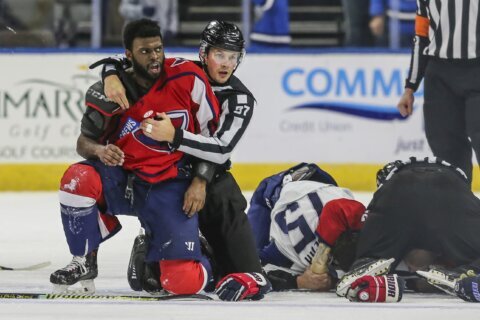