WASHINGTON (AP) — The latest news from a House committee questioning the CEOs of Facebook, Google and Twitter. All times local.

Rep. Steve Scalise, a Louisiana Republican, raised the long-running conservative talking point that Twitter, Facebook and Google are biased against conservative viewpoints and censor material based on political or religious viewpoints. Experts say there’s no widespread evidence that this is true.

Scalise highlighted Twitter’s blocking of a New York Post article on Hunter Biden, which CEO Jack Dorsey said was a mistake that the company corrected within 24 hours. Dorsey added that the content of the article wasn’t the issue, but an imperfect application of the platform’s “hacked materials” policy.

“We make mistakes and our goal to correct them as quickly as possible and in that case we did,” Dorsey said. Scalise asked if anyone in Twitter’s “censoring department” was held accountable.

“Well, we don’t have a censoring department,” Dorsey replied.

In a February report, New York University’s Stern Center for Business and Human Rights called the accusations political disinformation spread by Republicans. The report recommended that social media sites give clear reasoning when they take action against material on their platforms.

Thursday’s hearing is the second time in five months that Congress has called on the CEOs of Facebook, Google and Twitter to testify about content moderation, misinformation, extremism and the liability shield known as Section 230, which protects tech companies from legal responsibility for what users post on their platforms.

These hearings tend to be highly partisan, long and often focus largely on optics rather than substantial policy. Experts, including former Facebook Chief Security Officer Alex Stamos, have suggested that if Congress wanted to get more “useful hearings,” they should call executives at the companies who have a direct hand in content-moderation decisions.

“Instead we get hours of trying to score imaginary C-Span points by tripping up a CEO on decisions made three levels down,” Stamos said on Twitter Tuesday.

Committee chair Frank Pallone, D-N.J., asked the CEOS of all three platforms to answer, in “yes or no” fashion, whether their platforms bear some responsibility for disseminating misinformation related to the election and the “stop the steal movement that led to the attack on the Capitol.”

Facebook CEO Mark Zuckerberg began saying, “Our responsibility is to build systems…,” but Pallone cut him off and asked again for a yes-or-no answer, which Zuckerberg didn’t have.

Alphabet CEO Sundar Pichai said, “We always feel some sense of responsibility,” but also didn’t have a yes-or-no answer.

Twitter’s Jack Dorsey may have scored a point with his answer: “Yes, but you also have to take into consideration a broader ecosystem, it’s not just the technology platforms we use.”

Facebook CEO Mark Zuckerberg, Twitter CEO Jack Dorsey and Sundar Pichai, CEO of YouTube parent Google, are facing questioning at a hearing by the House Energy and Commerce Committee. They have previously pledged strong steps to stanch disinformation, and Facebook and Twitter kicked former President Donald Trump off their platforms following the Jan. 6 deadly insurrection at the U.S. Capitol.

Committee chair Frank Pallone, D-N.J., said, “The time for self-regulation is over. It’s time we legislate to hold you accountable.”

Referencing the Jan. 6 riot, Rep. Mike Doyle, D-Pa., said the attack “started and was nourished on your platforms.” 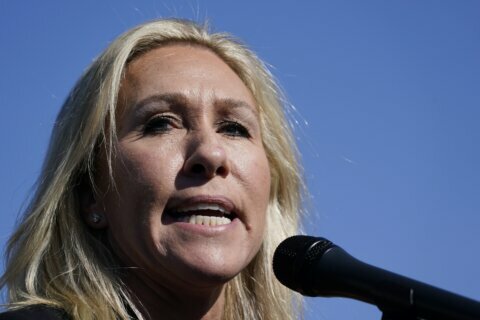