FAYETTEVILLE, N.C. (AP) — The Latest on the special election for a North Carolina congressional seat (all times local): 12:50…

FAYETTEVILLE, N.C. (AP) — The Latest on the special election for a North Carolina congressional seat (all times local):

Conservative Republican Dan Bishop has won a special election for an open House seat in North Carolina, averting a demoralizing Democratic capture of a district the GOP has held for nearly six decades.

Bishop is a state senator best known for a North Carolina law dictating which public bathrooms transgender people can use. He tied himself tightly to Trump, who staged an election-eve rally for him, and Tuesday’s voting seemed no less than a referendum on the president.

Trump quickly took credit for the triumph, proclaiming a “BIG NIGHT FOR THE REPUBLICAN PARTY” on Twitter.

Democrat Dan McCready says he called his Republican rival Dan Bishop to concede and to congratulate him on his victory in North Carolina’s congressional race.

McCready is a former Marine who ran last year for the same 9th Congressional District seat. He narrowly trailed his 2018 Republican opponent, Mark Harris, but the election results were invalidated after evidence of election fraud surfaced. A political consultant for Harris was accused of ballot tampering, and Harris opted not to run again.

McCready said Tuesday that North Carolina voters “faced down the full force of election fraud and voter suppression.” He says, “When the people in power sought to silence the voices of the voters, stole their ballots, forged signatures from them, filled in vote choices for them . we fought back and we won.”

President Donald Trump is taking credit for turning around a faltering Republican congressional candidate and hoisting him to victory in a North Carolina special election.

Trump wrote on Twitter late Tuesday that Dan Bishop was down by 17 points three weeks ago, but after the 9th Congressional District candidate asked Trump for help, “we changed his strategy together.”

No public polling showed Bishop trailing Democrat Dan McCready by such a large margin. Bishop campaign consultant Jim Blaine said at one point the Republican trailed by about 14 percentage points.

Other private polls and campaign consultants described the race as very close. Bishop won by about 2 percentage points with nearly all precincts reporting.

The race was seen as a measure of popularity for Trump, who campaigned for Bishop on Monday in Fayetteville.

A Republican who aligned himself closely with President Donald Trump has won a do-over North Carolina congressional election forced after findings of ballot fraud last year.

Dan Bishop beat Democrat Dan McCready and two other candidates Tuesday in the 9th Congressional District, which has been held by Republicans since 1963.

The race was seen as a measure of popularity for Trump, who campaigned for Bishop on Monday in Fayetteville.

The 55-year-old Bishop is a state senator best known for sponsoring a 2016 state law that blocked local anti-discrimination rules protecting LGBT residents. The law was repealed after it prompted a national outcry and boycotts that The Associated Press estimated cost North Carolina $3.7 billion.

Bishop didn’t run in last year’s election, which was scrapped after allegations of ballot tampering by a Republican political consultant.

A newly elected Republican congressman in North Carolina says President Donald Trump called to congratulate him on his victory.

Republican Greg Murphy won by a comfortable margin Tuesday in the coastal 3rd Congressional District over Democrat Allen Thomas, a former mayor of Greenville. Murphy will succeed the late Rep. Walter Jones Jr., whose death in February led to the special election.

Murphy said Trump called him Tuesday to say he “loves eastern North Carolina and looks forward to us working together to help the region.”

That victory was expected, and all eyes were on another House race in the state that could provide clues about Trump’s reelection prospects and Republican chances of retaking the House in 2020.

Republican Dan Bishop and Democrat Dan McCready are facing off in the 9th Congressional District.

Murphy is a state House member who survived a 17-candidate Republican primary in April and a July runoff. Jones died in February after 24 years in Congress.

The GOP-leaning district extends from the Virginia border and Outer Banks to the Marine Corps’ Camp Lejeune, and inland to Greenville. President Donald Trump won the district vote comfortably in 2016, and Murphy said at a Trump rally that he would have the “president’s back” if elected.

Thomas is a former Greenville mayor who questioned Murphy’s “blind loyalty” to Trump.

North Carolina election officials are delaying the release of results in two congressional districts by 25 minutes.

The state elections board voted Tuesday evening to extend voting by 25 minutes in a single Mecklenburg County precinct where a gas leak disrupted balloting. The decision just minutes before voting ended at 7:30 p.m. forced the delay in releasing initial results in the special elections in the 9th and 3rd congressional districts.

The precinct is in a Republican-leaning suburb of Charlotte in the 9th Congressional District.

Republican Dan Bishop is seeking to extend the GOP’s 56-year hold on the district. He’s running against Democrat Dan McCready and two other candidates.

Polls have closed in North Carolina where voters are filling two vacant congressional seats — one because of an absentee-ballot scandal and the other because a U.S. House member died in office.

Voters in roughly one-quarter of the state’s counties had the chance to cast ballots Tuesday for the 3rd or 9th congressional districts. Many already voted early in-person or by mail.

Millions of campaign dollars have been spent in the south-central 9th district race between Republican Dan Bishop and Democrat Dan McCready. The election do-over was ordered after evidence of ballot fraud last fall that appeared to benefit McCready’s then-GOP opponent.

In the coastal 3rd District, Democrat Allen Thomas and Republican Greg Murphy are top competitors in the race to succeed the late Rep. Walter Jones Jr.

North Carolina election officials are not acting on a request by the state Republican Party to extend hours at a single precinct in the special election for the country’s last undecided congressional seat.

The Republican Party on Tuesday asked that the voting site stay open an extra hour and 45 minutes because they said some 9th Congressional District voters were showing up at the old voting location in Union County, a Republican-heavy area east of Charlotte.

The State Board of Elections met and discussed the GOP request, but took no action.

Union County is seen as critical in the election prospects of Republican Dan Bishop, who is seeking to extend the GOP’s 56-year hold on North Carolina’s 9th Congressional District. He’s running against Democrat Dan McCready and two other candidates.

One voter says he’s fed up with the Republican Party and frightened by President Donald Trump. Another voter says she doesn’t want to see the country become a socialist nation.

Those are just two of the diverging viewpoints at the polls in North Carolina on Tuesday for a special congressional election.

Bishop is in a close battle with Democrat Dan McCready for a vacant seat in the 9th District.

Another Mint Hill retiree, Bob Southern, said he voted for McCready because he’s fed up with the Republican Party’s agenda and President Trump.

The election’s results could foreshadow the 2020 presidential race.

North Carolina Republicans claim election officials in one county provided the wrong address for a voting precinct ahead of a hotly contested special congressional election.

But state election officials say voters were notified of the address change weeks ago.

Polls opened Tuesday for the special election in the Ninth Congressional District. Democrat Dan McCready is in a tossup battle against conservative state Sen. Dan Bishop for a vacant seat.

North Carolina GOP Executive Director Jonathan Sink said in a statement that the Union County Board of Elections failed to update a precinct address in its polling district list and on its website for “at least six weeks.”

But state election officials said in a statement that the county mailed notices of the change to all registered voters on July 29.

Democratic presidential contenders are expressing support for a North Carolina congressional candidate in a hotly contested special election that could serve as a bellwether for 2020.

McCready is a former Marine with a Harvard business degree. He’s is in a tossup battle against conservative state Sen. Dan Bishop for a vacant seat in North Carolina’s 9th Congressional District.

Polls opened Tuesday morning in the GOP-friendly district in and around Charlotte.

Republicans are hoping an eleventh-hour pep talk from President Donald Trump will help them win Tuesday’s special congressional election in North Carolina. The race could shed light on Republicans’ chances of retaking the U.S. House and Trump’s reelection prospects in 2020.

At a rally in Fayetteville on Monday night, Trump campaigned for conservative state Sen. Dan Bishop. Opposing Bishop is moderate Democrat Dan McCready, a former Marine who narrowly trailed in an election for the seat last year that was invalidated after evidence of election fraud surfaced.

Trump carried the district by 11 points in 2016. Both sides see the race as too close to call.

More than half the district’s votes likely will come from Charlotte’s suburbs. When Democrats retook the House in 2018, many of their pickups were in suburbs. 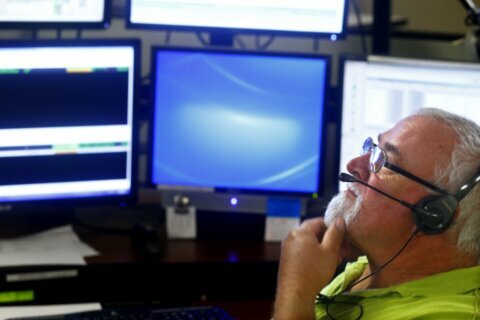