Liverpool completed its 119-day mission to displace Manchester City from atop the English Premier League.

It lasted only a matter of hours.

The status quo was ultimately maintained in what is promising to be another gripping fight for the title between the two giants from northwest England after they beat relegation-threatened opponents on Saturday.

Liverpool was first up, beating third-from-last Watford 2-0 thanks to goals by Diogo Jota and Fabinho to make it 10 straight victories in the league.

That meant City dropped out of first place for the first time since Dec. 4 — but not for long.

Pep Guardiola’s team kicked off barely 30 minutes later at next-to-last Burnley, took the lead after five minutes through Kevin De Bruyne, and coasted to a 2-0 victory. Ilkay Gundogan scored the other goal.

Liverpool and City have games in the Champions League quarterfinals on Tuesday before what could yet be a decisive meeting at City’s Etihad Stadium five days later. One point will separate them heading into what could prove to be a title-decider, with each team having seven more games to play after that.

And that suits Liverpool manager Jurgen Klopp just fine, with his team having been 14 points behind in mid-January — albeit with games in hand.

“I really appreciate the situation we are in,” said Klopp, who has already led Liverpool to the League Cup title and the latter stages of the FA Cup and Champions League. “I told the boys yesterday, if somebody would have told us in the summer that end of March, early April (we would be) in the situation we are in — in all competitions, won one trophy and a full squad available — we all would have taken it, absolutely.

“The only better situation would have been — because in the cup competitions we couldn’t be further — if we are 20 points ahead of City, but that’s not possible actually.”

As for City manager Guardiola, he urged his players to embrace the pressure.

“Every game, if we lose, we are not going to win (the title), simple as that,” Guardiola said.

“Hopefully Liverpool are going to lose against us — apart from that I don’t think they will drop points. We have to feel the pressure, we have to handle it. What we did in the past, when we won 14 games in a row, now we have to win eight, otherwise we will not be champions.”

If third-placed Chelsea had any faint ambitions of catching the top two, they were surely extinguished after conceding four second-half goals in a stunning 4-1 home loss to London rival Brentford.

One of Brentford’s scorers at Stamford Bridge was Christian Eriksen, who netted the second for his first goal in the Premier League since returning from suffering a cardiac arrest at last year’s European Championship. He also scored in back-to-back games for Denmark over the international break.

Chelsea — up for sale and beset by unrelenting takeover talk — might now be looking over its shoulder, with fourth-placed Arsenal five points adrift but with a game in hand. That’s at Crystal Palace on Monday.

Manchester United looks increasingly unlikely to capture a Champions League qualification place from the wreckage of its season.

A 1-1 draw at home to Leicester kept United in sixth place but the gap was four points to Arsenal, which has two games in hand and is one of the form teams in the league.

The league is all that United has to play for after getting eliminated from every cup competition.

James Ward-Prowse has David Beckham in his sights.

The Southampton midfielder earned his team a 1-1 draw at Leeds with a free kick into the top corner. Only Beckham, with 18, has scored more direct free kick goals in Premier League history than Ward-Prowse, who has moved on to 13.

Last-placed Norwich couldn’t take advantage fully of the losses by the other two teams in the relegation zone, Burnley and Watford, but at least ended a run of six straight losses in the league by drawing at Brighton 0-0.

Norwich is seven points from safety with eight games left.

In the other game, Wolverhampton climbed to seventh place and kept up its push for a finish in the European positions by beating Aston Villa 2-1. 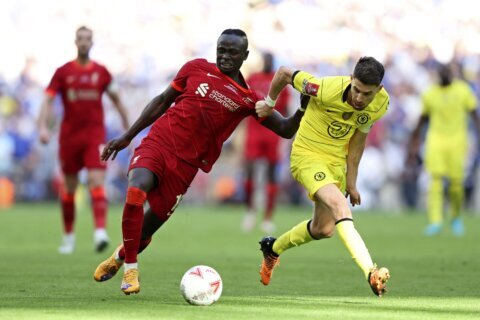 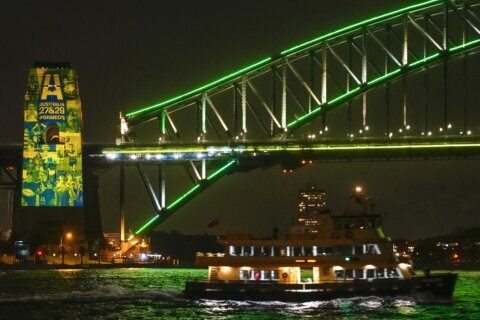