Gregg Berhalter thinks American players will adjust to a freeze with ease.

The U.S. picked Columbus, Ohio, for its World Cup qualifier against El Salvador on Jan. 27 and St. Paul, Minnesota, for its Feb. 2 match against Honduras, games wrapped around a Jan. 30 meeting with Canada in Hamilton, Ontario.

Wanting to minimize travel and draw a pro-U.S. crowd, Berhalter decided to avoid the Eastern seaboard and Florida. He said of Washington, D.C.: “You can’t play there. It would be a home game for El Salvador.”

Berhalter announced his 26-man roster for an exhibition against Bosnia and Herzegovina on Dec. 18 at Carson, California, aimed at keeping out-of-season Major League Soccer players in shape for the qualifiers.

Defender Aaron Long and forward Jordan Morris are back for the first time since major injuries, joined by 12 players who could make international debuts.

Morris, 27, tore his left ACL on Feb. 20 while on loan from Seattle to Swansea, three years after tearing his right ACL. He returned to the field for the Sounders on Nov. 1 and appeared in three club games.

“If we don’t bring him into this camp, he has no chance of playing in qualifiers,” Berhalter said. “Our job now is to work with him in these next four weeks when we’re in camp to get him ready to see if he can make an impact in World Cup qualifiers. We know his talent level. We know what he brings to the team. He gives us a different dimension.”

Long, 29, tore his right Achilles tendon while playing for the New York Red Bulls on May 15. He trained with the U.S. team last month but was not on the roster.

Roma defender Bryan Reynolds, who has played just two minutes in Serie A this season under manager Jose Mourinho, is the only player from a major European club.

Taylor Booth, a 20-year-old forward, is with Bayern Munich II. He has played one match for the senior team, a 12-0 rout of fifth-tier Bremer in the first round of the German Cup on Aug. 25.

Johnny Cardoso is the only other foreign-based player. The 20-year-old midfielder plays for Brazil’s Internacionale, whose season ends Dec. 9.

As of the start of camp Monday, the roster will average 23 years, 110 days, and include 15 players 20 and younger.

Gomez, an 18-year-old eligible to play for the U.S. and Mexico, is transferring next month from second-tier Louisville to Spain’s Real Sociedad.

Orlando forward Daryl Dike was omitted to give him time to recover from a year in which he was loaned to Barnsley, and Atlanta defender Miles Robinson was given rest. Montreal midfielder Djordje Mihailovic was left off to allow him to train with Bologna. 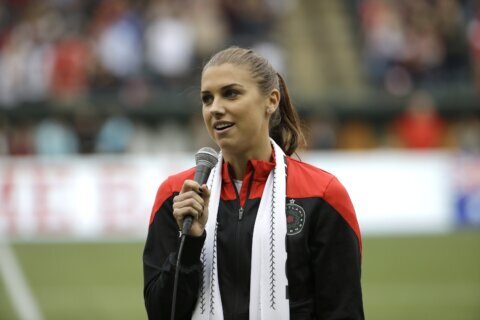