PANAMA CITY, Panama (AP) — Kellyn Acosta walked off with his head bandaged, Matt Turner juggled multiple balls that were tossed in during the final few minutes, when security twice chased fans off the field.

On a humid night in Central America, the United States wilted from the opening whistle and lost to Panama for the first time in a World Cup qualifier, a 1-0 defeat Sunday night

“We’re going to look back at this and be frustrated,” Turner said. “Physically the intensity wasn’t there. They got a huge boost from their home crowd and we didn’t match and exceed that.”

Positioned at the near post, Aníbal Godoy headed Éric Davis’ 54th-minute corner kick past Turner, the ball taking a slight deflection off Gyasi Zardes as it went in toward the far post.

U.S. coach Gregg Berhalter changed seven starters from Thursday’s 2-0 home win over Jamaica, leaving a lineup already missing injured Christian Pulisic, Gio Reyna and Weston McKennie having to go without Brenden Aaronson and Tyler Adams during the first half. In addition, Antonee Robinson remained in the U.S. due to British COVID restrictions that would have impacted him upon his return to the UK.

“In the first half, it was probably a little bit of a lack of energy and competitiveness,” Adams said.

Panama outshot the U.S. 8-5, including a 4-0 advantage in shots on target, and ended a 13-game unbeaten streak for the Americans that included 11 wins. Quite a turnaround for a nation that had one win and 16 defeats in 23 previous games against the U.S., including no wins and six defeats in eight qualifiers.

Berhalter took into account which players he wanted to be fresh for Wednesday night’s qualifier against Costa Rica in Columbus, Ohio, the third match in a seven-day span under a schedule revamped due to the pandemic.

“Now it obviously doesn’t look like the best choice,” Berhalter said. “We know we’re playing in extreme heat, extreme humidity, we’re know traveling for 4 1/2 hours, and we know that we have another game on Wednesday and we wanted to rotate players. And if it didn’t work, then it’s on me, and it’s my responsibility, or our responsility as a staff.”

Adams and Aaronson entered at the start of the second half, Ricardo Pepi in the 67th and DeAndre Yedlin and Cristian Roldan in the 68th.

During the final hectic minutes, the game was interrupted twice when fans ran onto the field. Ball boys at times threw multiple balls onto the field after one went out of bounds.

The match was played on the fourth anniversary of the 2-1 loss at Trinidad that ended a streak of seven World Cup appearances for the U.S., a defeat that enabled Panama to reach the World Cup for the first time.

The U.S. once again went on the road to an antiquated stadium, allowed because FIFA and CONCACAF refuse responsibility for mandating standards anything close to what leading European and American clubs maintain.

Through five of 14 matches, Mexico leads with 11 points following a 3-0 win over visiting Honduras, and the U.S. is second with eight, ahead of Panama on goal difference. Canada has seven after a 0-0 draw at Jamaica, and Costa Rica has six following a 2-1 victory at El Salvador, which has five. Honduras trails with three and Jamaica two.

The top three nations qualify, and the No. 4 team advances to a playoff.

Notes: Mexico got goals from Sebastián Córdova in the 18th, Rogelio Funes Mori in the 76th and Hirving Lozano in the 90th; Maynor Figueroa of Honduras was given a red card in the 50th for a tackle on Raúl Jiménez. … Costa Rica rallied on Bryan Ruiz’s goal in the 52nd and Celso Borges’ penalty kick in the 58th after Jairo Henríquez put the visitors ahead in the 12th. 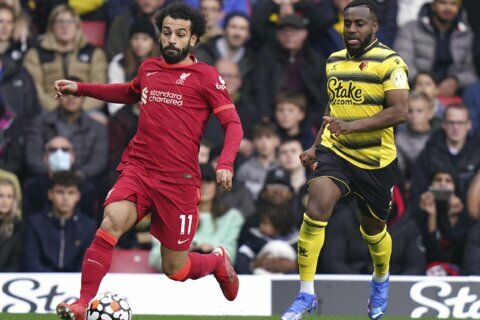