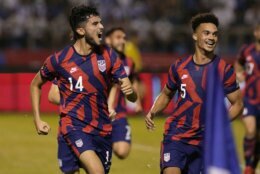 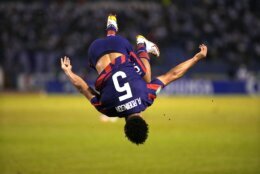 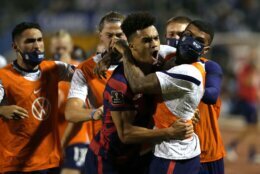 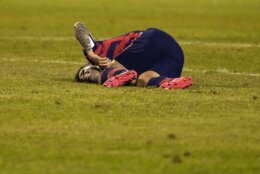 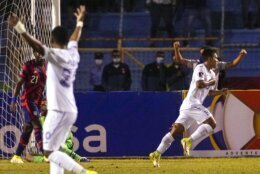 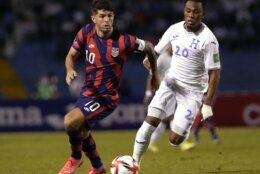 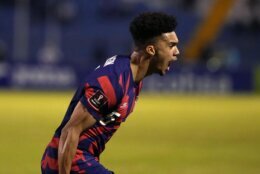 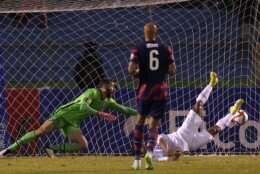 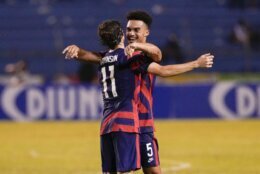 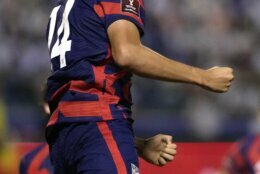 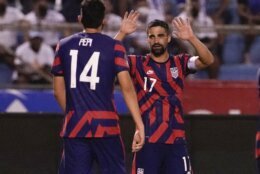 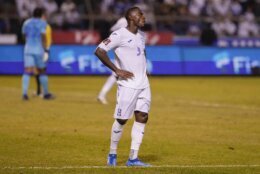 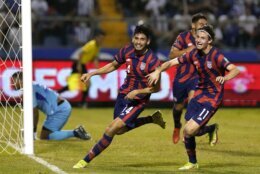 SAN PEDRO SULA, Honduras (AP) — The United States was skidding to another World Cup qualifying failure when Antonee Robinson entered, quickly tied the score and celebrated with a backward somersault.

Ricardo Pepi put the U.S. ahead in the 75th minute, Brenden Aaronson and Sebastian Lletget added late goals and the U.S. rolled past Honduras 4-1 Wednesday night.

“I think it’s really important that we did that just to show everyone that at times it’s going to be a hard qualifying process, but we’re ready for the challenges that’ll come ahead,” Robinson said. “We can respond to anything.”

Pepi had a goal and two assists in his debut, and the Americans exhaled after a tumultuous week of injuries, positive COVID-19 tests and a huge disciplinary issue. They won for just the second time in 41 qualifiers in which they trailed at halftime (six draws).

“Despite all this crap that happened in these last couple days, the guys’ spirits were extremely high,” he said.

Still, Brayan Moya put 63rd-ranked Honduras ahead in the 27th minute, breaking free of George Bello and heading a cross from Diego Rodríguez past goalkeeper Matt Turner after John Brooks lost the ball.

That put the 10th-ranked Americans in a daunting position: They had given up the first goal in 33 previous road World Cup qualifiers, winning two, losing 26 and tying five.

Berhalter told players at halftime they had to change more than formation.

“We need to compete, and that was something I was disappointed with,” he recalled saying. “When they scored, instead of seeing that reaction that we’re used to, I think their heads went down a little bit.”

And to make the challenge greater, Christian Pulisic injured his left ankle early in the second half, tried to continue and fell in a heap during a sprint a few minutes later. He was replaced in the 62nd minute.

“When Christian goes down, it’s always like, mmm, you take like a deep breath because he’s our best player,”Aaronson said.

Pepi, who scored the winning penalty kick in last month’s Major League Soccer All-Star Game against Liga MX, at 18 years, 242 days became the second-youngest American to appear in a qualifier behind Pulisic at 17 years, 193 days in March 2016.

The Dallas forward chose to play for the U.S. over Mexico, the 65th player to appear for the Americans since the October 2017 loss at Trinidad and Tobago ended a streak of seven straight World Cup appearances. He was the 42nd since Berhalter was hired in December 2018.

“I feel like he had confidence in me,” Pepi said, “so I just went out there and do my thing.”

Berhalter made five lineup changes, inserting Pepi, Bello, Mark McKenzie and James Sands for their qualifying debuts and bringing back Josh Sargent, who started the opener. They were part of a lineup that averaged the youngest ever for the U.S. in a qualifier at 23 years, 85 days, one that had Pulisic, Tyler Adams and Kellyn Acosta in a 3-5-2 formation, with Adams playing wide on the right rather than defensive midfield.

“We needed to push up much quicker,” Berhalter said, “give our midfielders smaller space to be able to win balls. We wanted to be more aggressive high pressing them, and we thought that would lead to some turnovers.”

Criticized for waiting too long to insert substitutes on Sunday, Berhalter injected Robinson, Lletget and Aaronson to start the second half for Brooks, Bello and Sargent. The horn-blowing full house of about 31,000 at Estadio Olimpico Metropolitano quickly was silenced.

Robinson tied it in the 48th with his first international goal. Pulisic took a pass from Pepi at midfield, dribbled and dished wide to Lletget, who crossed. Pepi made a backheel drop in the 6-yard box to Robinson, who scored with a right-footed volley from 8 yards.

Pepi put the U.S. ahead in the 75th. Two minutes after replacing Sands, DeAndre Yedlin crossed and Pepi outjumped Marcelo Pereira to loop a header to the left of goalkeeper Luis López.

Pepi burst into the penalty area in the 86th and squared for Aaronson, whose right-footed shot from 12 yards was his fifth international goal and second of qualifying.

“I was so fired up today, I don’t know what kind of took over me, but I was just ready to go, and you could see it with all the subs. It was a spark,” Aaronson said

Luis López got a hand on Pepi’s shot in the third minute of stoppage time. Lletget, following up on the play, banged the ball into the open net for his eighth international goal. The U.S. scored four goals in a qualifier in Central America for the first time.

“We just fought,” Lletget said. “We knew we just had to match their intensity. That was the biggest change in the second half.”

Mexico leads the North and Central American and Caribbean region with seven points, followed by Canada and the U.S. with five points each and identical goals for and against. Panama has five points and trails on goals, while Costa Rica and Honduras have two points apiece and Jamaica none. The top three nations qualify.

“Maybe we thought it was going to be easier than it was going down to El Salvador, Honduras,” Adams said. “These are tough games, man. You see how hostile the crowds are, but the energy is amazing, the atmosphere is amazing. It’s only going to make us better for the future.”

Notes: Pulisic’s ankle will be evaluated by Chelsea. The European-based Americans took a charter flight to London and onto Berlin after the match. … Canada beat visiting El Salvador 3-0 on goals by Atiba Hutchison, Jonathan David and Tajon Buchanan. … Mexico got a 76th-minute goal from Jesús Corona in a 1-1 draw at Panama, which went ahead on Rolando Blackburn’s 28th-minute goal. … Costa Rica was held to a 1-1 draw by visiting Jamaica. Jimmy Marín scored in the third minute for the hosts and Shamar Nicholson tied the score in the 47th.