A dash of Italian panache completed a 4-2 penalty-shootout win over Spain at Wembley Stadium on Tuesday, setting up a title match against either England or Denmark back at the same stadium on Sunday.
Listen now to WTOP News WTOP.com | Alexa | Google Home | WTOP App | 103.5 FM
(1/12) 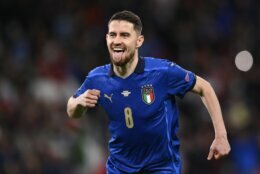 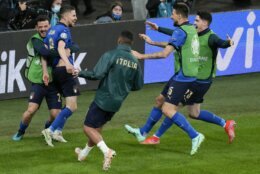 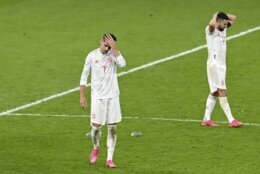 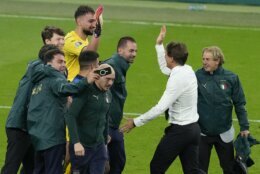 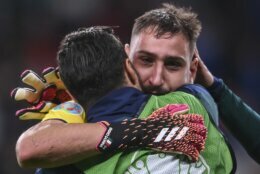 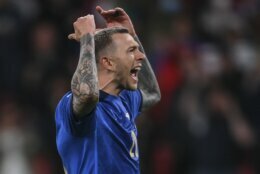 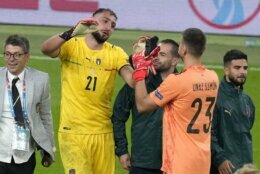 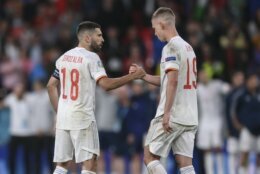 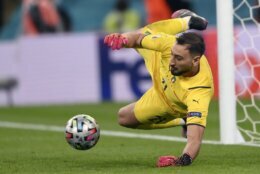 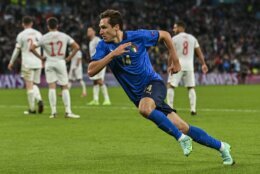 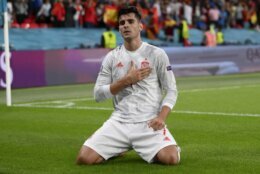 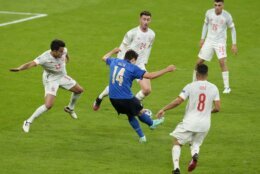 LONDON (AP) — Facing a wall of nervous blue-and-white clad Italy fans behind the goal, Jorginho took his trademark hop and skip before calmly stroking in the winning penalty.

So much for the pressure of a shootout in the European Championship semifinals.

A dash of Italian panache completed a 4-2 penalty-shootout win over Spain at Wembley Stadium on Tuesday, setting up a title match against either England or Denmark back at the same stadium on Sunday.

The match finished 1-1 after extra time and provided Italy with its toughest test of the tournament, with Spain controlling possession for long periods. Federico Chiesa scored for Italy with a curling shot in the 60th minute but substitute Alvaro Morata equalized for Spain in the 80th.

Morata, dropped from the starting lineup for the first time in a tournament during which he has received verbal abuse and even death threats from his own fans, will go down as Spain’s scapegoat once again after having a penalty saved by Gianluigi Donnarumma in the next-to-last kick of the shootout.

As he walked back to the center circle with his head bowed, Jorginho made the opposite journey and didn’t make the same mistake.

The Chelsea midfielder has his own style when it comes to taking penalties and he didn’t abandon it when it mattered most, sparking a throng of celebrations as Italy’s players sprinted from the halfway line.

Jorginho was mobbed. Italy coach Roberto Mancini was hugged by the rest of coaching staff. The players lined up on the edge of the area and ran together, holding hands, toward the fans.

Leonardo Bonucci went further, leaping over the advertising hoardings to get even closer to the crazed supporters whose loud cheering had lifted the team in their most difficult moments.

“We’re delighted we could provide this wonderful entertainment to the Italian people,” Mancini said. “One game to go.”

Riding a national record unbeaten run of 33 games, Italy will play in its fourth European final and look to win the title for a second time, after 1968.

It’s quite the redemption story for a country which failed to qualify for the 2018 World Cup.

“This group is amazing,” Mancini said. “Everyone wants to win, but this group of players wanted to do something special.”

They have had the aura of champions since Day 1 of the tournament and they’ll be sticking around until the last day, too. But it’s at the home of English soccer where the team has had its toughest matches.

Against Austria in the round of 16, the Italians were taken to extra time at Wembley and they had to go the distance, too, against Spain.

Spain’s striker-free formation initially flummoxed the Azzurri, who have become a more progressive team under Mancini but were given a clinic at times in ball possession and movement in midfield.

Experienced center backs Giorgio Chiellini and Bonucci looked uncertain at times, not knowing whether to drop back or follow deep-lying forward Dani Olmo — who started ahead of Morata — into the center of midfield.

Spain’s pressing also drew some rash clearances from the back from Italy. That created the team’s best chance in the first half with Ferran Torres’ shot requiring a low save from Donnarumma.

The Italians had even more problems when Morata came on as a substitute but, by then, Chiesa had put them ahead after latching onto a loose ball, cutting inside and curling a shot into the far corner. It was his second goal at Wembley in this tournament, having scored just as impressively against Austria.

Morata’s movement stretched Italy’s defense to set up chances for Mikel Oyarzabal and Olmo. Then he scored for the third time at Euro 2020.

For a player often accused of wasting chances when he has too much time in front of goal, Morata showed calmness to sidefoot in a left-footed shot after exchanging passes with Olmo at the edge of the area.

Morata grabbed a camera behind the goal and thrust his face into it. But he had nowhere to hide after becoming the second Spain player to miss in the shootout — after Olmo — following 30 minutes of extra time.

“He really has a lot of personality,” Spain coach Luis Enrique said of Morata. “He wanted to take a penalty even though he’s been through some tough times in this competition.”

Italy started the shootout with Manuel Locatelli’s shot saved by Unai Simon, but Andrea Belotti, Bonucci and Federico Bernardeschi all scored before Jorginho.

Spain, a three-time European champion, beat Switzerland in a penalty shootout just to get to Wembley. Having also been taken to extra time by Croatia in the last 16, the Spanish certainly took the long route to the semifinals but their journey ended there.

“Everyone made Italy big favorites,” Spain midfielder Sergio Busquets said, “but we demonstrated we were superior to them.”

Juventus targets capital increase of up to $475 million

Gyasi Zardes lifts US over Qatar 1-0, into Gold Cup final