Waving flags emblazoned with “Champions 55” and setting off flares, Rangers supporters defied the pandemic lockdown to gather in their thousands to celebrate the decade-long title drought ending Sunday.

The Ibrox stadium they have been denied access to for a year was the destination for fans after Celtic drew 0-0 with Dundee United. That sealed the dethroning of Glasgow rival Celtic, ending its nine-year Scottish Premiership title streak.

It is a world record 55th domestic league title for Rangers, though not to the rivals who claim it is the reborn club’s first after being forced to start again in the fourth division after a financial implosion and liquidation in 2012.

“I congratulate @RangersFC on the title win & recognise what a moment this is for fans,” she tweeted. “But gathering in crowds just now risks lives, and could delay exit from lockdown for everyone else. If those gathering care at all about the safety of others & the country, they will go home.”

It was the second successive day the fans flooded to Ibrox, rather than staying at home as required by the law. They gathered as Rangers beat St. Mirren 3-0 on Saturday.

Now Steven Gerrard’s side has an unassailable lead of 20 points with six games remaining.

Celtic has dominated since Rangers was demoted to the lowest professional league in 2012 but has now been prevented from winning the title for an unprecedented 10th straight season, and for a 52nd time overall.

It is the first league title ever won by Gerrard, who spent most of his playing career at Liverpool. Gerrard came agonizingly close in 2014 to finally landing the one club prize that eluded him: The Premier League title. Adding to the anguish, Gerrard’s own slip against Chelsea contributed to a 2-0 loss that ended up costing Liverpool the title as Manchester City emerged victorious.

After seeing out the final two years of his playing career at the Los Angeles Galaxy, the midfielder retired from playing in 2016 and embarked on his coaching career with Liverpool’s youth teams.

Gerrard made the step up to first-team management in 2018 when he was hired by a Rangers side in the doldrums after being thrashed 4-0 by Celtic in a Scottish Cup semifinal. It has taken three years for Gerrard to restore Rangers to its once-customary position as champions of Scotland.

“There’s a great spirit in the group,” Gerrard said. “I think everyone — and me included — has expected at some point, as we got closer, to see some nerves or tension or some inexperience. But this shows the strength of the dressing room.”

No longer is Gerrard just seemingly reliant on striker Alfredo Morelos. Captain James Tavernier, a right back, has scored 17 goals. Goalkeeper Allan McGregor and defender Connor Goldson have been part of the barrier that have seen Rangers concede only nine goals in 32 league games. The team remains in Europa League contention as well.

“There’s a lot of fearless young players and some real calm heads,” Gerrard said. “We’ve got the balance spot on at the moment. That doesn’t mean we’re set. We need to keep moving it forwards and improve things — and we will.” 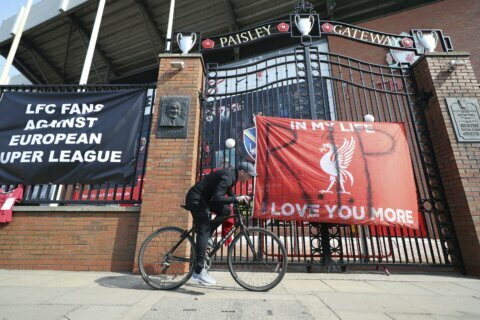