Tuchel on Friday sought to quell speculation about Pulisic’s long-term future at Stamford Bridge. Pulisic’s only start since Tuchel took over late last month was in an FA Cup match last week.

The German manager said it’s a “clear yes” when asked if he wants the 22-year-old Pulisic to stay at Chelsea.

“But it’s not only my point of view, we have to see. But for me, clearly yes,” Tuchel said. “Chelsea bought Christian for a reason — for his quality, for his potential and it’s our job to bring out the best in him.”

Pulisic, who made his Bundesliga debut under Tuchel at Borussia Dortmund, was an unused substitute in the 2-0 win over Newcastle on Monday.

He was withdrawn from training Thursday with calf tightness and is “a big question mark” for the Southampton match, Tuchel said.

“I would not say that it is an injury. In the moment it’s risk management,” Tuchel said, citing Pulisic’s history of injuries including a hamstring pull that kept him sidelined early in the season. “We are not concerned, we are not worried.

There’s no doubt Pulisic has the talent, the manager said.

“He proved in many weeks that he has the level to be a Chelsea regular player, to have a big impact in this club. It’s a challenge now to hold this level … and to keep improving.”

Pulisic has two goals and an assist in 21 appearances this season across all competitions.

“There are absolutely no decisions made for summer,” Tuchel said. “There’s simply no time for that in the moment.”

Fourth-place Chelsea has won four consecutive Premier League games and has a Champions League clash against Atlético Madrid on Tuesday. 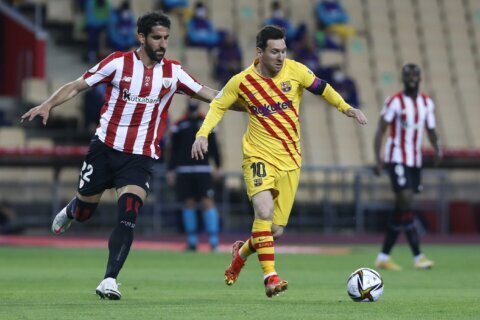