The longest season in the history of England’s top soccer division comes to an end on Sunday.

After nearly 12 months, here’s what is still at stake in the Premier League:

Manchester United, Chelsea and Leicester are fighting for the remaining two Champions League qualification positions behind champion Liverpool and second-place Manchester City, and only one point separates the three teams.

Intriguingly, two of them face off on the final day, with Leicester hosting United at King Power Stadium. United is third on goal difference ahead of Chelsea, with Leicester a point behind.

A draw guarantees United a top-four finish and would also see Leicester qualify if Chelsea, which has a vastly inferior goal difference to its two rivals, loses at home against Wolverhampton Wanderers.

Chelsea is guaranteed a return to the Champions League with a win or a draw.

The teams finishing in fifth and sixth place will qualify for the Europa League. So, too, will the seventh-place team if Chelsea wins the FA Cup against Arsenal.

One of Chelsea, Leicester and United is sure to take one of the spots while the other will go to Wolves or Tottenham.

Wolves, currently in sixth place and a point ahead of seventh-place Tottenham, is guaranteed a second straight season in the Europa League with a win at Chelsea. If Wolves lose, Tottenham can climb to sixth with a draw or win at Crystal Palace.

If Arsenal wins the FA Cup, it will qualify for the Europa League and deny the seventh-place finisher that reward.

Villa is the team outside the bottom three, but only because of its superior goal difference of plus-1 over Watford. Bournemouth is three points back in next-to-last place and has the same goal difference as Watford (minus-27).

All three teams are away, Villa at West Ham, Watford at Arsenal and Bournemouth at Everton. Not only does Bournemouth have to win to stay up to ensure a sixth straight season in the top league, it also needs both Villa and Watford to lose.

Leicester striker Jamie Vardy is on course to win the Golden Boot scoring trophy for the first time.

Vardy leads the league with 23 goals for the season, two clear of Southampton striker Danny Ings and three ahead of Arsenal forward Pierre-Emerick Aubameyang.

A goal further back are Manchester City winger Raheem Sterling and Liverpool forward Mohamed Salah, who is looking to collect the Golden Boot for the third straight season since moving to Anfield.

Salah has four goals to make up on Vardy, though, in Liverpool’s match at Newcastle. Sterling is up against Norwich.

Ings, who plays at home against Sheffield United, looks the likeliest to catch Vardy in what is his most prolific season in the top division.

David Silva will play his final Premier League game for Man City before he leaves the club after 10 years.

It is unlikely to be the last time fans see the man they call “El Mago” in a City jersey, though, with the team still involved in the Champions League.

Adam Lallana is leaving Liverpool after six years so he should get some game time in the champions’ last outing of the season, while this could be the last match for their clubs for Chelsea wingers Willian and Pedro Rodriguez, Tottenham defender Jan Vertonghen and Arsenal midfielder Dani Ceballos. They have contracts only until the end of the extended season. 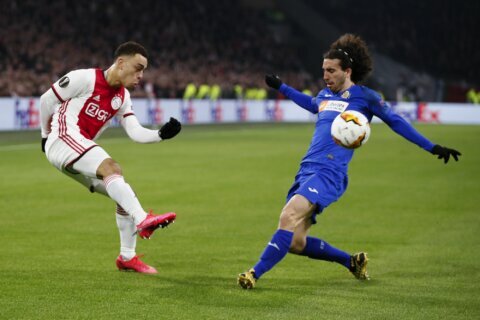