LONDON (AP) — The drive to raise women’s football attendance in England is taking on a more persuasive tone, almost obliging supporters of the men’s game to see the quality on offer.

The Women’s Super League campaign — “ a true fan supports their whole club ” — contributed to record attendances on Sunday as the post-World Cup boom continues in England.

“It’s quite edgy and a little bit sort of punchy,” Kelly Simmons, director of the women’s professional game in England, said at Tottenham which drew a WSL record crowd of 38,262 for the visit of Arsenal.

While hostilities between the north London rivals go back around 130 years in the men’s game, this was their first WSL derby.

“It was incredible to be part of it,” said Arsenal captain Kim Little, who broke the deadlock in the 66th minute before Vivianne Miedema sealed a 2-0 victory to stay third in the 12-team WSL.

Arsenal brought 3,000 fans across the capital to add to the tribalistic atmosphere being encouraged.

“Little things like getting booed when taking a corner was a weirdly nice experience,” Arsenal striker Beth Mead said, “because it’s part and parcel of the game.”

Tottenham’s men reached the Champions League final last year, but the club is only a few months into having a fully professional women’s outfit after gaining promotion.

“It’s momentous for Spurs Women, to see how far we’ve come,” said Karen Hills, joint manager of a Tottenham side sixth in the standings. “The players deserve to be playing in front of these big crowds. Hopefully it won’t just be an occasion, hopefully it will be the norm.”

The crowd surpassed the 31,213 at Manchester City for the visit of Manchester United on the opening weekend of the season in September.

There has been an upward trajectory in attendances since the Women’s World Cup when England reached a second successive semifinal in July.

The increased following has been helped by clubs using their main stadiums, like Tottenham’s slick new 61,000-capacity venue that opened in March.

Anfield was used for the Merseyside derby on Sunday and 23,500 fans saw fresh struggles for two-time WSL champion Liverpool.

While the men’s team is top of the Premier League, their female counterparts are last in the WSL after Lucy Graham’s speculative strike slipped through goalkeeper Anke Preuss’ grasp to give Everton a 1-0 win.

“It’s going to hurt us more as we were the better team today and we gave them a goal with a mistake from our keeper,” Liverpool manager Vicky Jepson said. “It was a goal we chucked in the back of our net. There was no way they were going to score today if we didn’t give them that.

“(Preuss) came to me and put her arms around me and apologized for the mistake.”

League leader Chelsea opened the season by hosting Tottenham in front of around 25,000 at Stamford Bridge but usually plays at a smaller stadium in south London.

For Sunday’s visit of Manchester United to Kingsmeadow, the crowd of 4,790 was a WSL high for a game not played in a large stadium usually used by the men’s team.

It was a contentious victory against the league newcomers.

Chelsea remains a point ahead of Manchester City, which beat West Ham 5-0 in front of 2,145 at a smaller stadium on its Etihad campus. Georgia Stanway scored twice on her 100th City appearance before being sent off.

While England is home to Europe’s only fully professional women’s league, players across the continent are still fighting to earn a living.

Spanish women’s league players went on strike this weekend demanding better wages and worker protections, leading to eight games being postponed. Players are lobbying for better conditions, including protection in the event of pregnancy. 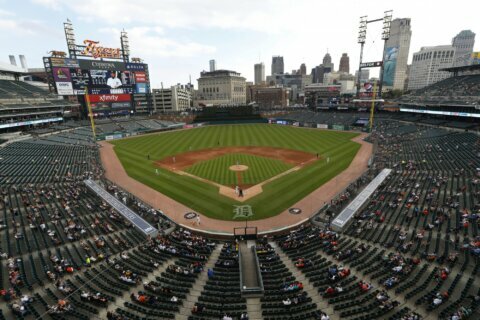 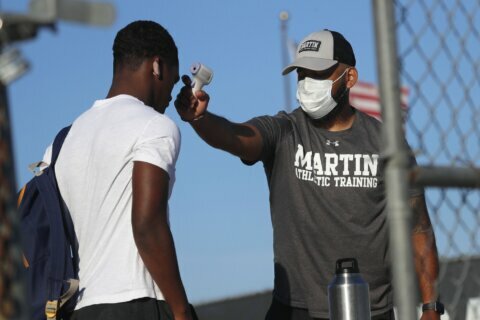