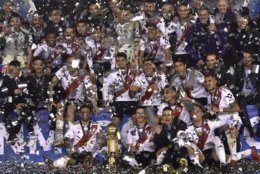 The Recopa is between the champions of the Copa Libertadores and Copa Sudamericana.

The trophy is coach Marcelo Gallardo’s 10th, a record for River. The former Argentina international joined in 2014.

Athletico led 1-0 after the first leg in Curitiba last week, and Nacho Fernandez tied the score on aggregate in the 65th minute.

Just when the 62,000 spectators at Monumental de Nunez Stadium thought the game was going to a penalty shootout, Lucas Pratto scored the second a minute into injury time. Pratto also scored in both legs of the controversial Copa Libertadores final last year.

Bradley to have surgery, likely sidelined about 4 months