14 years later, NATO is set to renew its vow to Ukraine

BUCHAREST (AP) — NATO returns on Tuesday to the scene of one of its most controversial decisions, intent on repeating…
Listen now to WTOP News WTOP.com | Alexa | Google Home | WTOP App | 103.5 FM

BUCHAREST (AP) — NATO returns on Tuesday to the scene of one of its most controversial decisions, intent on repeating its vow that Ukraine — now suffering through the 10th month of a war against Russia — will join the world’s biggest military alliance one day.

NATO foreign ministers will gather for two days at the Palace of the Parliament in the Romanian capital Bucharest. It was there in April 2008 that U.S. President George W. Bush persuaded his allies to open NATO’s door to Ukraine and Georgia, over vehement Russian objections.

“NATO welcomes Ukraine’s and Georgia’s Euro-Atlantic aspirations for membership in NATO. We agreed today that these countries will become members of NATO,” the leaders said in a statement. Russian President Vladimir Putin, who was at the summit, described this as “a direct threat” to Russia’s security.

Some experts describe the decision in Bucharest as a massive error that left Russia feeling cornered by a seemingly ever-expanding NATO. NATO counters that it doesn’t pressgang countries into joining, and that some requested membership to seek protection from Russia — as Finland and Sweden are doing now.

More than 14 years on, NATO will pledge this week to support Ukraine long-term as it defends itself against Russian aerial, missile and ground attacks — many of which have struck power grids and other civilian infrastructure, depriving millions of people of electricity and heating.

In a press conference Monday in Bucharest after a meeting with Romania’s President Klaus Iohannis, NATO Secretary-General Jens Stoltenberg highlighted the importance of investing in defense “as we face our greatest security crisis in a generation.”

“We cannot let Putin win,” he said. “This would show authoritarian leaders around the world that they can achieve their goals by using military force — and make the world a more dangerous place for all of us. It is in our own security interests to support Ukraine.”

Stoltenberg noted Russia’s recent bombardment of Ukraine’s energy infrastructure, saying Putin “is trying to use winter as a weapon of war against Ukraine” and that “we need to be prepared for more attacks.”

North Macedonia and Montenegro have joined the U.S.-led alliance in recent years. With this, Stoltenberg said last week before travelling to Bucharest, “we have demonstrated that NATO’s door is open and that it is for NATO allies and aspirant countries to decide on membership. This is also the message to Ukraine.”

Individual allies are also likely to announce fresh supplies of military equipment for Ukraine — chiefly the air defense systems that Kyiv so desperately seeks to protect its skies. NATO as an organization will not offer such supplies, to avoid being dragged into a wider war with nuclear-armed Russia.

But the ministers, along with their Ukrainian counterpart Dmytro Kuleba, will also look further afield.

“Over the longer term we will help Ukraine transition from Soviet-era equipment to modern NATO standards, doctrine and training,” Stoltenberg said last week. This will not only improve Ukraine’s armed forces and help them to better integrate, it will also meet some of the conditions for membership.

That said, Ukraine will not join NATO anytime soon. With the Crimean Peninsula annexed, and Russian troops and pro-Moscow separatists holding parts of the south and east, it’s not clear what Ukraine’s borders would even look like.

Many of the 30 allies believe the focus now must be uniquely on defeating Russia.

“What we have seen in the last months is that President Putin made a big strategic mistake,” Stoltenberg said. “He underestimated the strength of the Ukrainian people, the Ukrainian armed forces, and the Ukrainian political leadership.”

But even as economic pressure — high electricity and gas prices, plus inflation, all exacerbated by the war — mounts on many allies, Stoltenberg would not press Ukraine to enter into peace talks, and indeed NATO and European diplomats say that Putin does not appear willing to come to the table.

“The war will end at some stage at the negotiating table,” Stoltenberg said Monday. “But the outcome of those negotiations are totally dependent on the situation on the battlefield,” adding “it would be a tragedy for (the) Ukrainian people if President Putin wins.”

The foreign ministers of Bosnia, Georgia and Moldova — three partners that NATO says are under increasing Russian pressure — will also be in Bucharest. Stoltenberg said NATO would “take further steps to help them protect their independence, and strengthen their ability to defend themselves. 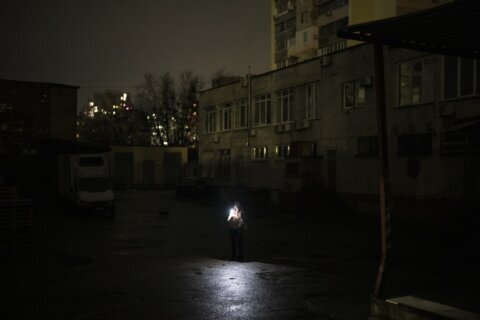 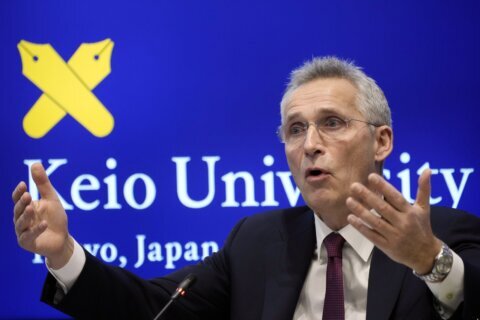 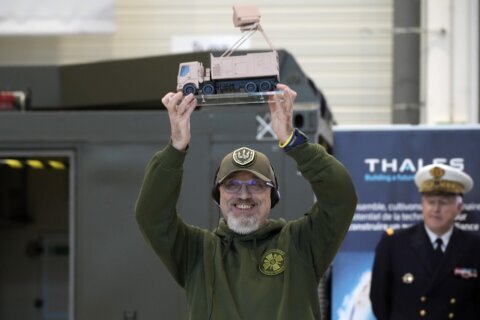 Ukraine hails French gift of radar as ‘cherry on the cake’