Holidays: Where to see holiday lights | Santa's back with inflation, inclusion on his mind | 4 ways to limit your holiday debt | Inflation 'definitely a guest' at holiday celebrations this year
Home » Russia/Ukraine War News » As Russia strikes power…

Winter's bite is coming. Hundreds of thousands of Ukrainians are facing a season that promises to be brutal.
Listen now to WTOP News WTOP.com | Alexa | Google Home | WTOP App | 103.5 FM
(1/15) 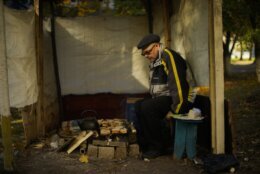 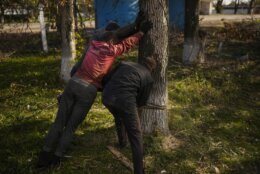 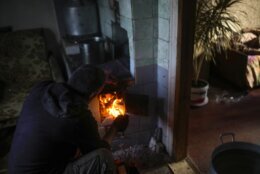 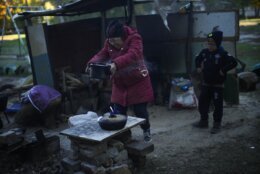 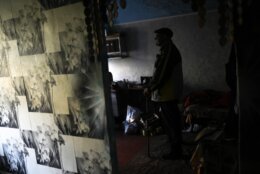 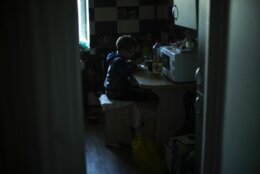 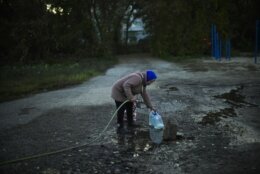 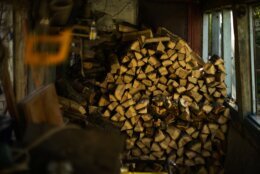 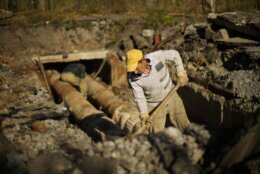 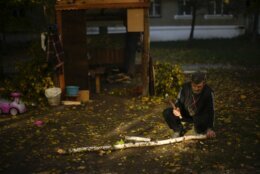 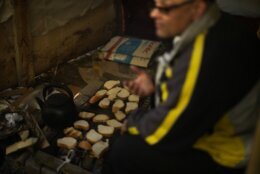 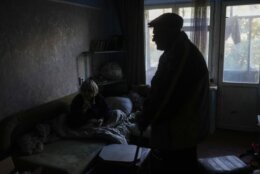 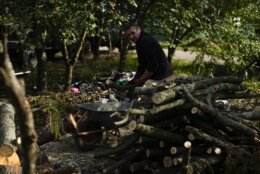 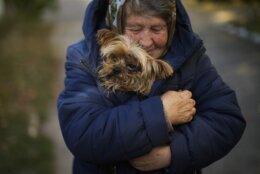 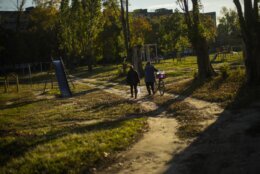 KIVSHARIVKA, Ukraine (AP) — Nine-year-old Artem Panchenko helps his grandmother stoke a smoky fire in a makeshift outdoor kitchen beside their nearly abandoned apartment block. The light is falling fast and they need to eat before the setting sun plunges their home into cold and darkness.

Winter’s bite is coming. They can feel it in their bones as temperatures drop below freezing. And like hundreds of thousands of other Ukrainians, they are facing a season that promises to be brutal.

Artem and his grandmother have been living without gas, water or electricity for around three weeks, ever since Russian missile strikes cut off the utilities in their town in Ukraine’s eastern Kharkiv region. For them and the few other residents that remain in the complex in Kivsharivka, bundling up at night and cooking outdoors is the only way to survive.

“It’s cold and there are bombings,” Artem said Sunday as he helped his grandmother with the cooking. “It’s really cold. I’m sleeping in my clothes in our apartment.”

Adding to the foreboding about the coming winter, Russian strikes on Monday and Tuesday in Kyiv, the capital, and several other Ukrainian cities by drones and missiles targeted power plants. Ukrainian President Volodymyr Zelenskyy said in a tweet Tuesday that over the past week Russian attacks have knocked out 30% of his country’s power plants causing “massive blackouts across the country.”

As the freeze sets in, those who haven’t fled from the heavy fighting, regular shelling and months of Russian occupation in eastern Ukraine are desperately trying to figure out how to dig in for the cold months.

In the nearby village of Kurylivka, Viktor Palyanitsa pushes a wheelbarrow full of freshly cut logs along the road toward his house. He passes a destroyed tank, the remnants of damaged buildings and the site of a 300-year-old wooden church that was leveled as Ukrainian forces fought to liberate the area from Russian occupiers.

Palyanitsa, 37, said he’s gathered enough wood to last the entire winter. Still, he planned to begin sleeping beside a wood-burning stove in a rickety outbuilding and not his home, since all the windows in his house have been blown out by flying shrapnel.

“It’s not comfortable. We spend a lot of time on gathering wood. You can see the situation we’re living in,” Palyanitsa said, quietly understating the dire outlook for the next several months.

Authorities are working to gradually restore electricity to the area in the coming days, and repairs to water and gas infrastructure will come next, according to Roman Semenukha, a deputy with the Kharkiv regional government.

“Only after that will we be able to begin to restore heating,” he said.

Authorities were working to provide firewood to residents, he added, but had no timeline for when the utilities would be restored.

Standing beside his pile of split wood, Palyanitsa was not waiting for government help. He said he didn’t expect heating to be restored anytime soon, but that he feels ready to fend for himself even once winter sets in.

“I have arms and legs. So I’m not scared of the cold, because I can find wood and heat the stove,” he said.

Authorities in the Ukrainian-controlled areas of the neighboring, hotly contested Donetsk region have urged all remaining residents to evacuate, and warned that gas and water services in many areas will likely not be restored by winter. Like in the Kharkiv region, ordinary Ukrainians are still living in thousands of homes that have been wrecked by Russian strikes, with leaky or damaged roofs and blown-out windows that are unable to provide protection against cold or wet weather.

The threat of a winter without heating has even spread to other areas of Ukraine far from the front lines.

Russian President Vladimir Putin, angered and embarrassed by a Ukrainian strike on a key bridge to annexed Crimea, has intensified Russia’s bombing campaign, targeting civilian energy infrastructure around Ukraine and leaving many cities and towns without electricity. Monday’s strikes hit Kyiv, Sumy in the northeast and Vinnytsia in western Ukraine.

In the center of Kurylivka, a group of men used a chainsaw to bring down a tree near a bus stop. As they worked, they warned an Associated Press reporter about the Russian land mines still hidden in the surrounding grass.

With so much of the area’s towns destroyed and modern comforts all but disappeared, the drive for survival trumps any concerns about the preservation of what was before. With no utilities, homes have become like rudimentary shelters from a medieval age where residents live by candlelight, gather water from wells and bundle up to fend off the cold.

Artem’s grandmother, Iryna Panchenko, said she and her grandson have been sleeping in an abandoned apartment next door since all their windows were blown out by a Russian strike.

“After the first explosion wave, we lost one window and two were damaged. After the second explosion, all the other windows were destroyed,” she said. “It’s very cold living here. It’s hard to cook, it’s hard to run between the apartment and where we cook. My legs hurt.”

Makeshift lean-to structures dot the overgrown courtyards of their apartment complex where residents gather to cook over fires. One woman collected scraps of wood from a ground-floor apartment that was caved in by a Russian rocket strike. Another resident joked that his home had become a five-room apartment after one of its exterior walls collapsed.

Anton Sevrukov, 47, toasted bread and heated a kettle of water over a fire to bring up tea to his disabled mother.

“No electricity, no water, no gas. We are cold,” he said. “I’m making tea for my mother on the fire but she only drinks a little bit to warm up for a short time.”

In the darkness of his cramped, musty apartment, Sevrukov’s mother sat under a blanket on a sofa piled with plates of spoiled food. Zoya Sevrukova said she’d been bedridden for seven years, and that she spends most of her time seated, playing solitaire with a worn pack of cards.

“It’s really cold now. If it weren’t for my son, I would freeze,” she said.

Sevrukov said he’d asked a friend from Kharkiv, the regional capital, to buy him an electric heater — just in case the power is restored. It’s almost too much to even think about the deprivation that could lie ahead.

“I hope we’ll have electricity soon, so we can live through this winter somehow,” he said. 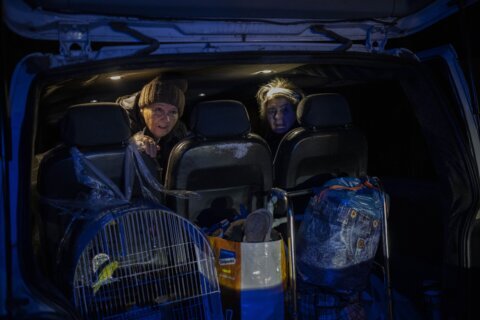 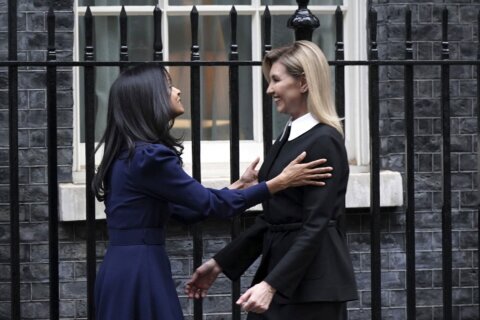