Ukraine claws back more territory Russia is trying to absorb

Ukrainian forces scored more gains in their counteroffensive across a broad front Monday, advancing in the very areas Russia is trying to annex and challenging its effort to bolster its military with fresh troops and its threats to defend incorporated areas by all means, including with nuclear weapons.
Listen now to WTOP News WTOP.com | Alexa | Google Home | WTOP App | 103.5 FM

KYIV, Ukraine (AP) — Ukrainian forces scored more gains in their counteroffensive across at least two fronts Monday, advancing in the very areas that Russia is trying to absorb and challenging Moscow’s effort to engage fresh troops and its threats to defend incorporated areas by all means.

In their latest breakthrough, Ukrainian forces penetrated Moscow’s defenses in the strategic southern Kherson region, one of the four areas in Ukraine that Russia is in the process of annexing.

Kyiv’s troops also consolidated gains in the east and other major battlefields, re-establishing Ukrainian control just as Russian President Vladimir Putin is trying to overcome problems with manpower, weapons, troop morale and logistics, along with intensifying domestic and international criticism. Putin faces disarray and anger domestically about his partial troop mobilization and confusion about the establishment of new Russian borders.

Ukraine’s advances have become so apparent that even Russian Defense Ministry spokesman Igor Konashenkov, who usually focuses on his military’s successes and the enemy’s losses, was forced to acknowledge it.

“With numerically superior tank units in the direction of Zolota Balka and Oleksandrivka, the enemy managed to forge deep into our defenses,” Konashenkov said Monday, referring to two towns in the Kherson region. He coupled that with claims that Russian forces inflicted heavy losses on Ukraine’s military.

Ukrainian forces have struggled to retake the Kherson region due to its open terrain, in contrast to their successful breakout offensive in the northeast around the country’s second-largest city of Kharkiv that began last month.

Ukraine has pressed its counteroffensive in the Kherson region since the summer, relentlessly pummeling Russian supply lines and making inroads into Russian-held areas west of the Dnieper River. The Ukrainian military has used U.S.-supplied HIMARS multiple rocket launchers to repeatedly hit the main bridge across the Dnieper and a dam that served as a second crossing. It also has struck pontoon bridges that Russia has used to supply its troops.

As the front lines shifted, the political theater in Moscow continued, with Russia’s lower house of parliament rubber-stamping annexation treaties for Ukraine’s Kherson, Zaporizhzhia, Donetsk and Luhansk regions to join Russia. The upper house will follow suit Tuesday. This follows annexation “referendums” that the Kremlin orchestrated last week that the U.N. chief and Western nations have said were illegal and fraudulent.

Russia’s moves to incorporate the Ukrainian regions, as well as Putin’s effort to mobilize more troops, have been done so hastily that government officials have struggled to explain and implement them. On Monday, the issue was basic: Exactly what areas of Ukraine is Russia trying to incorporate?

Kremlin spokesman Dmitry Peskov said Donetsk and Luhansk are joining Russia with the same administrative borders that existed before a conflict erupted there in 2014 between pro-Russian separatists and Ukrainian forces. But he added that the borders Zaporizhzhia and Kherson are still undecided.

“We will continue to discuss that with residents of those regions,” Peskov said.

A senior Russian lawmaker offered a different view. Pavel Krasheninnikov said Zaporizhzhia will be absorbed within its “administrative borders,” meaning Moscow plans to incorporate parts of the region still under Kyiv’s control. He said similar logic will apply to Kherson, but that Russia will include two districts of the neighboring Mykolaiv region that are now occupied by Russia.

In addition to the Kherson areas that Russia’s Defense Ministry cited, other sources showed Ukrainian flags, soldiers deployed or other signs that Kyiv’s forces had retaken the villages of Arkhanhelske, Myroliubivka, Khreshchenivka, Mykhalivka and Novovorontsovka. There was no immediate confirmation from Kyiv on the gains.

The situation in the regional capital, also called Kherson, was so precarious that Russian authorities are restricting people from leaving, Ukraine’s presidential office said.

A Russian-installed official in the Kherson region, Kirill Stremousov, acknowledged that the Ukrainian forces “have broken through a little deeper” but insisted that “everything is under control” and that Russia’s “defense system is working.”

Still, Russia claimed some success at pushing back. The Moscow-appointed chief of the Kherson region, Vladimir Saldo, said Ukrainian troops tried to advance toward Dudchany along the Dnieper’s western bank, seeking to reach a key dam at Nova Kakhovka, but that Russian warplanes destroyed two Ukrainian battalions and halted the offensive. Saldo also said Russian forces fended off Ukraine’s attempted inroads into the Kherson region from Mykolaiv and Kryvyi Rih.

Ukraine reported advances in other areas Russia is annexing. The Ukrainian governor of the Luhansk region, Serhiy Haidai, said Kyiv’s forces retook the village of Torske, 20 kilometers (12 miles) from the city of Kreminna. Ukrainian military analyst Oleh Zhdanov said the area is “key for controlling the entire Luhansk region, because further beyond (the city) the Russians don’t have any more lines of defenses.”

“Retaking this city opens up operational space for Ukrainians to rapidly advance to the very state border with Russia,” Zhdanov told The Associated Press.

He said Russian troops had retreated from the Kharkiv region. Ukraine’s army reportedly liberated most of Borova in the Kharkiv region across the Oskil River, 50 kilometers (31 miles) north of the city of Lyman. Officials posted a video while driving along recaptured streets, waving the Ukrainian flag.

“Finally, you are home. Finally, it’s Ukraine. Glory to Ukraine!” an onlooker yelled.

Elsewhere in the Kharkiv region, a doctor was killed and nurse wounded in a Russian missile attack on a hospital in Kupiansk that caused major damage, Gov. Oleh Syniehubov reported. Last week, at least 24 civilians were killed in an attack on a convoy trying to flee Kupiansk.

Ukraine also has retaken Lyman, a strategic eastern city that the Russians had used as a key logistics and transport hub. Lyman is in the Donetsk region near the border with Luhansk.

Ukraine’s push to recapture territory has embarrassed the Kremlin and prompted rare domestic criticism of Putin’s war. Tens of thousands of Russian men have fled Russia since the Sept. 21 call-up. Many flew to Turkey, one of the few countries maintaining air links with Russia. Others have left in cars, creating long traffic jams at the Russian borders with Georgia, Kazakhstan and Finland.

The International Atomic Energy Agency, the U.N.’s nuclear watchdog, said Monday that director general of the Russian-occupied Zaporizhzhia nuclear plant — Europe’s largest — had been released from Russian custody. Russian forces had blindfolded and detained Ihor Murashov on Friday for questioning. 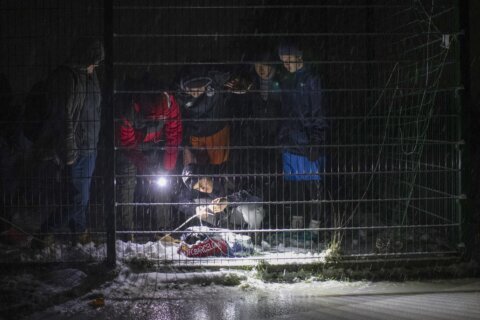