WASHINGTON (AP) — The U.S. will soon deliver to Ukraine four more of the advanced rocket systems credited with helping the country’s military gain momentum in its war with Russia.

The High Mobility Artillery Rocket Systems, known as HIMARS, will be part of a new $625 million package of aid expected to be announced on Tuesday, according to U.S. officials.

The decision marks the first time the U.S. has sent more HIMARS to Ukraine since late July, and it will bring the total number delivered so far to 20. The systems have become a key tool in Ukraine’s ability to strike bridges that Russia has used to supply its troops, enabling Ukrainian forces to make inroads in Russia-controlled regions.

The U.S. in recent weeks also provided funding through a separate program — the Ukraine Security Assistance Initiative — so another 18 HIMARS can be purchased through longer-term contracts. USAI funds are being used as part of the effort by the U.S. and Western allies to ensure Ukraine’s forces are trained and equipped to defend their country in the years to come. But those contracts will take several years to fulfill.

The latest aid package is also expected to include other ammunition and equipment for Ukraine’s troops. Several U.S. officials spoke on condition of anonymity to provide details of the package ahead of the announcement. This is the first tranche of U.S. aid delivered in the new fiscal year, which began Oct. 1.

Ukraine has pressed its counteroffensive in the Kherson region since the summer, relentlessly pummeling Russian supply lines and making inroads into Russian-held areas west of the Dnieper River. Ukrainian troops have been using the HIMARS to repeatedly hit the main bridge across the Dnieper and a dam that served as a second crossing. It also has struck pontoon bridges that Russia has used to supply its troops.

Ukraine’s battlefield successes in Kherson are notable since that is one of the four areas that Russia is in the process of annexing.

A senior U.S. military official said Monday that the attacks by Ukrainian forces have forced Russia into a “defensive crouch” in Kherson, hampering Russian efforts to resupply their frontline troops.

The official, who briefed reporters on condition of anonymity to provide a U.S. military assessment of the war, said that so far the U.S. has seen only small numbers of Russian reinforcements coming into Ukraine in an effort to shore up their defenses. Russia has said it will mobilize upwards of 300,000 conscripts to send to Ukraine.

The official also said that despite persistent Russian threats to use nuclear force, the U.S. has seen no moves by the Kremlin that would cause the U.S. to change its own nuclear posture. 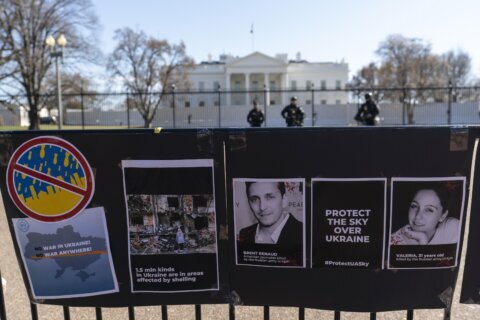