KYIV — A Ukrainian official says the bodies of 530 people have been discovered in recaptured areas of Kharkiv region since Sept. 7.

Some 447 of the bodies were found in the mass grave in Izium. Yenin said forensics experts have found indications of “violent death in a considerable number of bodies” including signs of torture.

According to Yenin some bodies “had a rope around their neck, hands tied behind their back, bullet wounds to their knees, and broken ribs.”

Overall 1,350 civilians were killed in the Kharkiv region since the start of the war. Serhiy Bolvinov head of the Kharkiv region’s State Police Investigative Department, said 22 torture sites were found in recently liberated areas.

— Putin’s path: from pledges of stability to nuclear threats

Zelenskyy said in his nightly video address that he had signed a decree, following up on action taken by Ukraine’s parliament, confirming “respect for the sovereignty and territorial integrity of Japan,” including the disputed islands.

“Russia has no right to these territories,” Zelenskyy said, echoing language he has used about Russia’s invasion of Ukraine and its illegal annexation of Ukrainian land.

In March, Russia discontinued peace treaty talks with Japan over the Kuril islands and decided to withdraw from joint economic projects in retaliation for Tokyo’s sanctions over the Russian invasion of Ukraine.

The two countries never signed a peace treaty formally ending World War II hostilities because of their dispute over the Russian-held islands north of Hokkaido, which Moscow took at the end of the war.

___ KYIV, Ukraine — Two burial sites were found in the recently recaptured Ukrainian city of Lyman and one of them is a mass grave, authorities said Friday.

The burial site with around 200 individual graves is civilians buried there, says Donetsk Governor Pavlo Kyrylenko. In the mass grave, he said it could contain the bodies of civilians and soldiers and the exact number of people buried there is yet to be determined.

The city was recaptured from Russian forces who had occupied it for months.

About 24 kilometers (15 miles) from Lyman, in the recently liberated city of Sviatohirsk, 21 bodies of civilians were reburied.

“While the battles for Sviatohirsk and the occupation continued, the killed people were buried in the streets and yards,” Kyrylenko wrote on his Telegram site.

The initial amount is only 100 million euros, only a fraction of the 2.5 billion euros the EU has already spent in support of Ukraine’s war effort.

Macron didn’t offer details on the fund as the Ukrainian military presses ahead with its counteroffensive against Russian occupying forces.

He also said France is close to a deal with Denmark on sending an additional six Caesar self-propelled howitzers cannons to Ukraine.

KYIV — Officials say the death toll from a Russian missile attack on an apartment building in the Ukrainian city of Zaporizhzhia has risen to 12.

The Zaporizhzhia Regional Administration said Friday 21 people were rescued from the rubble of residential buildings that were hit with modified S-300 missiles. A dozen people remain hospitalized, including two childrent.

Regional Governor Oleksandr Staruch posted on his Telegram channel that this was not random, but a deliberate strike on multi-story buildings.

Lukashenko presented Putin with a gift certificate for the vehicle as the leaders of several ex-Soviet nations met at the Czarist-era Konstantin Palace in St. Petersburg on Friday. It wasn’t clear how the Russian leader responded to the gift, which Lukashenko’s office announced.

The billboards in Belgrade feature Putin’s photo and read: “Happy birthday to President Vladimir Putin from the Serb brethren!” The posters are signed by a Pro-Russian right-wing group.

Putin remains popular in Serbia despite the attack on Ukraine and many in the Balkan country believe that the Russian president was provoked by the West into launching the invasion.

NICOSIA, Cyprus — Ukraine’s environmental protection minister says an accident at the Russian-occupied Zaporizhzhia nuclear power plant could release 10 times the amount of potentially lethal radioactivity than the world’s worst atomic accident did in Chernobyl 36 years ago.

Ruslan Strilets who is in Cyprus for a U.N. environmental conference, told the Associated Press in an interview Friday that a release of radioactivity of that magnitude could expand to as much as 2 million sq. km (772,200 sq. miles), “three times larger than Ukraine’s total area” or an area half the size of the European Union. An accident could also spark “a wave of environmental refugees” fleeing to other areas of Ukraine or abroad.

According to Strilets, about 3 million hectares (7.4 million acres) of forest have been damaged or burned since the Feb. 24 launch of the Russian invasion. Forest fires in combination with Russian attacks on oil depots and industrial facilities have spewed more than 67 million tons of pollutants into the air. Currently, 812 nature-protected areas have either been damaged or remain under threat.

He added that a preliminary assessment on environmental damage the war has caused in the last seven months puts the cost at over 36 billion euros ($35.25 billion).

THE HAGUE, Netherlands — Dutch financial crime prosecutors say they have arrested a 55-year-old man on suspicion of breaching sanctions by selling computer chips to companies in Russia that could have military uses.

The tax service’s prosecution office, known by its Dutch acronym FIOD, said Friday that the man was arrested Sept. 27 in the eastern Netherlands and remains in custody. His identity was not released, in line with Dutch privacy regulations.

FIOD said in a statement that the chips he delivered to Russia “can also be used for producing weapons.” It added that the Russian weapon industry currently has a serious shortage of these microchips.

FIOD says the man allegedly deliberately tried to evade sanctions by pretending the chips had destinations other than Russia.

Reiss-Andersen told reporters in Oslo the laureates “have revitalized and honored Alfred Nobel’s vision of peace and fraternity between nations, a vision most needed in the world today” through their consistent efforts in favor of human values, anti-militarism and principles of law.

The award follows a tradition of highlighting groups and activists trying to prevent conflicts, alleviate hardship and protect human rights.

KYIV — A spokesman for Ukraine’s president says Volodymyr Zelenskyy would never ask NATO to launch a nuclear first strike to prevent Russia from unleashing its own nuclear arsenal.

Zelenskyy’s press officer Serhiy Nikiforov said Friday the Ukrainian president’s remark during a discussion at Australia’s Lowy Institute didn’t imply that NATO should launch a preemptive nuclear attack, but instead to act proactively with additional sanctions as it should have done prior to Russia’s Feb. 24 invasion.

Ukrainian presidential advisor Mykhailo Podolyak posted on Twitter that Zelenskyy’s reference to strikes meant that the West should step up sanctions as well as military aid to Ukraine.

In response to a question about what NATO should do to deter Russia from using nuclear weapons, Zelenksyy told the Lowy Institute the alliance should “make it impossible for Russia to use nuclear weapons” through “preemptive strikes, so they know what will happen to them if they do.”

KYIV — Britain’s Defense Ministry says Ukraine’s ability to capture and put back into service Russian tanks and other equipment continues to be an important factor in its drive to repel the invasion.

The Ministry said Friday Ukrainian forces have captured at least 440 tanks and about 650 armored vehicles since the start of the war.

It also said the failure of Russian crews to destroy intact equipment before withdrawing or surrendering “highlights their poor state of training and low levels of battle discipline.”

KYIV — The Ukrainian military says its forces have shot down more than 20 Russian drones over the last 24 hours.

Most of the drones were the Iranian-made Shahed-136 that are packed with explosives and are designed to crash into targets.

The military also said that 500 former criminals have been mobilized to reinforce Russian ranks in the eastern Donetsk region, where Ukrainian forces have been retaking territory. The new units are commanded by officers drawn from law enforcement.

The Washington-based Institute for the Study of War says Russia has increasingly deployed the cheaper an less sophisticated Iranian-made drones in recent weeks, but the weapons are unlikely to significantly affect the course of the war.

Nikopol is situation along the Dnieper River, opposite Russian-held territory. Russian forces are trying to blunt recent Ukrainian advances along the southern front.

PRAGUE — European Union leaders are meeting in Prague to try to bridge significant differences over a natural gas price cap as winter approaches and Russia’s war on Ukraine fuels the energy crisis.

It’s hoped that a price cap will contain a crisis that is driving up prices for consumers and business. It could lead to rolling blackouts, shuttered factories and a deep recession over the winter.

As Europeans bolster their support for Ukraine in the form of weapons, money and aid, Russia has reduced or cut off natural gas to 13 member nations.

Standing in the way of an agreement at Friday’s summit is the simple fact that each member country depends on different energy sources and suppliers.

NEW YORK — U.S. President Joe Biden says the risk of nuclear “Armageddon” is at the highest level since the 1962 Cuban Missile Crisis.

Biden’s remarks came as Russian officials speak of the possibility of using tactical nuclear weapons after suffering massive setbacks in the eight-month invasion of Ukraine.

Speaking at a fundraiser Thursday for the Democratic Senatorial Campaign Committee, Biden said Russian President Vladimir Putin was “not joking when he talks about the use of tactical nuclear weapons or biological or chemical weapons.”

Biden added that “we have not faced the prospect of Armageddon since Kennedy and the Cuban Missile Crisis.”

UNITED NATIONS — Russia is calling for a secret ballot next week in the U.N. General Assembly on a Western-backed resolution that would condemn Moscow for its “attempted illegal annexation” of part of four Ukrainian regions and demand an immediate reversal.

Russia apparently hopes it would get more support from the 193 nations if their votes are not made public.

The General Assembly has announced that its emergency special session on Ukraine will resume Monday when the draft resolution will be presented. Diplomats say they expect the vote on the resolution likely on Wednesday.

Votes on resolutions in the world body are traditionally public and illuminated with different colored lights on a large board which has the name of every country.

On the money: Yellen’s next milestone is name on US currency 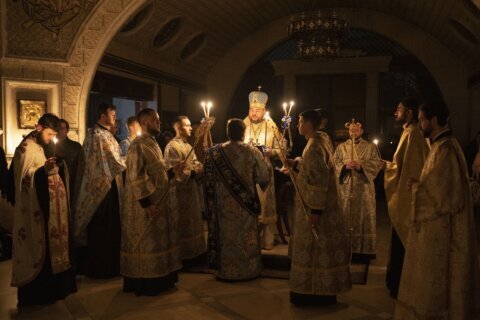