KYIV, Ukraine — The head of the U.S. Agency for International Development has met with Ukrainian President Volodymyr Zelenskyy to discuss Ukraine’s humanitarian, economic and development needs.

At a briefing in Kyiv on Thursday, USAID director Samantha Power said that “this war will be won on the battlefield, but it is also being won in Ukraine’s ongoing efforts to strengthen its democracy and its economy.”

Power says her visit included meetings with Ukrainian farmers, civil society activists, journalists and groups that USAID has been supporting to identify and document war crimes.

Earlier in the day, Power announced that USAID has committed an additional $55 million to assist Ukraine with repairs to heating pipes and other infrastructure and equipment. USAID has since February given $9.89 billion in aid to Ukraine.

UNITED NATIONS — Russia is calling for a secret ballot next week in the U.N. General Assembly on a Western-backed resolution that would condemn Moscow for its “attempted illegal annexation” of part of four Ukrainian regions and demand an immediate reversal.

Russia apparently hopes it would get more support from the 193 nations if their votes are not made public.

The General Assembly has announced that its emergency special session on Ukraine will resume Monday when the draft resolution will be presented. Diplomats say they expect the vote on the resolution likely on Wednesday.

Votes on resolutions in the world body are traditionally public and illuminated with different colored lights on a large board which has the name of every country.

KYIV, Ukraine — The head of the U.N.’s atomic energy agency says it’s doubling to four the number of inspectors that it plans to deploy to the Zaporizhzhia nuclear power plant in a Russian-controlled area of southern Ukraine as fighting continues in the region, threatening its safety.

He said he would take up that issue and hopes of establishing a secure protection zone around the nuclear power station during talks with an unspecified “very high-level” official when he travels soon to Moscow.

Grossi emphasized that despite Russia’s proclaimed — and widely criticized — annexation of the Zaporizhzhia oblast, or region, the plant remains a Ukrainian facility that belongs to state-run company Energoatom.

Dmytro Lubinets wrote in a post on his Facebook page on Thursday that Russians “took them away on trucks to an unknown destination” a day earlier. He cited information from the Estonian Interior Ministry about the transfers.

Amid Russia’s war in Ukraine, most of those Ukrainians had fled their country through Russia and Crimea and were seeking ways to enter the European Union — Estonia is a member state — or find a way to return home, Lubinets wrote.

Some travelers, including women, the elderly, and children, were waiting to cross the Russia-Estonia border in cold, humid weather without proper clothes or food, he said, adding that he planned to bring up the matter with Russia’s commissioner for human rights.

Lubinets noted that a mission from the Organization for Security and Cooperation in Europe, which counts both Russia and Ukraine as members, was expected to meet next week with Ukrainians who had been processed through Russian “filtration camps.”

Also Thursday, Estonian Foreign Minister Urmas Reinsalu said: “We condemn the Russian Federation for not allowing war refugees to cross the border,” saying such actions could amount to provocations by Moscow along the EU-Russia border.

KYIV, Ukraine — Ukrainian forces have retaken 400 square kilometers (155 square miles) of territory in the southern Kherson region, so far this month as they continue to push Russian troops back in the south and east, Ukraine’s southern military command says.

Natalia Humeniuk, spokesperson for the Ukrainian military’s Operational Command South, said in a briefing Thursday that the situation along the southern front was rapidly changing and remained complicated.

Ukraine has recaptured 29 settlements in the oblast since Oct. 1, Oleksii Hromov, deputy chief of the Main Operational Department of the Ukrainian army’s General Staff, told a separate briefing.

BRUSSELS — The European Union on Thursday froze the assets of an additional 37 people and entities tied to Russia’s war in Ukraine, bringing the total of EU blacklist targets to 1,351.

The newly sanctioned people include officials involved in last week’s illegal Russian annexation of — and sham referenda in — the Ukrainian regions of Donetsk, Luhansk, Kherson and Zaporizhzhia.

The latest sanctions, published in the EU’s Official Journal, also widen trade bans against Russia and lay the ground for a price cap on Russian oil being prepared with other G-7 members. The new commercial curbs hit an estimated 7 billion euros ($6.9 billion) of EU imports of Russian goods including steel, plastics, textiles and non-gold jewelry.

The wider EU prohibition on exports to Russia covers such products as coal, electronics used in Russian weapons and aircraft components.

COPENHAGEN, Denmark – Norway on Thursday said that Russian fishing vessels can only call at three Arctic ports ports, and that all Russian vessels arriving at these ports will be checked.

Russian fishing boats only will be allowed in three Arctic ports — Kirkenes, Tromsø and Båtsfjord.

“We now have information which indicates that there is a need to increase the control of Russian fishing vessels, Foreign Minister Anniken Huitfeldt said.

“The recent serious developments with Russia’s unacceptable annexation of Ukraine, the attacks on gas pipelines in the Baltic Sea and increased drone activity, means that the government has further tightened preparedness.

“This will make it more difficult to use Russian fishing vessels for illegal activities, for example by circumventing export regulations, ”Justice Minister Emilie Enger Mehl added.

In April, the European Union, of which Norway is not a member, banned Russian vessels from entering EU ports. Norway followed suit with the exception of fishing boats, which led to criticism from the Norwegian opposition.

Authorities in Norway, a major oil and gas producer, have reported several drone sightings near offshore installations in the North Sea.

PRAGUE — Czech social media users have shared satirical tweets claiming that the Czech Republic has annexed the Russian territory of Kaliningrad and renamed it Královec.

It is a satire on Russia’s illegal annexation of four Ukrainian territories where Kremlin-installed authorities held voter “referendums” that Ukraine and its allies regard as an illegitimate farce.

Even Slovak President Zuzana Caputova got in on the joke on Thursday, tweeting “I might consider a state visit. Or not.” Turning serious, she added: “Well done our #Czech friends for de-masking the absurdity of #Russia’s fictitious referendums in #Ukraine.”

An anonymous Twitter user in Poland first posted about the fake “annexation” of Kaliningrad. A Czech member of the European Parliament, Tomasz Zdechovsky, then posted about it. There has since been an explosion of jokes under the hashtags Kralovec and VisitKralovec.

CANBERRA, Australia — Ukrainian President Volodymyr Zelenskyy said on Thursday it was “hard to say” whether the risk of nuclear war had increased with his military’s territorial gains, but he remains confident his Russian counterpart would not survive such as escalation in hostilities.

The Russians found it “hard to control everything that is happening in their country, just as they’re not controlling everything they have on the battlefield,” Zelenskyy said.

Putin “understands that after the use of nuclear weapons he would be unable any more to preserve, so to speak, his life,” Zelenskyy said, “and I’m confident of that.”

WARSAW, Poland –- Poland is distributing potassium iodide tablets to regional firefighters’ stations in a pre-emptive measure in case of damage to Ukraine’s Zaporizhzhia nuclear power plant, which is occupied by Russian troops.

Stored in some 1,500 stations nationwide, the potassium iodide pills would be distributed to Poles in case of real threat, the government said. Deputy interior and administration minister, Blazej Pobozy, has said radioactive contamination is “very unlikely.”

The Zaporizhzhia plant, some 1,000 kilometers (600 miles) from Poland’s eastern border, is Europe’s largest. It was damaged recently in the fighting with Russian forces.

Prime Minister Mateusz Morawiecki signed the decision Thursday to raise security to the second out of four levels, through November. The decision means that security services need to be especially vigilant and ready to react to any potential terrorist threats.

Poland recently opened a new natural gas pipeline from Norway, the Baltic Pipe, that partly runs on the Baltic seabed. It is helping Poland cut its decades-long dependence on Russian gas.

Last week Russian’s Nord Stream pipelines suffered leaks in the Baltic Sea caused by explosions, widely believed to be the result of sabotage.

KYIV, Ukraine — The U.S. deployed its international development chief to Ukraine on Thursday, the highest-ranking American official to visit the country since Russia illegally annexed the four regions.

The head of the U.S. Agency for International Development, Samantha Power, traveled to Kyiv and was holding meetings with government officials and residents. She said the U.S. would provide an additional $55 million to repair heating pipes and other equipment.

Among the sites she visited were a Kyiv neighborhood and school that had previously been hit by Russian missiles.

USAID said the United States has delivered $9.89 billion in aid to Ukraine since February.

A spending bill signed by President Biden last week promises another $12.3 billion in Ukraine-related aid — directed both at military and public services needs. Power said Washington plans to release the first $4.5 billion of that funding in the coming weeks.

KYIV, Ukraine — The head of the U.N.’s nuclear watchdog is expected to visit Kyiv this week to discuss the situation at the Zaporizhzhia Nuclear Power Plant, which has been occupied by Russian troops since the early part of the war.

Russian President Vladimir Putin signed a decree Wednesday declaring that Russia was taking over the six-reactor plant, the largest in Europe.

Ukraine’s Foreign Ministry called it a criminal act and said it considered Putin’s decree “null and void.” The state nuclear operator, Energoatom, said it would continue to operate the plant.

Rafael Grossi, the director-general of the International Atomic Energy Agency, plans to talk with Ukrainian officials about the Russian move.

He will also discuss efforts to set up a secure protection zone around the facility, which has been damaged in the fighting and seen staff including its director abducted by Russian troops.

Grossi will travel to Moscow for talks with Russian officials after his stop in Kyiv. 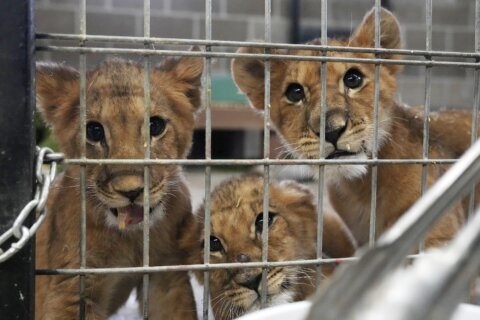