US: Hundreds of thousands of Ukrainians forced to Russia

The U.S. said Wednesday it has evidence that “hundreds of thousands” of Ukrainian citizens have been interrogated, detained and forcibly deported to Russia in “a series of horrors” overseen by officials from Russia’s presidency.
Listen now to WTOP News WTOP.com | Alexa | Google Home | WTOP App | 103.5 FM

UNITED NATIONS (AP) — The U.S. said Wednesday it has evidence that “hundreds of thousands” of Ukrainian citizens have been interrogated, detained and forcibly deported to Russia in “a series of horrors” overseen by officials from Russia’s presidency.

Russia immediately dismissed the allegation as “fantasy,” calling it the latest invention in a Western disinformation campaign.

The charge came during a Security Council meeting called by the United States and Albania to discuss Russia’s “filtration operations.”

That involves Ukrainians voluntarily fleeing the war in their homeland and those forcibly being moved to Russia passing through a series of “filtration points” where treatment allegedly ranges from interrogations, data collection and strip searches to being yanked aside, tortured, sent to a detention center in Russia and never seen again. The Associated Press wrote in July that nearly 2 million Ukrainian refugees have been sent to Russia, many through forcible transfers.

US. Ambassador Linda Thomas-Greenfield said estimates from a variety of sources, including the Russian government, indicate that Russian authorities have interrogated, detained and forcibly deported between 900,000 and 1.6 million Ukrainians. She said they are sent to Russia, often to isolated regions in its far eastern regions.

“These operations aim to identify individuals Russia deems insufficiently compliant or compatible to its control,” Thomas-Greenfield said. “And there is mounting and credible evidence that those considered threatening to Russian control because of perceived pro-Ukrainian leanings are `disappeared’ or further detained.”

Russia’s presidency is not only coordinating filtration operations but is providing lists of Ukrainians to be targeted for filtration, she added.

She said estimates indicate thousands of children have been subject to filtration, “some separated from their families and taken from orphanages before being put up for adoption in Russia.” According to U.S. information, “more than 1,800 children were transferred from Russian-controlled areas of Ukraine to Russia” just in July, she said.

He said more than 3.7 million Ukrainians, including 600,000 children, have gone to Russia or Russian-controlled separatist areas in eastern Ukraine, but they “aren’t being kept in prisons.”

Nebenzia said those Ukrainians went through “a registration rather than filtration procedure” similar to that for Ukrainian refugees in Poland and other countries in the European Union.

He said that since “we’ve wasted time talking about the latest conjectures and fantasies” Wednesday, Russia is proposing that the Security Council hold a meeting Thursday “on real threats to international peace and security caused by the supply by foreign states of arms and military goods to Ukraine.”

It will be the third consecutive Security Council meeting on Ukraine. On Tuesday, the council held a meeting at Russia’s request to hear about the situation at the Zaporizhzhia nuclear plant in southeastern Ukraine. Ukraine and Russia have accused each other of shelling the facility and threatening a possible nuclear catastrophe.

Thomas-Greenfield said the United States knew Russia would deny using filtration, “but there’s a simple way to know if any of this is true.”

“Let the United Nations in,” she told Nebenzia and other council members. “Give the independent observers access. Give NGOs access. Allow humanitarian access. Let the world see what Is going on.”

She called for U.N. access to Ukrainians living in Russian-controlled areas and reiterated that the International Committee of the Red Cross and the U.N. Human Rights Monitoring Mission in Ukraine “must have unimpeded access to all individuals detained in relation to the ongoing war.”

“This includes access to places of internment of Ukrainian prisoners of war and detainees in the Russian Federation,” she said. “Both sides to the conflict must fully abide with their obligations under international law.”

Ilze Brands Kehris, the U.N. assistant secretary-general for human rights, urged Russia to provide her Geneva-based office access to all places of detention. She added that any adoptions of Ukrainian children in Russia would violate the Geneva Convention prohibiting the change of a child’s personal status including its nationality.

Kehris said the U.N. human rights office “has verified” that Russian armed forces and affiliated armed groups subject civilians to “filtration” security checks, which according to credible reports it received result in numerous human rights violations, including the rights to liberty, personal security and privacy.

The human rights office has documented that Russian troops and their affiliates subject Ukrainians to body searches that sometimes include nudity, interrogations about their personal background, family ties, political views and allegiances, and examinations of mobile devices, Kehris said.

The office has also documented that men and women perceived to having ties to Ukraine’s military or government, or as having pro-Ukrainian or anti-Russian views “were subjected to arbitrary detention, torture, ill-treatment and forced-disappearance” and were transferred to penal colonies, Kehris said. 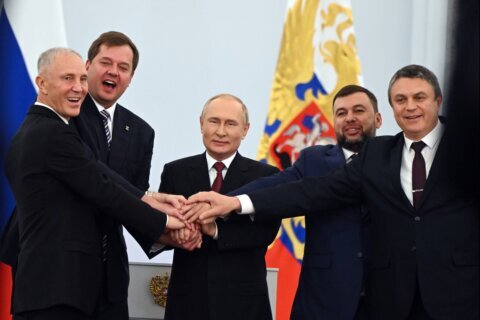