Ukraine pays tribute to Russian woman who fought on its side

An honor guard fired a three-gun salute toward cloudy skies as friends and comrades-in-arms gathered in Kyiv to bid farewell to a Russian woman who was killed while fighting on Ukraine’s side in the war with her native country.
Listen now to WTOP News WTOP.com | Alexa | Google Home | WTOP App | 103.5 FM

KYIV, Ukraine (AP) — An honor guard fired a three-gun salute toward cloudy skies as friends and comrades-in-arms gathered in Kyiv to bid farewell to a Russian woman who was killed while fighting on Ukraine’s side in the war with her native country.

Olga Simonova, 34, was remembered for her courage and kindness at a funeral in the Ukrainian capital on Friday.

Simonova’s coffin was draped in the blue-and-yellow Ukrainian flag, with a cuddly toy lion on top. Her nom de guerre was “Simba,” like the main character in the Disney cartoon “The Lion King.”

Just a few days before Russia launched its full-scale invasion of Ukraine on Feb. 24, Simonova spoke to The Associated Press in a trench in the Donbas region, where she had served for years alongside Ukrainian soldiers fighting against Russian-backed separatists.

Born in the Russian city of Chelyabinsk, Simonova had a keen interest in sports and excelled in both mountain climbing and karate. She said she was always proud to compete for Russia.

But she started feeling uncomfortable about her native country after reading about Russia’s war in Chechnya and its actions in Ukraine’s eastern Donbas region and Crimea, which Russia annexed in 2014.

Filled with doubts that she “would ever be able to raise the flag of my country, my homeland” again, Simonova made a life-changing decision. She travelled to Ukraine to join the conflict in the Donbas on the Ukrainian side, first as a volunteer fighter, then a paramedic and ultimately as an enlisted member of the Armed Forces.

“I had this internal feeling that I could handle it and that what I was doing was right and necessary, because I can’t turn a blind eye to the situation,” she said. “I just had to buy a one-way ticket. I bought it and I left.”

Simonova said she never hid her Russian origin from her colleagues and gained their trust by showing her commitment to Ukraine on the battlefield. In 2017 she received Ukrainian citizenship.

She became a sergeant and was given command of both infantry and artillery units.

Friends and colleagues said Simonova, who was unmarried and had no children, had recently redeployed from the east to the southern Kherson region, where Ukraine has launched a counteroffensive against Russian forces. They said she died on Sept. 13, after her vehicle hit a land mine.

“She was respected not only as a commander, but as a person,” said Dmytro Karabinovskyi, her former commander and friend. 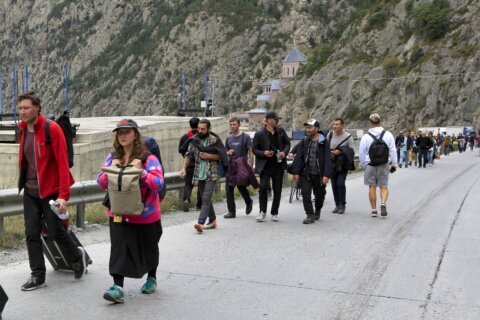 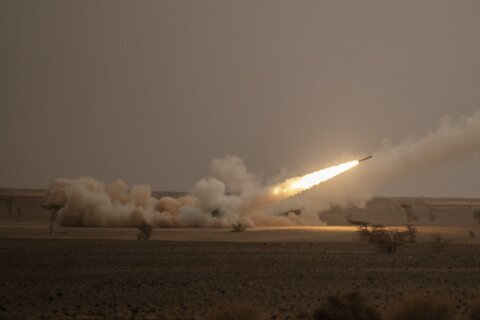