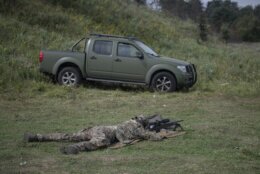 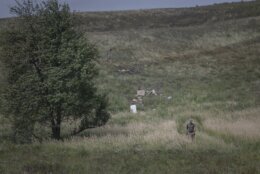 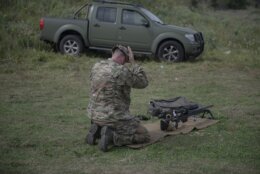 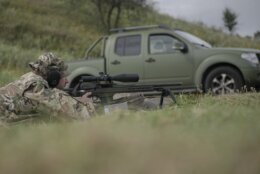 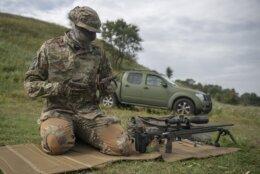 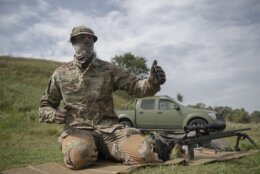 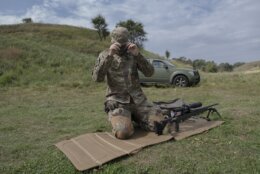 “I need to be completely relaxed, to find a place where I will not move the rifle when I pull the trigger,” he says. “I don’t think about anything. It’s a kind of vacuum.”

In a semicircle around his head are boxes of bullets, printouts of charts, a heavy-duty stapler and a roll of tape.

Strapped to his wrist is a monitor, which is the shape of a jewelry box. It’s a ballistics calculator to factor in the wind and other surrounding conditions. Bees persistently circling his head and scope are ignored.

After a long pause, he says the word “shot” in Ukrainian.

Crack! A sound not unlike a starting gun used at sporting events produces a reflexive jolt in people unaccustomed to war.

Six months ago, the noise might have startled Andriy, who had moved to Western Europe to pursue a career in engineering.

His experience resembles that of many Ukrainians who returned home to the war, abruptly pulled from civilian life to embrace fighting methods ‒ modern but also makeshift ‒ that have held back the far larger Russian military.

Andriy comes from Bucha, a district near Kyiv’s airport that was hammered during the Russian advance. Hundreds of civilian killings took place there, the bodies found in mass graves or left lying where they were shot in what the United Nations describes as potential war crimes.

Tall and with a good command of English, the sniper spoke to The Associated Press while practicing alone at an informal firing range near Kyiv, hoping to resolve some issues with his weapon through hours of trial and error before his next deployment.

He asked only to be identified by his first name and that some details of his civilian life remain private.

Andriy scrambled home, taking a flight to Budapest and arranging an 1,200-kilometer (750-mile) overland route that included paying “a big amount of money” to a driver willing to take a risky journey eastward. Within a few days he had joined the ferocious fight around Kyiv, adopting the war nickname “Samurai.”

He bought his own gear and a U.S.-made sniper rifle, and began receiving training from a special forces instructor, connected through friends in the military.

“Early in the morning on Feb. 24, I received a call from my mother. She lives in Bucha and told me the war had started. She could hear helicopters, airplanes, bombing and explosions. I decided to return,” he said.

While not allowed to discuss any specifics of his operational activity, Andriy describes Ukraine’s military as a force that prides itself on flexibility, harnessing a wide range of skills from its personnel to become more versatile in combat.

“I have also gained experience in tactical medicine, with drones and shooting with assault rifles,” he said.

Military specialists are encouraged to learn new skills and even find their own equipment, with Western suppliers still delivering to Ukraine in a private market that is monitored by the army.

To protect his hearing, Andriy acquired a set of hunter’s headphones that suppress the noise from his rifle while amplifying voices. “You really need these,” he says.

Russia has more than doubled the territory it controls in Ukraine since launching the invasion in February, to about 20% of the country, but Andriy shares the optimism of many fellow Ukrainians that victory will be possible after the winter.

“I think with the help of our friends in Europe and the United States that we can push them out of our territory,” he said.

His desire to become a sniper came from a familiarity with hunting rifles, common in Ukraine, and playing the role of a distance shooter in video games.

“No one of us wanted to be a warrior, a shooter, a sniper. It’s just a necessity to be here now and do what we’re doing here.”

After a pause he adds: “I don’t know how to explain this: I don’t like to kill people. It’s not something you want to do, but it’s something you have to do.”

Follow AP coverage of the war in Ukraine at https://apnews.com/hub/russia-ukraine

Ukraine claws back more territory Russia is trying to absorb