A senior defense official told reporters that a new $775 million aid package will include 15 Scan Eagles, 40 mine-resistant, ambush-protected vehicles known as MRAPs with mine-clearing rollers, and 2,000 anti-armor rounds that can help Ukraine troops move forward in the south and east, where Russian forces have placed mines. The official said the U.S. is looking to help shape and arm the Ukrainian force of the future as the war drags on.

“These capabilities are carefully calibrated to make the most difference on the battlefield and strengthen Ukraine’s position at the negotiating table,” Secretary of State Antony Blinken said in a statement.

Ukrainian President Volodymyr Zelenskyy tweeted his appreciation for the package Friday, saying “We have taken another important step to defeat the aggressor.”

This latest aid comes as Russia’s war on Ukraine is about to reach the six-month mark. It brings the total U.S. military aid to Ukraine to about $10.6 billion since the beginning of the Biden administration. It is the 19th time the Pentagon has provided equipment from Defense Department stocks to Ukraine since August 2021.

The U.S. has provided howitzer ammunition in the past, but this is the first time it will send 16 of the weapon systems. The aid package also includes 1,500 anti-tank missiles, 1,000 javelin missiles and an undisclosed number of high-speed, anti-radiation or HARM missiles that target radar systems. The Ukrainian forces have been successfully using various precision artillery systems to try and hold off Russian forces and take back territory Moscow has gained.

The defense official briefed reporters on the new weapons aid on condition of anonymity under ground rules set by the Defense Department.

For much of the last four months of the war, Russia has concentrated on capturing the Donbas region of eastern Ukraine, where pro-Moscow separatists have controlled some territory as self-proclaimed republics for eight years.

Russian forces have made some incremental gains in the east, but they have also been put on the defensive in other regions, as Ukraine ratchets up its attacks in Ukraine’s Black Sea peninsula of Crimea. The Russian-occupied territory was seized by Moscow in 2014. Nine Russian warplanes were reported destroyed last week at an airbase on Crimea in strikes that highlighted the Ukrainians’ capacity to strike deep behind enemy lines.

Russian leaders have warned that striking facilities in Crimea marks an escalation in the conflict fueled by the U.S. and NATO allies and threatens to pull America deeper into the war.

One Western official said Friday that the war is at a “near operational standstill,” with neither side able to launch major offensives. The official, who spoke on condition of anonymity to discuss military assessments, said the whole tempo of the campaign has slowed, partly because both sides recognize that “this is a marathon not a sprint and that expenditure rates and conserving their munitions is important.”

But the U.S. and Western officials both said that Ukraine has been able to launch successful attacks deep behind Russian battle lines, which is eroding logistics support and command and control of Moscow’s forces, and harming their morale.

The U.S. official said that while Ukrainian troops haven’t been able to retake a lot of territory, they have been able to significantly weaken Russian positions in a number of places.

Efforts to tamp down the fighting have also continued. On Thursday, Turkey’s leader and the U.N. chief met in western Ukraine with Ukrainian President Volodymyr Zelenskyy. They discussed a range of issues including prisoner exchanges and an effort to get U.N. atomic energy experts to visit the Zaporizhzhia nuclear power plant in southern Ukraine.

The facility has been controlled by Russian forces since shortly after the invasion began on Feb. 24 and has been the target of a number of explosions. Kyiv and Moscow accuse each other of shelling the plant, stoking international fears of a catastrophe on the continent.

Turkish President Recep Tayyip Erdogan said he would follow up with Russian President Vladimir Putin, given that most of the matters discussed would require the Kremlin’s agreement. 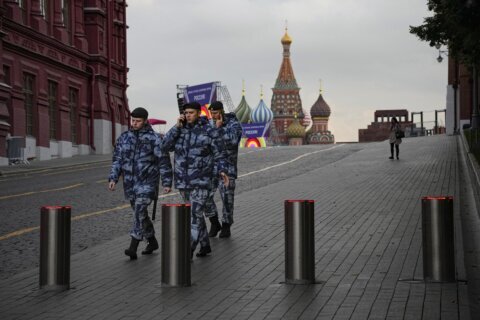