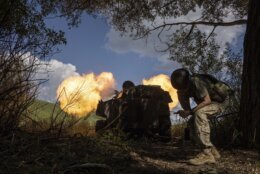 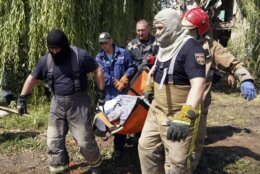 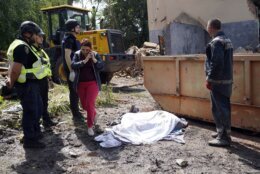 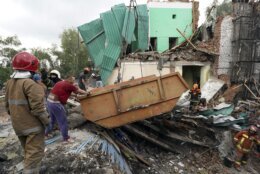 Ukraine also claimed to have destroyed an enemy ammunition depot, artillery pieces and other military equipment in the region, killing 51 members of the Russian army. There was no immediate confirmation from the Russian side.

The Antonivskyi Bridge over the Dnieper River was attacked late Tuesday, according to Kirill Stremousov, deputy head of the Moscow-appointed administration for the Kherson region. The bridge was left standing, but holes in its deck prevented vehicles from crossing the 1.4-kilometer (0.9-mile) span, he said.

After previous Ukrainian attacks damaged the bridge last week, it was closed to trucks, but it had remained open for passenger vehicles until the latest strike.

Russian forces in recent days have intensified their shelling of cities and villages in eastern Ukraine while also stepping up airstrikes in the south. At the same time, the Kremlin’s troops are facing mounting counterattacks from the Ukrainians in the Kherson region, which was captured by Moscow early in the war.

The HIMARS has greater range, much more precision and a faster rate of fire than the Soviet-designed Smerch, Uragan and Tornado rocket launchers used by both Russia and Ukraine. The weapons were among the billions of dollars in Western military aid that has helped Ukraine fight off the Russians since the Feb. 24 invasion.

— Ukrainian President Volodymyr Zelenskyy claimed that Russia has lost nearly 40,000 soldiers in the war and that tens of thousands more were wounded. His claim could not be independently verified. The Russian military last reported its losses in March, when it said 1,351 troops had been killed.

— Turkey’s defense minister said preparations were underway for the resumption of grain shipments from Ukraine’s Black Sea ports. Russia and Ukraine signed agreements last week to free up millions of tons of grain trapped by the fighting, potentially easing the global food crisis.

— At least two civilians were killed and three wounded when Russian forces shelled a hotel in the eastern city of Bakhmut, Ukrainian emergency authorities said. Bakhmut has been a focus of the Russian offensive in the region.

While halting traffic across the Dnieper River bridge makes only a slight dent in the overall Russian military operation, the attack was a morale-boosting victory for the Ukrainians.

Ukrainian presidential adviser Mykhailo Podolyak said on Twitter that the “occupiers should learn how to swim across” the Dnieper or “leave Kherson while it is still possible.” “There may not be a third warning,” he tweeted.

The bridge is the main crossing over the Dnieper in the Kherson region. The only other option is a dam at a hydroelectric plant in Kakhovka, which also came under Ukrainian fire last week but has remained open.

Knocking the crossings out would make it hard for the Russian military to keep supplying its forces in the region.

“We are doing all we can so that the occupiers have no logistical capabilities remaining on our land.” Ukraine’s president said during his nightly video address, noting the attack on the Antonivskiy bridge and other crossings in the region.

“Of course, they will all be rebuilt, but it will be us rebuilding them,” Zelenskyy added.

The accurate targeting of the bridge contrasted with Russia’s indiscriminate shelling of civilian areas since the invasion five months ago.

The governor of Dnipropetrovsk, in the east-central part of the country, said Wednesday that Russian forces struck two regions with artillery. Gov. Valentyn Reznichenko said a woman was wounded in the town of Marhanets and several apartment buildings, a hospital and a school were damaged by the shelling.

“Chaotic shelling has no other goal but to sow panic and fear among the civilian population,” he said.

The bulk of the Russian forces are fighting in Ukraine’s eastern industrial heartland, known as the Donbas, where they have made slow gains in the face of ferocious Ukrainian resistance.

They have taken some ground northeast of Bakhmut, according to the Institute for the Study of War, a Washington think tank. But it said Russian forces are unlikely to occupy significant additional territory in Ukraine before early autumn.