In the two months since the Azovstal's fighters surrendered, ending their dogged defense of the sprawling plant that became a symbol of Ukrainian tenacity in the war against Russia, few families and friends of those killed or captured have been able to find closure.
Listen now to WTOP News WTOP.com | Alexa | Google Home | WTOP App | 103.5 FM

KYIV, Ukraine (AP) — When he gave himself up to Russian forces in May at the pulverized Azovstal steel mill in Mariupol, the wounded Ukrainian soldier could not say a proper goodbye to his slain friend, whose body had to be left behind with hundreds of other dead.

The former prisoner of war, who goes by the name of David, finally got his chance Thursday at a Kyiv crematorium.

Moving carefully on crutches after his left leg was amputated, David and other soldiers bade farewell to Ilya Honcharov, whose coffin was draped in the yellow-and-blue Ukrainian flag.

“A sweet death in agony for you,” they intoned. “I will dissolve in you and live forever in you.”

David is one of the few POWs from the Azovstal siege that Russia has freed in an exchange.

And the body of the 26-year-old Honcharov, among hundreds the two sides also have swapped even as they fight each other, is one of the very few that Ukrainian authorities have been able to identify. His brother recognized one of his tattoos.

In the two months since the Azovstal’s fighters surrendered, ending their dogged defense of the sprawling plant that became a symbol of Ukrainian tenacity in the war against Russia, few families and friends of those killed or captured have been able to find closure.

Still unanswered are gnawing questions of how, where and when loved ones died. Some remains may never be recovered.

If Ukrainian forces one day liberate Mariupol, some families hope to at least get handfuls of dirt from the city that was bombarded almost into oblivion. A killing field for thousands of civilians, the charred ruins are hallowed ground for families of soldiers killed trying to prevent the strategic city and its port from falling into Russian hands.

More than 2,000 Azovstal defenders marched out of its twisted wreckage into Russian captivity in mid-May, ending the nearly three-month siege of Mariupol. Their families still don’t know when — or even whether — they might come home.

David was among 144 Ukrainian soldiers — including 95 who fought in Mariupol — that Russian forces turned over June 29 in a prisoner exchange.

He’s still not able to talk about his six weeks in captivity for fear of jeopardizing the release of other POWs and he did not want to be identified by his full name.

But David spoke willingly about his friend Honcharov, who had been mangled by a mortar round that shattered bones in his arms and legs, and embedded shrapnel in his back. Honcharov had clung to life for hours through his pain, and his comrades dragged to cover in a basement after nightfall, moving through the plant’s hellscape of twisted metal, overturned cars and shattered concrete.

“I don’t know how he kept himself so brave. I could not stand such pain,” David said.

Honcharov died May 16, the day that marked the beginning of the end of the Mariupol siege. That was when Azovstal’s remaining defenders started surrendering — the last Ukrainian holdouts in the occupied city. They had largely exhausted their supplies and been told by commanders they had completed their mission of tying down and bleeding Russian forces for as long as possible.

A fortunate few were flown out in low-flying helicopters before the surrender in a series of daring and sometimes deadly clandestine rescue missions. But more than 2,400 remained trapped and turned themselves over to Russian forces. They included David, who had part of his left leg blown off by an anti-tank missile hours before the May 16 surrender began.

The survivors left behind hundreds of bodies — Honcharov’s among them. It was returned to Kyiv in one of six exchanges of remains. The swaps have included the bodies of more than 400 soldiers who fell in Mariupol, including at Azovstal. How many remain isn’t known.

“I think we will never know the exact number,” said Olena Tolkachova, who works with the Azov Regiment, one of the Ukrainian units that defended the steel mill. She heads the regiment’s specialized service that arranges medical care for its wounded and funerals for its dead. It also fields endless calls from families asking for news of prisoners and whether remains have been identified.

The last exchange was July 19. Each side gives the other 45 bodies, meeting and signing paperwork before going their separate ways. Bodies that Russian forces have turned over have been from a variety of Ukrainian units. Some body bags are marked “Azovstal” or “Mariupol,” but most are simply labeled “Ukrainian.”

DNA testing is needed to identify most of the remains. Just 2% to 3% are identified with personal belongings, soldiers’ uniforms or distinguishing marks including tattoos, Tolkachova said.

Bodies come without information about exactly where they were found. But Tolkachova and her colleagues who volunteer at the Kyiv morgue have learned that if there’s sand on a body, then it most likely was buried on the shore near the Azovstal mill, which backs onto the Sea of Azov.

“We are working and will continue to work until our last hero is decently buried, until the last wounded person is healed and brought back to life, until every family is reunited with their children,” Tolkachova said. “The consequences of this war will be with us until the end of our lives.” 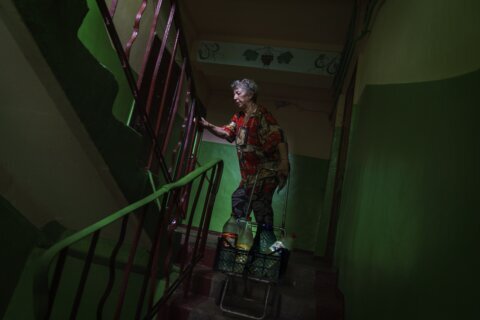