The lush green beauty of a pine forest and singing birds contrasted with the violent deaths of newly discovered victims of Russia's war in Ukraine, as workers exhumed bodies from another burial site near Bucha on Kyiv's outskirts.
Listen now to WTOP News WTOP.com | Alexa | Google Home | WTOP App | 103.5 FM

BUCHA, Ukraine (AP) — The lush green beauty of a pine forest with singing birds contrasted with the violent deaths of newly discovered victims of Russia’s war in Ukraine, as workers exhumed bodies from another mass grave near the town of Bucha on Kyiv’s outskirts.

The hands of several victims were tied behind their backs. The gruesome work of digging up the remains coincided with the Ukrainian police chief’s report that authorities have opened criminal investigations into the killings of more than 12,000 people since Russia’ invaded Ukraine on Feb. 24.

Workers wearing white hazmat suits and masks used shovels to exhume bodies from the soil of the forest, marking each section with small yellow numbered signs on the ground. The bodies, covered in cloth and dirt, attracted flies.

“Shots to the knees tell us that people were tortured,” Andriy Nebytov, head of the Kyiv regional police, said at the scene. “The hands tied behind the back with tape say that people had been held (hostage) for a long time and (enemy forces) tried to get any information from them.”

Since the withdrawal of Russian troops from the region at the end of March, authorities say they have uncovered the bodies of 1,316 people, many in mass graves in the forest and elsewhere.

The horrors of Bucha shocked the world after Russian troops left. The mass grave that reporters saw Monday was just behind a trench dug out for a military vehicle. The bodies of seven civilians were retrieved. Two of the bodies were found with their hands tied and gunshot wounds to the knees and head, Nebytov said.

National police chief Igor Klimenko told the Interfax-Ukraine news agency on Monday that criminal investigations into the deaths of more than 12,000 Ukrainians included some found in mass graves. He said the mass killings also were done by snipers firing from tanks and armored personnel carriers. Bodies were found lying on streets and homes, as well as in mass graves.

He didn’t specify how many of the more than 12,000 were civilians and how many were military.

Complete information about the number of bodies in mass graves or elsewhere isn’t known, Ukrainian President Volodymyr Zelenskyy told the American Jewish Committee on Sunday. He cited the case of two children who died with their parents in the basement of an apartment building in Mariupol in a Russian bombing. Zelenskyy, who is Jewish and lost relatives in the Holocaust, asked:

“Why is this happening in 2022? This is not the 1940s. How could mass killings, torture, burned cities, and filtration camps set up by the Russian military in the occupied territories resembling Nazi concentration camps come true?”

— The battle of Donbas could prove decisive in Ukraine war

Ukrainian President Volodymyr Zelensky said Ukrainian forces had driven the Russians out of more than 1,000 settlements since the war began, and he vowed Monday they would liberate all occupied territory, including Crimea, which Russia annexed in 2014.

In his nightly video address, he said the battle over the Donbas “will surely go down in military history as one of the most brutal battles in and for Europe.”

“The price of this battle for us is very high,” he said. “It’s just terrible.”

Amnesty International, in a report Monday, accused Russia of indiscriminate use of banned cluster munitions in strikes on Kharkiv, killing and wounding hundreds of civilians.

“The repeated use of widely banned cluster munitions is shocking, and a further indication of utter disregard for civilian lives,” said Donatella Rovera, Amnesty International’s senior crisis response adviser. “The Russian forces responsible for these horrific attacks must be held accountable for their actions, and victims and their families must receive full reparations.”

The report cited doctors in Kharkiv hospitals who showed researchers distinctive fragments they had removed from patients’ bodies, as well as survivors and witnesses of the attacks.

Luhansk governor Serhiy Haidai told The Associated Press that fierce street fighting continued Monday in Sievierodonetsk, one of two large cities in the Donbas region still to be fully captured by Russian troops.

During the day, Haidai updated his estimate of how much of the city Russians control from 70% to 80%. Ukrainian forces are fighting the enemy “block by block, street by street, house by house with a varying degree of success,” he told The AP.

More than 10,000 people remain in the city. Haidai said efforts to evacuate them have been halted because Russian troops destroyed two of the three bridges connecting Sievierodonetsk and Lysychansk, the second city in Luhansk not yet overrun by Moscow. The remaining bridge is old, decrepit and unsafe, the governor said.

Lysychansk remains under Ukrainian control, but is regularly shelled by the Russian forces. On Sunday, Haidai said, the shelling killed three civilians in the city, including a 6-year-old boy.

Eduard Basurin, an official of the Russia-backed separatists in Donetsk, claimed Monday that Sievierodonetsk has been blocked off and Ukrainian fighters have no choice but to surrender. Haidai dismissed that as “a lie.”

“There is no threat of our troops being encircled in the Luhansk region,” he said.

Russia-backed separatists in the Donetsk region said Monday that the Ukrainian forces shelled a market in the city of Donetsk, killing three civilians and injuring 18 more. It was the fiercest shelling by Ukrainian forces since 2015, according to the Russian news agency RIA Novosti.

The head of the Russian-backed government in Donetsk, Denis Pushilin, also cited heavy shelling, and said on his Telegram channel that more forces — especially Russians — were being called in to help.

The Russian military said Monday it destroyed “a large number of weapons and military equipment” that Ukrainian forces had received from the U.S. and Europe.

Two batteries of multiple-launch rocket systems were destroyed in the Luhansk and Kharkiv regions, Konashenkov said.

There was no immediate confirmation of the Russian claim from Ukraine.

The Dutch government said it will host a ministerial conference next month on accountability in Ukraine aimed at strengthening and coordinating war crimes investigations.

Foreign Minister Wopke Hoekstra said Monday that the international community already has taken swift action to investigate alleged atrocities in Ukraine but there is “an urgent need to further coordinate existing efforts on this front.”

The July 14 meeting in The Hague will be hosted by the Dutch government, International Criminal Court Prosecutor Karim Khan and European Commissioner for Justice Didier Reynders.

Khan already has launched an investigation and deployed his largest ever team of prosecutors to Ukraine to gather evidence, including to Bucha, near the capital of Kyiv, where bodies littered the streets after Russian forces retreated early in the war. 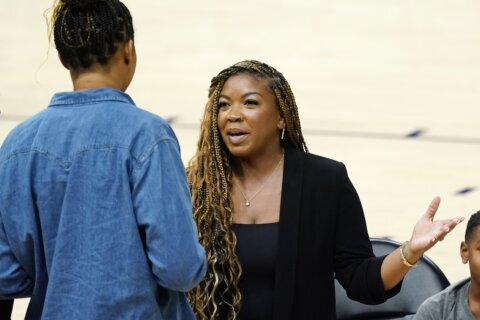