MOSCOW (AP) — The chairman of the African Union, Senegal’s President Macy Sall, told Russian President Vladimir Putin on Friday that the fighting in Ukraine and Western sanctions had worsened food shortages, and appealed to other countries to ensure grain and fertilizer exports aren’t blocked.

For his part, Putin blamed the West for emerging global food and energy crises and repeated his government’s offers of safe passage for ships exporting grain from Ukraine, one of the world’s leading exporters of wheat and corn.

“We will facilitate the peaceful passage and guarantee the safety of arrivals to these ports, as well as the entry of foreign ships and their movement through the Azov and Black seas, in any direction,” Putin pledged, in remarks carried on Russian state TV after his meeting with Sall in the Black Sea city of Sochi.

Ukraine and its allies have said that Russia is to blame for blocking Ukraine’s grain exports, because of threats to shipping from Russian naval vessels. Ukraine also fears that opening up safe corridors to Ukrainian ports could make them vulnerable to Russian attack.

African countries are especially hard hit by the food shortages and price increases. They imported 44% of their wheat from Russia and Ukraine between 2018 and 2020, according to U.N. figures, and wheat prices have soared around 45% as a result of the supply disruption, according to the African Development Bank.

Russia, the world’s largest wheat exporter, has urged the West to lift sanctions imposed over its military action in Ukraine so that grain starts flowing freely to global markets. While food and fertilizer are exempt, sanctions have targeted Russian shipping and made international shipping companies reluctant to transport Russian cargoes.

“The fact that this crisis brought the cessation of exports from Ukraine, but also from Russia because of sanctions, we have found ourselves in between these two,” Sall told reporters. “It’s of absolute necessity that they (Western partners) help to facilitate the export of Ukrainian grains, but also that Russia is able to export fertilizers, food products, but mainly cereals.”

In citing the sanctions as a contributing factor, Sall is partly supporting Putin’s explanations. The Russian president appears to be attempting to drive a wedge in international support for sanctions and emphasize that other countries are suffering more than Russia, in terms of inflation, shortages of goods, the burden of refugees from Ukraine, increasing inflation, and the costs of economic and military aid to Ukraine.

Britain last week accused Russia of “trying to hold the world to ransom” by demanding relief from Western sanctions to allow grain exports.

“Russia has played hunger games recently to put the blame on Ukraine and others for blocking Ukrainian food exports,” Yevheniia Filipenko, Ukraine’s envoy to the U.N. office in Geneva, said in an interview Friday.

Putin on Friday again denied blocking Ukrainian ports, and said it was a “bluff” to blame Russia.

“Of course, we are now seeing attempts to shift the responsibility for what is happening on the world food market, the emerging problems in this market, onto Russia,” he said. on Russian TV. “I must say that this is an attempt, as our people say, to shift these problems from a sick to a healthy head.”

Putin on Friday proposed several corridors to allow foreign ships safely to leave ports along the Black and Azov seas. He said Odesa and other ports under Ukrainian control could be used for exports after mines are removed and also those now under Russian control – Berdyansk and Mariupol. He also suggested moving grain through other countries such as neighboring Belarus.

“The question is how to make sure that Russia doesn’t abuse the trade route to attack the city of Odesa,” Kuleba tweeted. “No guarantees from Russia so far. We seek solutions together with the UN and partners.”

Sall noted problems with the Belarus option. “Another way is to pass through Belarus, but Belarus is also under sanctions, although it’s the most direct way in reality, through Belarus to the Baltic Sea,” he said.

The supply chain issues brought on by the fighting in Ukraine come as large portions of Africa already were grappling with drought and other problems.

Senegal was one of 17 African nations that abstained from voting on the U.N. resolution condemning Russia’s military action in Ukraine. According to the partial Kremlin transcript, Sall told Putin many African countries didn’t condemn Moscow despite what he described as strong pressure to do so.

With the conflict in Ukraine now in its fourth month, world leaders have ramped up calls for solutions. World Trade Organization Director-General Ngozi Okonjo-Iweala said about 25 million tons of Ukrainian grain are in storage and another 25 million tons could be harvested next month. 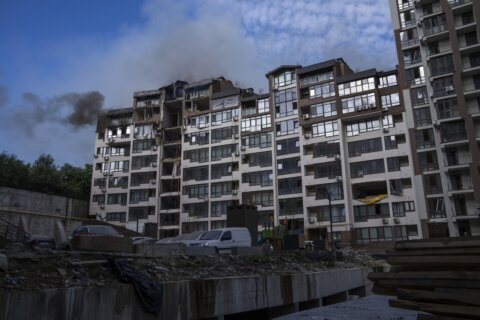