Push to arm Ukraine putting strain on US weapons stockpile 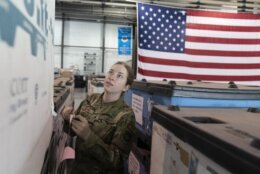 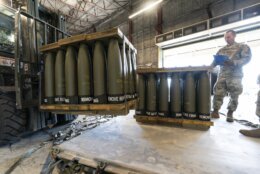 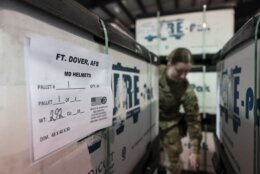 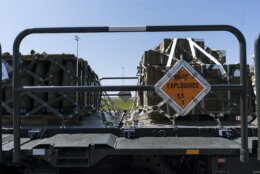 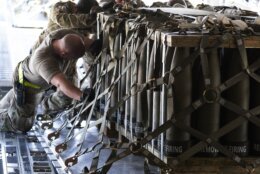 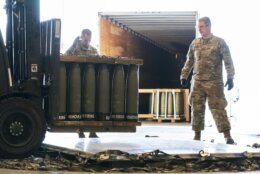 WASHINGTON (AP) — The planes take off almost daily from Dover Air Force Base in Delaware — hulking C-17s loaded up with Javelins, Stingers, howitzers and other material being hustled to Eastern Europe to resupply Ukraine’s military in its fight against Russia.

The game-changing impact of those arms is exactly what President Joe Biden hopes to spotlight as he visits a Lockheed Martin plant in Alabama on Tuesday that builds the portable Javelin anti-tank weapons that have played a crucial role in Ukraine.

But Biden’s visit is also drawing attention to a growing concern as the war drags on: Can the U.S. sustain the cadence of shipping vast amounts of arms to Ukraine while maintaining the healthy stockpile it may need if a new conflict erupts with North Korea, Iran or elsewhere?

The U.S. already has provided about 7,000 Javelins, including some that were delivered during the Trump administration, about one-third of its stockpile, to Ukraine, according to an analysis by Mark Cancian, a senior adviser with the Center for Strategic and International Studies international security program. The Biden administration says it has committed to sending about 5,500 to Ukraine since the Russian invasion more than two months ago.

Analysts also estimate that the United States has sent about one-quarter of its stockpile of shoulder-fired Stinger missiles to Ukraine. Raytheon Technologies CEO Greg Hayes told investors last week during a quarterly call that his company, which makes the weapons system, wouldn’t be able to ramp up production until next year due to parts shortages.

“Could this be a problem? The short answer is, ‘Probably, yes,’” said Cancian, a retired Marine colonel and former government specialist on Pentagon budget strategy, war funding and procurement.

He said that Stingers and Javelins were where “we’re seeing the most significant inventory issues,” and production of both weapons systems has been limited in recent years.

The Russian invasion offers the U.S. and European defense industry a big opportunity to bolster profits as lawmakers from Washington to Warsaw are primed to increase defense spending in response to Russian aggression. Defense contractors, however, face the same supply chain and labor shortage challenges that other manufacturers are facing, along with some others that are specific to the industry.

Military spending by the U.S. and around the world was rising even before Russia’s Feb. 24 invasion. Biden’s proposed 2023 budget sought $773 billion for the Pentagon, an annual increase of about 4%.

Globally, total military spending rose 0.7% to more than $2 trillion for the first time in 2021, according to an April report from the Stockholm International Peace Research Institute. Russia ranked fifth, as its spending on weapons increased ahead of its invasion of Ukraine.

The war will mean increased sales for some defense contractors, including Raytheon, which makes the Stinger missiles Ukrainian troops have used to knock out Russian aircraft. The company is also part of a joint venture with Lockheed Martin that makes the Javelins.

Biden will visit Lockheed Martin’s facility in Troy, Ala., which has the capacity to manufacture about 2,100 Javelins per year. The trip comes as he presses Congress to quickly approve his request for an additional $33 billion in security and economic assistance for Kyiv, Western allies and restocking weapons the U.S. has sent to those countries.

Senate Majority Leader Chuck Schumer, D-N.Y., said Monday he hoped quick bipartisan agreement on the security package could be reached so the Senate could begin considering it “as early as next week.”

The president is expected to use his remarks to highlight the importance of the Javelins and other U.S. weaponry in helping Ukraine’s military put up a vigorous fight as he makes the case to keep security and economic assistance flowing.

A White House official, who was not authorized to comment publicly and requested anonymity, said the Pentagon is working with defense contractors “to evaluate the health of weapons systems’ production lines and examine bottlenecks in every component and step of the manufacturing process.” The administration is also considering a range of options, if needed, to boost production of both Javelins and Stingers, the official said.

Pentagon press secretary John Kirby said Monday that America’s military readiness is not dependent on one system, such as the Javelin. He said that every time the Pentagon develops a package of weapons to send to Ukraine, the chairman of the Joint Chiefs of Staff and the department assesses the broader impact.

“It’s not about counting say Javelins and being able to say that when you reach a certain level then all your readiness is gone,” Kirby said. “The Javelin is an anti-armor capability, so we judge it all as a conglomerate of what’s our ability to meet this particular mission set, realizing that a Javelin isn’t the only capability you have against armor.”

Cancian, the former government specialist on defense budget strategy, said the fact that Stingers and Javelins were not included in the most recent tranche of weapons the Biden administration announced it was sending to Ukraine could be a sign that Pentagon officials are mindful about inventory as they conduct contingency planning for other possible conflicts.

“There’s no question that whatever war plan they’re looking at there is risk associated with the depleting levels of Stingers and Javelins, and I’m sure that they’re having that discussion at the Pentagon,” he said.

The U.S. military effort to move weaponry to Eastern Europe for Ukraine’s fight has been Herculean. From Dover Air Base in Delaware, U.S. airmen have carried out nearly 70 missions to deliver some 7 million pounds of Javelins, Stingers, 155mm howitzers, helmets and other essentials to Eastern Europe since February. Col. Matt Husemann, commander of the 436th Airlift Wing, described the mission as a “whole of government approach that’s delivering hope.”

“It is awesome,” said Husemann, after providing AP with a recent tour of the airlift operation.

The lightweight but lethal Javelin has helped the Ukrainians inflict major damage on Russia’s larger and better-equipped military. As a result, the weapon has gained almost mythic regard, celebrated with a Javelin song and images of Mary Magdalene carrying a Javelin becoming a meme in Ukraine.

Lockheed Martin CEO James Taiclet said in a recent CNBC interview that demand for the Javelin and other weapon systems would increase broadly over time because of the Russian invasion. He said the company was working “to get our supply chain ramped up.”

“We have the ability to meet current production demands, are investing in increased capacity and are exploring ways to further increase production as needed,” Lockheed Martin said in a statement.

Pentagon officials recently sat down with some of the leading defense contractors, including Lockheed Martin, Raytheon, Boeing, General Dynamics, BAE Systems and Northrop Grumman to discuss efforts to ramp up production.

Raytheon, for example, can’t simply crank out Stingers to replace the 1,400 that the U.S. sent to Ukraine. Hayes, the Raytheon CEO, said in a recent conference call with analysts that the company has only limited supplies of components to make the missile. Only one undisclosed country has been buying them in recent years, and the Pentagon hasn’t bought any new ones in nearly 20 years.

Sanctions further complicate the picture. Companies must find new sources of important raw materials such as titanium, a crucial component in aerospace manufacturing that is produced in Russia.

Concerns about the Stinger stockpile have been raised by House Armed Services Committee chairman Rep. Adam Smith, D-Wash., and the top Republican on the committee, Rep. Mike Rogers of Alabama. The two in March wrote to Defense Secretary Lloyd Austin and Chairman of the Joint Chiefs of Staff Mark Milley, describing the stockpile issue as one of “urgency.”

Rogers said he remains concerned that the matter hasn’t been properly addressed.

“I’ve been asking the DoD for almost two months for a plan to replenish our Stinger stockpile as well as our Javelin launch units,” Rogers said. “I worry that without a readily available replacement or fully active production lines, we could leave Ukraine and our NATO allies in a vulnerable position.”

Reeves reported from Birmingham, Ala., and Huff from Dover Air Force Base, Delaware. Associated Press writers Lolita C. Baldor and Alan Fram in Washington contributed to this report. 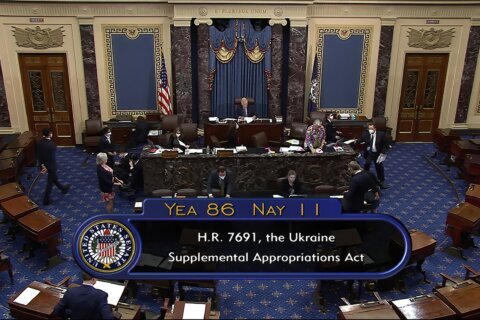