KYIV, Ukraine (AP) — There is a cost to war — to the countries that wage it, to the soldiers who fight it, to the civilians who endure it. For nations, territory is gained and lost, and sometimes regained and lost again. But some losses are permanent. Lives lost can never be regained. Nor can limbs.

And so it is in Ukraine.

The stories of the people who undergo amputations during conflict are as varied as their wounds, as are their journeys of reconciliation with their injuries. For some, losing a part of their body can be akin to a death of sorts; coming to terms with it, a type of rebirth.

For soldiers wounded while defending their country, their sense of purpose and belief in the cause they were fighting for can sometimes help them cope psychologically with amputation. For some civilians, maimed while going about their lives in a war that already terrified them, the struggle can be much harder.

For the men, women and children who have lost limbs in the war in Ukraine, now in its third month, that journey is just beginning.

The explosion that took Olena Viter’s left leg also took her son, 14-year-old Ivan, a budding musician. Her husband Volodymyr buried him, along with another boy killed in the same blast, under a guelder rose bush in their garden. Amid the fighting, they couldn’t get to the cemetery.

“How am I going to live without Ivan? He will remain in my heart forever, like the fragment that hit him,” she said. When she’s alone, Olena cries.

Bombs rained down on Olena’s village of Rozvazhiv, in the Kyiv region, on March 14. Ivan and four others died; Olena was one of about 20 who were wounded.

At first, “I was thinking, ‘Why did God leave me alive?’” said Olena, 45, her soft voice breaking. Hearing Ivan was dead, she begged a neighbor to get his rifle and shoot her.

But Volodymyr pleaded with her, saying he couldn’t live without her.

“Every day I get used to some new type of pain. I am thinking what kind of new pain will I see in the future,” she said.

She has yet to accept either of her losses.

“I am still not accepting myself as I am now,” Olena said. “I really liked to dance. I was doing sports. I don’t know, I need to learn.” She can’t yet imagine what it will be like to walk again.

Perhaps, Olena said, her life was spared because she was meant to do something, to help others, perhaps as a volunteer or by donations to a music school in Ivan’s memory.

“At the moment, I don’t know what I would want to do. I should keep searching. … I must learn how to live. How? I do not know yet.”

Devastation struck out of a clear blue sky for Yana Stepanenko. On April 8, the 11-year-old went to the eastern city of Kramatorsk with her mother, Natasha, and twin brother Yarik to board an evacuation train.

Yarik stayed in the station to guard their luggage while Yana and her mother went outside to buy tea.

A missile hit, and the world went black, and silent. Natasha fell. She couldn’t stand. She looked over and saw her little girl, her leggings dangling where her feet should be. Blood was everywhere.

The injuries to mother and daughter were devastating. Yana lost two legs, one just above the ankle, the other higher up her shin. Natasha lost her left leg below the knee.

Yarik was uninjured and has been reunited with his mother and sister. The children’s father died of cancer several years ago, and their stepfather is fighting at the front. So now the little boy cares for his mother and sister, running around the hospital corridors, fetching wheelchairs and bringing food.

“Sometimes it seems like it happened not to us,” she said, crying softly.

She worries most about her daughter. “I cannot help her as a mother, I cannot pick her up, or help her move,” she said. “I can only support her with my words from my bed.”

Yana, like children everywhere, is eager to be up and about.

Yana misses her home and her friends and is looking forward to getting prosthetics.

Alexander Horokhivskyi, known as Sasha, is in pain. And he is angry. He winces as he rubs the stump of his left thigh where his leg was amputated on April 4, nearly two weeks after he was injured.

Sasha was shot in the calf by his own side. A territorial defense member mistook him for a spy because he was snapping photos of bombed buildings near his home in Bobrovytsya, a city in the Chernihiv region, after emerging from a bomb shelter.

He was questioned for about 90 minutes at a police station before being taken to an overwhelmed hospital. Days later, he was moved to a hospital in the capital, Kyiv, where doctors decided they had to take his leg to save his life.

The 38-year-old, an avid table tennis player, only found out about the amputation when he awakened from surgery.

“How did they dare do all that without my consent?” he railed. Between the drugs and the pain, he doesn’t remember much. “I swore a lot.”

His journey has been painful, both physically and psychologically. He worries whether he’ll be able to play sports again, or travel. And the injustice of it all weighs on him.

“I try to understand how it could happen. Especially during the first week, I couldn’t think about anything else.” It would be different if he was wounded while fighting. “But to be injured in such a way was very hard.”

Still, he’s spoken with a psychologist, and he’s come a long way from those initial dark days. “It does not make sense to return to this moment,” he said. “Because you can’t change anything.”

There had been no electricity or running water for two or three days in the Chernihiv basement where Nastia Kuzik, her parents, her brother, and another 120 people had taken shelter. Tired of the dark, she decided to go to her brother’s house nearby — just for a while.

Walking back toward the bomb shelter, the 21-year-old heard the noise: “tsch, tsch, tsch.” She ran. She was just a few steps from the entrance when the explosion flung her to the ground.

She drifted in and out of consciousness. Every time she opened her eyes, her brother was there, telling her everything would be OK. But nothing would ever be the same.

Doctors worked hard to save her leg, but it just wasn’t possible. Her lower right leg was amputated below the knee. Her other leg was badly broken.

Now, gradually, as she goes through painful physical therapy, reality is sinking in.

“I am accepting it,” she said. Nastia’s usually bright, cheerful disposition falters. A tear runs down her cheek. “I had never thought it would ever happen to me. But since it did, what can I do?”

She’s working hard to be optimistic. A German speaker, she has tutored children in the language, and she’s always wanted to study in Germany. In early May, she was evacuated to a specialized rehabilitation facility in Leipzig.

This was not the way wanted her dream to come true, but she said she’s going to make the most of it.

Lidiya Gladun had lost contact with 22-year-old Anton, a military medic deployed on the front lines in eastern Ukraine, for about three weeks. Then someone sent her a Facebook post by a nurse in a hospital in Kharkiv. They had an Anton Gladun in their hospital. Did anybody know him?

Lidiya contacted the nurse, who was sparing with information on Anton’s condition. When he was well enough to do so, Anton phoned his mother. He asked her to bring some clothes to the hospital. “He was mentioning flip-flops, and then he said he didn’t need flip-flops anymore.”

He believes it was a cluster bomb that struck his unit as it retreated on March 27. Anton lost both legs and his left arm, and his right arm was injured.

For days, Anton had been in a coma. When he regained consciousness, he said, “I was smiling, like everything was OK, basically. I was thinking that the most important thing was that I was alive.”

But he was haunted by nightmares and horrific hallucinations. A volunteer psychologist visited him, and with his help the hallucinations subsided. He no longer has nightmares. He doesn’t really dream at all.

He’s eager to get his prosthetics and start walking. He figures his military career is probably over, but he wants to study information technology.

What helps, he said, “is my understanding that if I would be sad, would cry because of what happened, then it would only be worse.”

EDITOR’S NOTE — AP photojournalist Emilio Morenatti lost his left leg while covering the conflict in Afghanistan in 2009. “When a part of your body is amputated, you cross over into the disabled community, and a camaraderie inevitably develops,” he said. “My need to access this group is above any kind of impediment: I’m fascinated by comparing experiences, amputee to amputee. This is why I’m no longer interested in covering the war from the front line, but rather from behind the front lines, where the only thing that remains is the raw testimony of the cruelty marked by this damned war.” 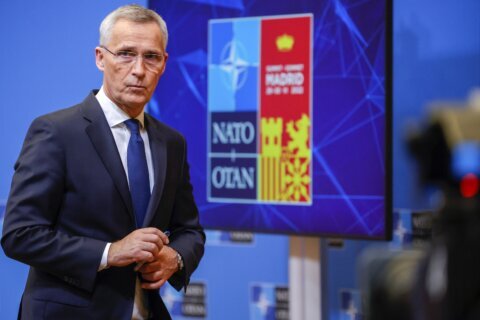